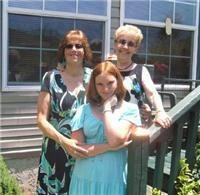 BORN
1964
DIED
2021
FUNERAL HOME
Curtis-Britch & Bouffard Funeral Homes - Barton
12 Elm Street
Barton, VT
Tammy E. Westover, 56, of Newport Center, VT passed away unexpectedly on January 8, 2021. She was born on September 25, 1964, and was adopted by her parents, Robert and Rachel Westover just 13 days later. Tammy graduated from Sacred Heart high school in 1982. She attended the University of Maine Farmington and graduated with her degree in Special Education in 1986. Tammy worked for various schools, the foster care program and youth organizations throughout her 35 year career, dedicating her life to the education and lives of the children, teens and young adults she worked with. Tammy moved to North Carolina in 2004, continuing her work with children at Rosman Middle-High School. At this school, she met Victoria, who would become her foster daughter, and then her adopted daughter in June 2010. Tammy returned to Vermont in August 2011, to care for her mother. She continued her education career, working for non-profit independent day treatment schools, Turning Points in Morgan, VT and East Meadow School in Morrisville, VT. Tammy met her fiance', Leo Drakestream of Ottawa, Ontario, Canada in 2016.Tammy has left behind a legacy of love and devotion to the thousands of lives she touched in her personal and professional lives. She was a foster parent to many children throughout her foster parenting years, staying in touch with many of them up to her passing. Tammy loved to travel, and her favorite place was the beach. She was fond of saying that the beach was her happy place, and that the smell of salt water always brought her peace. Tammy enjoyed playing bingo, crafting, and most importantly spending time with her family and friends.
Tammy is predeceased by her parents, Robert and Rachel Westover of Newport Center, VT and her beloved dog, Jacy. She is survived by her fiancé, Leo Drakestream of Ottawa, Ontario Canada, daughter Victoria Rae Westover and her fiancé, Preston Judd of Johnson, VT, brother John Westover and wife Takako of Japan. She is also survived by her aunt Beverly Couture and husband Armand of Irasurg, VT and Sonja Bissonnette and her husband Norbert of Middletown, CT, as well as numerous nieces and cousins. She is also survived by her beloved friends, Christine Hetzel of Barre, VT, Cynthia Stone Sullivan of Orrington, ME, Jodi Gonyaw-Worth of Island Pond, VT and Heather Mason of Derby Line, VT, as well as numerous others.
A memorial service is being planned for the summer, when friends and family can gather safely following COVID restrictions. Should friends desire, in lieu of flowers, contributions in her name can be made to East Meadow School, 28 James Road, Morrisville, VT 05661. This is the organization that Tammy worked at up until her passing, and the place in which she felt strongly that the children she worked with could someday change the world, if only given an opportunity.
Online condolences can be left on her Facebook page and also at www.curtis-britch.com
Arrangements are entrusted to the care of the Curtis-Britch & Bouffard Funeral Home and Cremation Service. Locally family owned and operated.

Published by Newport Daily Express from Jan. 12 to Jan. 13, 2021.
To plant trees in memory, please visit the Sympathy Store.
MEMORIAL EVENTS
To offer your sympathy during this difficult time, you can now have memorial trees planted in a National Forest in memory of your loved one.
Funeral services provided by:
Curtis-Britch & Bouffard Funeral Homes - Barton
MAKE A DONATION
MEMORIES & CONDOLENCES
Sponsored by Curtis-Britch & Bouffard Funeral Homes - Barton.
12 Entries
Tammy you will be missed by Ava and our family ❤ may you rest now. We love you!
Ariel Nichols
Friend
January 19, 2021
Tammy, RIP my dear friend. I will miss our crazy conversations and your smile. Damn those RCA books really brought us together, even if it was the hate of them. Love you my friend, I will think of you often and smile....always.
C SMALL
Coworker
January 16, 2021
Tammy you were such a loving and caring person. Your passion for your students and profession were clear. You will be greatly missed by those who had the pleasure of knowing and working with you.
Angela Spencer
Coworker
January 15, 2021
Brian and I will miss you greatly. It was a great joy to know you. You were a great friend who always could make a person smile. R.I.P.
Theresa Mason
Friend
January 15, 2021
We will greatly miss Tammy. She was such a joy to everyone. My girls and son all had a special bond with her that was like no other. She could make anyone laugh and we will definitely miss our special trips to the beach with her. We love you Tammy.
Jen Kinney
Friend
January 15, 2021
I still dont have words to express how much I love and miss you Tammy. Your passing has left a huge he in my heart and in my life. I hope so deeply that heaven is a beach, where you can smell the salt water, hear the waves crashing in the sand and and feel the breeze against your face as you talk with your mom and dad again, and watch Jacy run along the sand.

If a person's worth is measured by how much they are missed when they are gone, your worth is immeasurable. Rest in peace my friend. I love you forever.
Heather Mason
Friend
January 15, 2021
She was a good teacher at North country high School special ed program
jolene corkins
Student
January 14, 2021
I will miss you so much Tammy. We've been friends for almost 37 years and I always treasure those memories.
Annie (Piper) Bullis
Friend
January 13, 2021
Although I never met tammy, Victoria told me so much about her and I'm here for the family in any way I can be.
Patricia Ashworth
Friend
January 13, 2021
I am sorry for your loss. I remember visiting with Tammy in North Carolina and in Vermont. My mother Elaine often visited Rachael and all of us went through the Biltmore in Asheville. Mallory an Elaine McWilliams
Mallory Mcwilliams
Family
January 12, 2021
Tammy was a very dear lifelong friend. My deepest sympathy to her family, friends, students and coworkers. She will be greatly missed.
Cindy Barlow
Friend
January 12, 2021
Armand, Beverly, and family, may God bless you and your family in this time of sorrow. We are sorry to hear this.
Layrry & Debbie Lacross
January 12, 2021
Showing 1 - 12 of 12 results