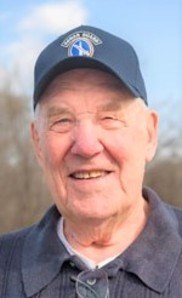 BORN
1930
DIED
2021
ABOUT
Mentor High School
FUNERAL HOME
Brunner Sanden Deitrick Funeral Home & Cremation Center
8466 Mentor Ave
Mentor, OH
James Ernest Lors of Leroy died November 28, 2021 at TriPoint Medical Center in Concord Twp. He was 91 years young.Jim was born on May 2, 1930 in East Claridon, OH. As the oldest of five children, he took care of his family very early— tending muskrat traps, fishing, cooking and working alongside his lumberjack father who labored in the woods for extended periods. He attended Mentor High School, distinguishing himself as captain of the football team, and graduating in 1950.In July 1951, Jim married his high school sweetheart, Norma Lapham. They began married life in Washington, DC while he served in the U.S. Army in the Presidential Honor Guard for Presidents Truman and Eisenhower. He liked to tell of the time he had the honor of escorting Queen Elizabeth (then Princess Elizabeth) to the door of a state dinner. He also played football for the US Army, and was highly sought after by a number of different colleges, as well as being asked to try out for the Cleveland Browns. After much debate and seeking God’s wisdom, he declined all offers and never regretted the life he chose— moving back to Mentor, OH in 1953 with his young wife and newborn, purchasing a home, raising their five children, and beginning his life-long career at Lubrizol. His values were firmly planted in the belief that slow, daily faithfulness produced better fruit than fast success.Jim was an avid gardener, tending his flower gardens as well as planting a large vegetable garden each and every year. He and his wife loved to sing and they often sang duets in church, car, and around the home. Both were very active in their local church and he led the church choir for most of his adult life. He also valued influencing young men for Christ, and volunteered at Stony Glen Camp in Madison for more than 50 years.He loved reading and studying the scriptures daily. He read the Bible completely through many times. He especially loved the book of Revelation, and would jump at every opportunity to teach its truths, whether in adult Sunday School classes or during conversation. In fact, the book of Revelation is where his children found his daily Bible reading marker when he died.Jim’s survivors include his children, Tim (Ginny) Lors of West Des Moines, IA; Becky Winnie of Fortville, IN; Dan (Beth) Lors of Ripon, WI; Debbie (Al) Spitler of Wautoma, WI; and David (Janice) Lors of St. Charles, IL. He also leaves behind 10 grandchildren; 20 great grandchildren; his brothers, Bud (Patty) Lors, Ed (Dixie) Lors, and his sister, Carol Patterson.He was preceded in death by his wife, Norma J. Lors; parents, Harry and Gladys Lors; and his brother, Chuck Lors.The family will receive friends to celebrate Jim’s life on Sunday, December 5 from 4-7 p.m. and again on Monday, December 6 from 9:30 a.m. - 10:15 a.m., followed by a funeral service at 10:30 a.m.Sunday’s Visitation will take place at Brunner Sanden Deitrick Funeral Home & Cremation Center, 8466 Mentor Ave., Mentor, OH 44060.Monday’s Visitation and Funeral will be held at Trinity Church, 9225 Johnnycake Ridge Rd., Mentor, OH 44060. Interment will be in Mentor Cemetery.The family requests memorial contributions be made to Stony Glen Camp, 5300 West Loveland Rd, Madison, OH 44057.Please offer condolences at www.brunners.com.

Published by News-Herald from Dec. 1 to Dec. 2, 2021.
To plant trees in memory, please visit the Sympathy Store.
MEMORIAL EVENTS
Dec
5
Visitation
4:00p.m. - 7:00p.m.
Brunner Sanden Deitrick Funeral Home & Cremation Center
8466 Mentor Ave., Mentor, OH
Dec
6
Visitation
9:30a.m. - 10:15a.m.
Trinity Church
9225 Johnnycake Ridge Rd, Mentor, OH
Dec
6
Funeral service
10:30a.m.
Trinity Church
9225 Johnnycake Ridge Rd., Mentor, OH
Funeral services provided by:
Brunner Sanden Deitrick Funeral Home & Cremation Center
MAKE A DONATION
MEMORIES & CONDOLENCES
Sponsored by news-herald.com.
2 Entries
We thoroughly enjoyed our conversations with Jim on our flight to Israel. What a special man. One of highlights of our time in Jerusalem was having Jim lead worship in the garden tomb. You could tell how much he loved His Savior by the joy on his face during worship. We are very grateful to have met him. Our condolences to all the family.
Rick and Norma Crawley
Friend
December 8, 2021
Celebrating in Heaven with Tom. Talking about their good old days at Lubrizol. Rest well
Doris Isner
December 2, 2021
Showing 1 - 2 of 2 results