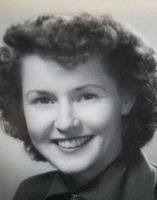 Bernice M. De Palma passed away peacefully on August 7, 2021, in Urbana, Ohio, at 91 years of age. She is survived by her husband of almost 70 years, James J. De Palma; a son, Tim De Palma; 2 daughters, Teri Teasley and Toni De Palma; 4 grandchildren, 5 great-grandchildren, and several nieces and nephews. She was predeceased by her daughter, Tami De Palma. She was the daughter of William C. and Almira H. Mac Kinnon, and sister to J. Charles Mac Kinnon and Doris R. Mac Kinnon.

Bernice was born in Franklin Lakes, Bergen County, New Jersey, and moved to Haworth shortly after, where she spent her young life on a dairy farm. She attended Dumont High School where she met and later married her sweetheart, James J. De Palma. They lived in Old Tappan for many years, raising 4 children and eventually relocating to Ormond Beach, Florida.

While in Florida, she was very active in her community and her children's lives, including golfing at Tomoka Oaks Country Club, scouting and sporting events. Bernice was a member of Prince of Peace Catholic Church. Her hobbies included gardening, sewing, playing softball, bowling, bird-watching and her grandchildren. She and her husband owned the Ormond Beach Answering Service in the early 1970's. In her later years she and her husband moved to Urbana, Ohio, to be near their daughter, Toni.

Bernice was very proud of and involved in her Scottish/Canadian heritage, something very near and dear to her heart. Although she never lived there, she leaves behind many family members in Canada.

In lieu of flowers, the family is requesting contributions in her name to the Atlantic Salmon Museum, founded by her cousins William and Audrey Mac Kinnon. Address: 263 Main Street, Doaktown, New Brunswick, Canada E9C 1 A9.


Published by Daytona Beach News-Journal from Aug. 19 to Aug. 22, 2021.
To plant trees in memory, please visit the Sympathy Store.
MEMORIAL EVENTS
To offer your sympathy during this difficult time, you can now have memorial trees planted in a National Forest in memory of your loved one.
Funeral services provided by:
Walter & Lewis Funeral Home
MAKE A DONATION
MEMORIES & CONDOLENCES
Sponsored by Daytona Beach News-Journal.
1 Entry
Joan Lally Radicia and family are deeply saddened to see you have passed. Growing up you, Betty McClain and Joan Lally were the Three Musketeers! Joan thanks you for all the class reunions you took care of for the class of 1947! I, Pat, am glad I got to meet you and Jim at one of the reunions, when I took my mother. Mom doesn't see well anymore, so I, Pat, am writing this for Joan who is 92 now. God bless you Bernice. You most definitely will be missed. Love to you, Jim and family. Fondly, Joan Lally Radicia, and Pat Radicia
Pat Radicia & Joan Lally Radicia
Friend
September 25, 2021
Showing 1 - 1 of 1 results