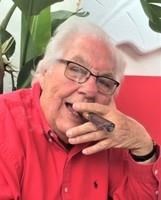 Bert Reames told his last story and passed away at 7:30 p.m. on 17 February, 2021 at home, in the arms of his devoted wife, Julie and their son, Dr. Roosevelt Harris.

Elbert Lile "Bert" Reames, Gator Bert, to his hundreds of friends was born in Gainesville, Florida, August 21, 1926, the son of Bert, Sr. and Maude Beard Reames and younger brother of his only sibling, Jane. Though he was a child of the depression, Bert had a happy childhood with fond memories and lifelong friends. Most people who met Bert anytime in his life were lifelong friends. Growing up in Gainesville, he nurtured his love of the University of Florida, had a paper route, and worked in his parents record store where he developed his love and knowledge of music.

After graduating from Gainesville High in 1944 and entering the University of Florida, he was called to serve his country in the Army Air Corps from 1944 to 1946 and spent most of that time in Panama. After his honorable discharge he moved to Springfield, Missouri where his parents had relocated and worked in his folks' A&W Root Beer stand, and finished his college degree at Drury College (now Drury University) in 1949.

Bert moved back to Florida in 1949, and fortunately for us, chose Daytona Beach. For 72 years he implemented his love and devotion to this community by dedicating his life to improving our area in many dimensions.

His first job here was with Sears Roebuck as a manager trainee. They wanted him to learn the business from the ground up, and Bert went to people's homes and hung window treatments. Certainly, they enjoyed his visits and got their money's worth in entertainment and conversation, as well as curtains.

He had to pay his bills, so in 1955 decided on a career in insurance. He became special agent and division manager for Prudential Insurance Company and moved rapidly up that ladder, becoming a Chartered Life Underwriter in 1964. In 1973 he partnered with Jay Adams at Guy B. Odom agency and successor companies, Jay Adams and Associates and HRH Insurance where he worked closely with the late Bob Hoitsma for many years. Bert was Vice President and established their Life and Employee Benefits departments.

In 1998, he and his wife and partner, Julie, established Bert Reames Insurance Services and its successor, Reames Employee Benefits Solutions where he was President and Chairman for the next 19 years until he partnered with his friend, Charlie Lydecker to become part of Foundation Risk Partners.

His community service contributions would fill several pages and are inspirational. It's a wonder he had time to sell insurance. He joined the Daytona Lions Club in 1950, and was President in 1962. He was a lifetime member of Masonic Lodge #270, Daytona Beach Association of Life Underwriters, University of Florida Alumni Association, American Society of Chartered Life Underwriters, American Red Cross where he was an extremely active member. He joined Daytona Rotary Club in 1970 and was President in 1987 and spearheaded a drive to raise $87000 for Polio Plus. He was a charter member of the Checkered Flag Committee of Daytona International Speedway and the Embry Riddle Board of Visitors and served as their president in 2001-2. He proudly served on the board of the United Negro College Fund and was Chairman twice, in 1977 and 2005. He was elected an honorary member of the Florida Blue Key Society in 1983, dedicated to public service of the University and our state of Florida.

He was a member of many social organizations including the Halifax River Yacht Club, Oceanside Country Club, The Daytona Beach Quarterback Club where he was Captain (1966) and served in every capacity, particularly as the main bus trip organizer, ticket seller, and fun manager at Gator games.

Bert's life long dedication to our community has not been unrecognized. His walls are papered with myriad honors that are too numerous to mention in their entirety. Alphabetically, he has been honored by Act, American Red Cross, Children's Advocacy Center, Council on Aging, Daytona State College, Duvall Home, Futures Foundation, Lou Fuchs Award from the Chamber of Commerce, Sax Lloyd Award from the Civic League, Tiger Bay, and many, many others.

Bethune Cookman University bestowed an honorary Doctor of Laws degree in 2016 in gratitude for Bert's lifetime support for that university.

Bert loved and supported Halifax Hospital and one of his proudest and most productive achievements was establishing the Halifax Medical Center Foundation, and serving as its first president from 1988 to 1991, and later served as its Secretary and Treasurer, and served on its board many years until his retirement from public life.

No document of this length can possibly catalogue Bert's substantial and meaningful contributions to our town. He was The Mr. Daytona, The Toastmaster General of our community, The Bull Gator. The last of a generation of men who at great sacrifice gave significant parts of themselves to make this part of Florida better. He followed men like Big Bill and Billy France, Sax Lloyd, Lou Fuchs, Dick Moore, Jimmy Huger, Hal Marchman, Bill Crotty, Tom Staed and Jay Adams who gave so much more than they took. He was the last of the Old Guard.

Bert was predeceased by his parents and his sister Jane and his two late wives, Lois Reames, and Joanne Reames. He is survived by his devoted and loving wife, Julie, their son, Dr Roosevelt Harris, three nieces: Susie (Jay), Laurie, and Gayle (Ken), three nephews: Mike (Cam), Steve (Jane) and Joe. He never met a stranger and leaves a thousand friends who loved him dearly.

Bert Reames melded the contrasting qualities of a rollicking good ol' boy, filled with bawdy good cheer with deep sensitivity and profound compassion for all of his fellow humans, particularly those in trouble or need. We are each unique….and some are more unique than others despite that linguistic contradiction. Some are special and extraordinary and that was Bert Reames. The world will be a little less interesting without him. When people met Bert, they lit up. That light has been extinguished. There are other lights, but none with the brightness or longevity.

Two of his favorite lines were "be kind for everyone is fighting a hard battle" and "over tip your server". He would be smiling down if you remember this in his memory. And his favorite line to bartenders: "Pour me one like you would pour it for your daddy!"

A Celebration of Life will be held later. Should you wish to remember Bert please consider donating to Haliax Health Foundation, Inc., 303 N. Clyde Morris Boulevard, Daytona Beach, FL 32114 or a charity of your choice.


To plant trees in memory, please visit our Sympathy Store.
Published by Daytona Beach News-Journal from Feb. 18 to Feb. 21, 2021.
MEMORIAL EVENTS
No memorial events are currently scheduled.
To offer your sympathy during this difficult time, you can now have memorial trees planted in a National Forest in memory of your loved one.
Funeral services provided by:
Haigh-Black Funeral Home
MAKE A DONATION
Please consider a donation as requested by the family.
MEMORIES & CONDOLENCES
Sponsored by Daytona Beach News-Journal.
7 Entries
It was my privilege to have met Bert and been able to work with him for many years.

He was always knowledgeable, helpful, kind and friendly.

Julie, you and your family will be in our thoughts and prayers.

Bert was a one in a million kind of man and I was lucky to have known him.

Shawn and Valerie Gallagher
Shawn Gallagher
March 7, 2021
Sending our heartfelt condolences to Julie and Roosevelt. The world will miss such a kind, generous, warm and incredible person. May the wonderful memories of Bert continue on through those who were lucky enough to know him.
Joshua and Heidi Horenstein
February 23, 2021
I am so sad to hear of Bert’s passing. As an Life and Health Insurance agent of 47 years I was and am in awe of Bert and his accomplishments. He will always be spoken of with gratitude for having had the privilege of knowing him. Sending prayers for comfort and strength to his family and many friends and acquaintances.
Rest In Peace Bert and Go Gators !!

Randy Deveaux
NAIFA member 47 years
Randy Deveaux
Friend
February 20, 2021
Bert was a very special man who was a help to me with financial decisions after the death of my husband. He inspired me to continue my nursing school program when I became discouraged.Bert and Julie both helped me through a rough time in my life. Bert is a man you can’t ever forget. Also, all my love to Julie who is the best friend anyone would be blessed to have in their life.
Joyce Cannata
February 20, 2021
We were so sorry to read of Bert's death, but were fortunate to have been one of his friends. What a wonderful, productive life he had. Our thoughts and prayers go out to his family. Thanks for the memories, Bert!
Wes and Dianne Martin, Tampa, FL
Wes & Dianne Martin
Friend
February 20, 2021
My deepest condolences to Julie and Dr Roosevelt. I had the honor & opportunity to meet Bert while doing the Benefits Enrollments for Halifax Hospital. I always looked forward to the pre-enrollment party at Bert's and Julie's house and conversing with him.
May he rest in Peace!
Jose Echevarria
Friend
February 19, 2021 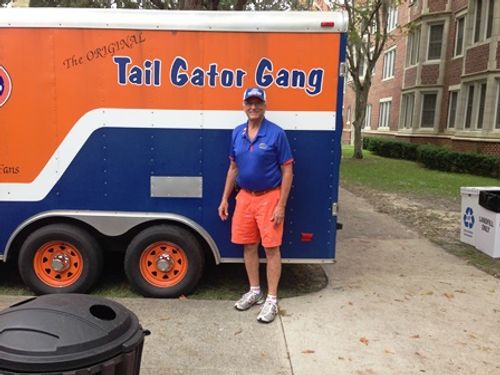 Gator Bert’s passing is a great sorrow to all of us. The obituary did not mention that Bert was a past President of the Gator Club here, and I could call on him at any time to support our scholarship fund, or participate in any of the Gator Club’s activities. Bert has many friends here and I am proud to have been one of them.
Jim Tobin
Friend
February 18, 2021