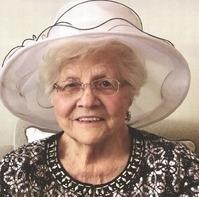 It is with great sadness that the family of Dolores E. Ulrich announces her passing on August 12, 2021.

She recently celebrated her 97th birthday. Born the second daughter to Albert and Margaret Balk on June 28, 1924, in Buffalo, New York, she had three sisters, each of whom preceded her in death: baby Elizabeth, Marie Boyle and Jean Anson.

A WWII wartime bride, she married the love of her life, U.S. Army Air Corp Staff Sergeant George Ulrich on November 11, 1944. He would board a

troop transport only weeks later, on Christmas Day, to return to the European theater. George came home in June 1945 to his bride and the beginning of loving 49-year marriage which would witness the birth and rearing of three sons. A devoted wife and Mother, Dolores was always quick to volunteer time and effort on behalf of her husband and "boys."

In 1998, following George's death some five years earlier, Dolores relocated to Aberdeen at Ormond Beach where she met many kind and generous people and made lasting friendships. While at Aberdeen, she volunteered at The Casements, joined the ladies Red Hat Society, was active with her local Catholic Church, and traveled extensively with dear friends.

in 2017. She was highly complementary of and grateful to the staff. In early July 2021 her health began to deteriorate rapidly, and she entered hospice care. She passed peacefully in the early evening of August 12th in the presence of family. The Last Rights of the Catholic Church were administered.

Dolores is survived by her three sons and their wives: Thomas and Susan (Port Orange, FL), Michael and Sallie (Daytona Beach, FL), John and

Dolores' ashes will be transported back to Buffalo, New York where they

will be interred next to her late husband. Arrangements are under the direction and care of Lohman Funeral Home Port Orange, 1201 Dunlawton


Published by Daytona Beach News-Journal from Aug. 17 to Aug. 22, 2021.
To plant trees in memory, please visit the Sympathy Store.
MEMORIAL EVENTS
To offer your sympathy during this difficult time, you can now have memorial trees planted in a National Forest in memory of your loved one.
Funeral services provided by:
Lohman Funeral Home - Palm Coast
MAKE A DONATION
MEMORIES & CONDOLENCES
Sponsored by Daytona Beach News-Journal.
0 Entries
Be the first to post a memory or condolences.