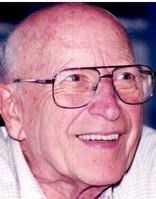 J. Roland Smith, 99, of New Smyrna Beach passed away August 15, 2021. He was born in Bartlett, New Hampshire on July 17, 1922. Roland was raised in New Hampshire and graduated from Conway High School. He went on to attend the Wentworth Institute in Boston. After graduation he began a career in the printing business in Falmouth, MA specializing in commercial and publication printing. He honorably served in the U.S. Navy from 1942-1945. He attended several schools state side while serving as a Pharmacists Mate 1st class. He also served at the Pearl Harbor Navy Yard, Seabees in Guam and in Rota. Upon landing on Rota he found the Japanese flag still flying over their command center. As he worded it he "liberated" the flag and the stars and stripes were put up. That Japanese flag along with a picture of Roland are on permanent display at the U.S. Navy Memorial in Washington, D.C. Roland moved to Florida in 1948 and continued his career in printing, both in Orlando and St. Petersburg. In 1951-1952, he was recalled by the Navy for the Korean conflict, serving as a Dental Tech 1st class and working on Special Independent Assignments and the Iceland Defense Force. At this time he worked in coordination with the O.S.S. which later became the C.I.A. In 1953, after his discharge, Roland began teaching printing in St. Petersburg. During that time he developed and published curriculum and authored several articles. From 1953 to 1966 he attended Florida State University where he obtained a degree in Vocational Administration and Curriculum. He became the Vocational Director at Daytona Beach Community College from 1966 to 1985. He developed and implemented programs for the college in the areas of the health industry and public service and served as president of United Child Care and Mental Health Association. From 1985 to 2000 he was an Education Consultant for Prison Industries of Florida and documented and arranged certification of the industries. He enjoyed extensive travel and photography of the U.S., Canada, Europe, and Mexico. In retirement he was active in the First Baptist Church Of N.S.B., Gideons, Friendship Force, Wings and Wheels Museum and participated in Honor Air 2012. He is predeceased by his wife of 30 years, Patricia Randolph Smith. Survivors include his sister, Grace Davis, Manchester, NH; daughter, Marilyn S. Ponds, New Port Richey, FL; stepchildren, Leslie Twigger, Deborah Kemp, and Charles Aldridge; grandchildren, Jeremy and Melodie Kemp and several great-grandchildren. Friends may call Friday August 27 from 12pm-1pm at the First Baptist Church Of New Smyrna Beach, 200 Faulkner Street. Funeral services will follow at 1pm. Interment with Military honors will be in Sea Pines Cemetery Edgewater. Donations may be made in his memory to Gideons International.