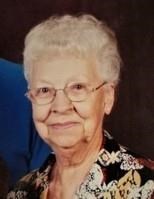 Shirley Norine M. Gooch Weesner 93, passed away July 30, 2021. Shirley was born April 2, 1928 to the late Fred Gooch and Rose Mason Gooch in Norwich, Norfolk, England. Her teenage years were spent running to bomb shelters during WWll and losing all her childhood friends in the neighborhood, she and her sister, being the only young girls to survive. Some of the family's food rations at the time consisted of 8oz of sugar, 1 egg per person, and 2oz of butter per week. But, in the midst of hardship, she met and fell in love with an American soldier, Max Weesner. When the war ended Max returned home and proceeded to secure a home and a job so he could send for her. That was when, in 1948, she left her homeland to join him in the United States. Residing in Chicago, IL.

Shirley was a stay at home mom but spent many hours volunteering at our local church. She was always being asked for her pineapple upside down cake at potlucks, but was best known for her amazing pies. She loved to knit and sew doll clothes for all the girls with Barbie's. Shirley was also very good at calligraphy. Not knowing how to drive, Max stepped up to teach her, much to the bemusement of the two wide eyed kids in the back seat. When Max retired, they moved the family to his childhood city of Daytona Beach. There she worked at the Reef hotel as desk clerk, the Hungarian Village as hostess, and Angel & Phelps Candies doing their window dressings for each location. Later after retirement, Shirley volunteered tirelessly with Volusia Council on Aging. Receiving numerous awards for her work and dedication. Shirley was kind, soft spoken, yet a fearless soul. Never a complaint was uttered.

She was predeceased by her parents, husband, Max Weesner, sister, Joyce Manning, infant son Stephen, and her son in laws, Sam Freeman and Ben Parran.

Shirley is survived by her son Michael Weesner, Port Orange, daughter Shirley Parran, Port Orange, and grandson Daniel Freeman (Caitlyn), Oak Hill, and many nieces and nephews who she adored.

Many thanks to Port Orange Nursing and Halifax Health Hospice.

Condolences may be shared online athttp://www.cardwellfuneral.com.


Published by Daytona Beach News-Journal from Aug. 13 to Aug. 22, 2021.
To plant trees in memory, please visit the Sympathy Store.
MEMORIAL EVENTS
To offer your sympathy during this difficult time, you can now have memorial trees planted in a National Forest in memory of your loved one.
Funeral services provided by:
Cardwell Baggett & Summers Funeral Home
MAKE A DONATION
MEMORIES & CONDOLENCES
Sponsored by Daytona Beach News-Journal.
0 Entries
Be the first to post a memory or condolences.