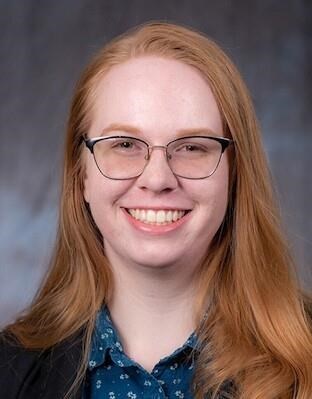 Aviva Okeson-Haberman would be uncomfortable with the amount of attention she's getting right now. Never one to brag or boast, Aviva's multitude of accomplishments and professional honors nonetheless speak for themselves. Throughout her tragically short life and career, Aviva's talents and personality shone in the stories she shared, colleagues she inspired, and family and friends she loved more than anything. Those who had the good fortune to know her well were enriched by the warmth and help of a caring and compassionate friend. Aviva died in Kansas City, Missouri, on April 23, 2021. Known for her thoughtful, aggressive, and compassionate reporting, at only 24 years old Aviva had already begun an illustrious career as an investigative journalist. This was no accident. She was a long-time enthusiast of National Public Radio, and as early as middle school, Aviva aspired to work in the media. And when something was important to Aviva, she put her heart and soul into making it happen.

Her most daunting challenges came early in life. After her biological parents divorced, at the age of 14, Aviva and her two younger sisters moved to Springfield, Missouri. It was her family's third move across the United States since Aviva's birth. Three years after moving to Springfield, Aviva and her sisters were placed into the foster care system with her maternal grandparents.

Aviva went on to graduate from the Missouri School of Journalism at the University of Missouri in 2019. In her time as a Mizzou student, her professors and classmates alike were witness to Aviva's caring nature and dogged work ethic. Others noticed, too. Her investigation of Missouri's elder abuse hotline prompted an investigation by the Attorney General and brought about state-wide public policy changes to correct deficiencies that resulted in more than half of all calls going unanswered. For this work, she received the Sigma Delta Chi Award for Investigative Reporting, an honor typically reserved for veteran journalists.

A highlight of her college career was when two of her stories ran on Here & Now, a nationally-distributed radio program at NPR.

After graduating, Aviva was hired as the Missouri Politics and Government Reporter for KCUR. She impressed the newsroom with her work ethic, diligence, conscientiousness and eagerness to learn. Her kind and gracious demeanor gave little hint of the strength of purpose that made her such a skilled and tough reporter.

Throughout it all, Aviva always set aside her own needs for those of her sisters. The ferocity with which she loved them was her defining characteristic, her reliability, calm consistency, resilience and unending dedication being far beyond her years. For her sisters, she rose above every expectation, assuming the roles of tutor, caregiver, protector, and advocate without complaint or hesitation. In spite of their shared hardships, it was her love for her sisters and strength of character that allowed them to flourish.

Aviva is survived by her biological parents, Sarah and Brian; her maternal grandparents, Carol and Jerry; her sisters, Alexandra and Zelda; and her cat, Francine.

Private funeral arrangements are being made, with a forthcoming announcement of a memorial for friends and colleagues.

Those who wish to honor Aviva Okeson-Haberman's life may send a contribution to The Coalition to Stop Gun Violence or The Aviva Okeson-Haberman Fund, which will continue Aviva's goal of ensuring the well-being of her two sisters. Donations to this fund may be sent by mail c/o Elizabeth Weiner at 5839 S Kimbrough Ave., Springfield, MO, 65810


Published by News-Leader from Apr. 28 to Apr. 30, 2021.
To plant trees in memory, please visit the Sympathy Store.
MEMORIAL EVENTS
To offer your sympathy during this difficult time, you can now have memorial trees planted in a National Forest in memory of your loved one.
MAKE A DONATION
MEMORIES & CONDOLENCES
Sponsored by The Springfield News-Leader.
2 Entries
Aviva was a light in this dark world. She will be greatly missed!
Mrs. Heidi J. Hardy
Acquaintance
May 3, 2021
My heart breaks for Aviva as well to all the brave journalists around the world who have been silenced.
I never had the chance to meet you but was touched after reading about you from far away.
Thanks Aviva, your light will be shining forever
Sara Bernal
Sara Bernal Seywerth
Friend
May 1, 2021
Showing 1 - 2 of 2 results