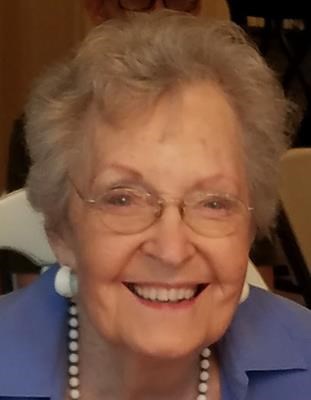 Lorraine was born July 23, 1927, in Nashua, IA, to Howard and Amy Miller. She graduated from Mountain Grove High School in 1945 and attended Draughon's Business College in Springfield, MO. In 1950, she married Willard L. Bowman. After the sudden passing of her beloved husband in 1965, Lorraine found in herself a quiet strength that impelled her to raise their four children while working full-time for Springfield Public Schools, where she served in administrative positions for twenty-six years.

That same vitality allowed her to live independently her whole life—and in her own home until just two years before her death. And even as her health declined in her final weeks, she never lost her playful sense of humor.

Lorraine had a lifelong love of music. She sang in the choir at St. Paul United Methodist Church, where she was a longtime member. She also sang with the Sweet Adelines (Ozark Chapter) for some years. But her greatest blessing in life was her children, grandchildren, and great-grandchildren—she loved sharing their stories with anyone around her.

She is survived by four children: Mark Bowman (Cathy) of Kerrville, TX, and Janet Shryer, Julie Shultz (Thomas), and Douglas Bowman (Lori), all of Springfield, MO. Survivors also include a brother, Kenneth Miller (Neena), of Anchorage, AK; a brother-in-law, Richard Bowman, Nixa, MO; a sister-in-law, Lucy Miller; eleven grandchildren and thirteen great-grandchildren; and many nieces and nephews. She was preceded in death by two brothers, Arthur Miller and Clark Miller; her sister, Marjorie Witty; and her great-grandson, Sam Blew.

A memorial service will be held at Greenlawn Funeral Home East, Springfield, MO, Friday, March 9th at 11:00 AM, followed by burial at White Chapel Memorial Gardens.