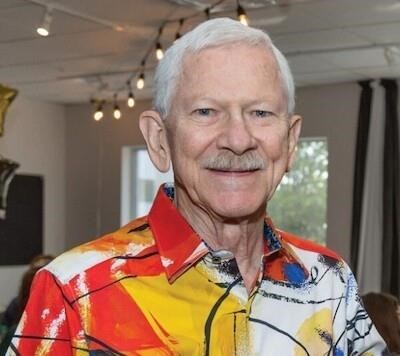 Fort Myers - My beloved husband, Ronald Glenn Wallace, 76, a resident of Fort Myers, FL, passed away at home on June 24, 2020. Born in 1943 in Puyallup, WA, Ron grew up in Richland, WA, a town built on the Columbia River by the US government to house the scientists, engineers, and support personnel for the Hanford plutonium enrichment site's role in the Manhattan Project's atomic bomb production.

In Richland, Ron attended Marcus Whitman K-6, Chief Joseph Junior High, and Columbia High School, whose sports teams were called the Bombers. Committed to scouting, Ron rose to the Order of the Arrow, adopting the name of Kum Tux Pike Tilicum. Surrounded by the scientists and engineers from Hanford, Ron's interest in all things electronic began very early, both in ham radio and in building all manner of electronic gizmos, something he continued doing throughout his life. Ron told wonderful stories of his father's support for his projects and of the disruptive efforts to participate by his two younger brothers.

Ron got his B.S.E.E. and M.S.E.E. at the University of Washington, with his undergraduate studies funded by a gymnastics scholarship (he was a successful competitive trampolinist) and Air Force ROTC, the latter of which also funded his graduate work. Serving for four years in the Viet Nam era's Air Force Electronic Systems Command, Ron designed, installed, and troubleshooted satellite communications networks, often TDY from his base at Hanscome Field, near Boston, MA, and he was Captain Wallace when honorably discharged.

It was while serving in the Air Force that Ron met his future wife, Naomi Bloom, then completing her MBA at Boston University. With his discharge in hand and Naomi's new degree, Ron and Naomi were married in Boston before spending their honeymoon tent camping across the US, with myriad stops along the way to visit first Naomi's East Coast and then Ron's West Coast family and friends. Their shared love of travel, as well as visits with far flung family and friends, was a passion in which they indulged throughout their married life.

Ron and Naomi settled in what's now called Silicon Valley (but was then still mostly fruit orchards) for a few years before they headed to the Washington, DC area in 1977. Having developed an interest in American Indian pottery, weaving, and kachina during their honeymoon's foray into the southwest, they spent much of their limited vacation time while living in California in and around historical Indian lands, collecting as they went.

Settling in Fairfax, VA, Ron began his full-time work for ORI, often under contract to NASA, and his part-time PhD studies in satellite communications theory at George Washington University from which he earned his Engineer Degree, a non-thesis alternative to the PhD. By then Ron had joined NASA, where he became the mission manager for terrestrial search and rescue as well as an American delegate to COSPAS/SARSAT. This international program for terrestrial search and rescue relied on satellite signal processing to locate vessels lost at sea, downed planes, and lost back country travelers.

While based in Northern VA, Ron and Naomi expanded greatly their travels, with both of them traveling for business and pleasure at every opportunity. They also took up sailing on the Chesapeake Bay, starting with their Catalina 27, "La Princesa," and then moving up to a Caliber '40, "Mar-Lin Nights." Gunkholing on the Chesapeake, taking full advantages of DC's cultural riches, and seeing as much of the world as possible while working very long hours, Ron and Naomi packed two years of living into every calendar year while still spending as much time as possible with a growing circle of friends, family, colleagues, fellow boaters and travelers.

Ron and Naomi moved to Fort Myers, FL in 1999 for Naomi's health, designing and building their dream home, "Casa de Ranas." Ron took early retirement from NASA to make the move possible, and he then took charge of home, boat, and so much more while Naomi continued her career in enterprise software. Getting involved with the Sanibel-Captiva Power Squadron, to include teaching both marine electronics and communications, and driving cancer patients to their treatments for the "Road to Recovery" program were just two of the many ways in which Ron put down roots in and contributed to his adopted hometown. When handling a blue water sailboat became too much for Naomi, they had built and commissioned in 2010 an American Tug '34, "SmartyPants," so that they could continue much loved evenings at anchor.

Together with his wife, and often accompanied by family and friends, Ron traveled the world, from Uluru in Australia, Petra in Jordan, and Machu Pichu in Peru, to the great capital cities of Europe and South America. He enjoyed weeks of London theater and museums and all the other cultural riches of major cities, but he also enjoyed taking the road less traveled, going right off the map to see what those dotted line roads might offer. In terms of philanthropy, Ron and Naomi put their money where their hearts were, supporting the arts, education, public TV/radio, investigative journalism, and much more.

When cancer struck in 2005, Ron beat it and was able to enjoy a long period of great health and full remission. When a different, very aggressive and treatment-resistant cancer struck in 2018, Ron tackled it with his trademark optimism, taking each failed treatment with equanimity and moving on to the next. We are very grateful to Dr. William Harwin for all he did to help Ron and Naomi in their second cancer battle, and to Flora Gadson and Laszlo Hegedus for taking such good care of us and of our home.

In Fort Myers, Ron was a passionate supporter of the Florida Repertory Theatre https://www.floridarep.org/ To help other young gymnasts at the University of Washington, Ron supported the non-profit Washington Men's Gymnastic Foundation http://wmgf.us/ Donations to either of these organizations in Ron's memory would be a great kindness. When it's safe to travel and gather, celebrations of Ron's life will be held in Fort Myers and in his beloved Pacific Northwest where the Wallace clan is concentrated.

Friends are invited to send condolences via the on-line guest book which can be found at www.MullinsMemorial.com. https://mullinsmemorial.com/obituaries/ronald-glenn-wallace/

To plant trees in memory, please visit our Sympathy Store.
Published by The News-Press from Jul. 14 to Jul. 15, 2020.
MEMORIAL EVENTS
No memorial events are currently scheduled.
To offer your sympathy during this difficult time, you can now have memorial trees planted in a National Forest in memory of your loved one.
Funeral services provided by:
Mullins Memorial Funeral Home & Cremation Service, Inc.
MAKE A DONATION
MEMORIES & CONDOLENCES
Sponsored by Mullins Memorial Funeral Home & Cremation Service, Inc..
0 Entries
Be the first to post a memory or condolences.