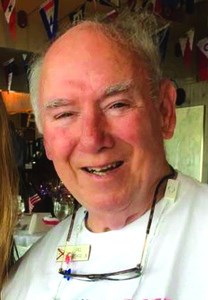 Paul was born October 15, 1945, in Boothbay Harbor, Maine, the son of Paul Whitehead and Elizabeth Perkins Whitehead. He was the grandson of Stuart Baldwin Whitehead and Susan Withers Massie Whitehead of Lovingston, Virginia, and James Blenn Perkins and Fannie Souther Orne Perkins of Boothbay Harbor.

Paul was a 1963 graduate of E.C. Glass High School and 1967 graduate of VPI (Virginia Tech) with a degree in Business Administration. While in Blacksburg, he served in the Corps of Cadets for two years and was a member of Tau Delta Fraternity and the Cotillion Club. In 1970, Paul graduated from the University of Virginia School of Law and joined his father as a trial attorney. After service in the ROTC program at UVa, he became an officer in the United States Army Reserves and retired as a Captain in 1978. He was admitted to the bars of Virginia, the U.S. Court of Appeals, and the U.S. Supreme Court. He practiced with his father in their law offices in Lynchburg and Lovingston until 1985 when he became a General District Court Judge for the 24th District including Lynchburg and Amherst, Bedford, Campbell and Nelson counties.

Paul met his wife Sandra Kaye Stone at E.C. Glass. The high school sweethearts dated throughout college and wed in Lynchburg in December 1967. They were married just shy of 50 years, until Sandra's death in April 2017. She was the love of his life.

An active volunteer in the community, Paul was a member St. John's Episcopal Church where he was the youngest senior warden in the history of the Parish at age 28. For 50 years, Paul was a member of Rotary Club of Lynchburg and in 2000 served as president and became a Paul Harris Fellow. In addition, he served on the boards of Westminster-Canterbury of Lynchburg, the Red Cross of Central Virginia, and Spring Hill Cemetery.

Boothbay Harbor was a large part of Paul's life. He was very proud to be a native Mainer and cherished his time there, spending Summers for 74 years until his illness made it impossible to travel. Paul was an active member of All Saints-By-The-Sea Episcopal Church on Southport and the Boothbay Harbor Rotary Club. Paul enjoyed outings on the family boat Sandra Kaye and socializing with his many tennis and bridge friends at the Boothbay Harbor Yacht Club. He was also a member of the Down East Yacht Club, the Harbor Duplicate Bridge Club, and Juniper Point VIS tennis.

Sandra and Paul were devoted art collectors and patrons of the Maier Museum of Art at Randolph College. They also enjoyed playing duplicate bridge together (earning over 300 Life Master points but not quite enough elusive gold points) and traveling the world. Paul was great tennis player, a lifelong democrat, and passionate fan of his beloved Hokies, Cavaliers, and New York Yankees. Most of all, he was a generous and loving husband, father, and friend.

There will be a visitation at the Maier Museum of Art at Randolph College in Lynchburg on Wednesday December 1, 2021, from 6 to 8 pm. A memorial service will be held at St. John's Episcopal Church of Lynchburg on Thursday, December 2, 2021, at 11 a.m., with a reception following at the church. A graveside service at Trinity Episcopal Church in Nelson County will be private.

In lieu of flowers, the family respectfully requests that you consider a donation to your local Rotary Club or a charity of your choice.

Published by Nelson County Times on Nov. 28, 2021.
To plant trees in memory, please visit the Sympathy Store.
MEMORIAL EVENTS
To offer your sympathy during this difficult time, you can now have memorial trees planted in a National Forest in memory of your loved one.
Funeral services provided by:
Diuguid Funeral Service & Crematory - Wiggington Road Chapel - Lynchburg
MAKE A DONATION
Please consider a donation as requested by the family.
MEMORIES & CONDOLENCES
Sponsored by Diuguid Funeral Service & Crematory - Wiggington Road Chapel - Lynchburg.
4 Entries
Used to court bailiff under Judge Whitehead. He was always very polite and easy to work under. Condolences to the family.
Fred Loving
Work
December 2, 2021
Jill, I loved your father. We had many good tennis times at JPVIS and BHYC. He was so distinguished and kind. We saw one of our favorite sunsets from their cottage. I am very sorry for your loss. You can take pride in that you were a very caring daughter. With sympathy, Judith and Joe Metz
Judith Metz
November 30, 2021
Pail was a dear friend we were adear friend he will be missed deeply love you as we called him pj
Alverta Haskins
Friend
November 29, 2021
so sorry for your loss! I will always cherish the time i had with him / taking care of him.
Sidney DeWitte
Other
November 28, 2021
Showing 1 - 4 of 4 results