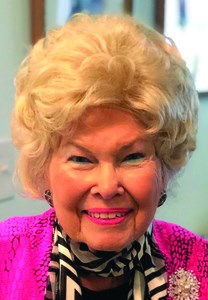 Ernestine Ann Woodle Dodl, born on March 23, 1928, the daughter of the late Alice Whitlock and Willis A. Woodle, died at the Cedarfield Retirement Community in Richmond, Va., on July 17, 2021.

Ernestine married in Lynchburg, Virginia, in 1951, the love of her life, the late Rudolph Conrad Dodl Jr. of Cumberland, Va., a Hampden Sydney Club and Hokie guy in Civil Engineering retiring from Wiley and Wilson Engineering firm. They enjoyed a wonderful life with many happy memories through their two sons, family, and dear friends; a beautiful Smith Mountain Lake Retreat; travel in the U.S. and Europe, especially genealogy related trips to England for Ernestine and Germany for Conrad.

She was predeceased by her husband, Rudolph Conrad Dodl Jr., and one of her two sons, Rudolph Conrad Dodl III who passed at the age of 30 after a 12-year courageous battle with Hodgkins Disease. Rudy was a graduate of VPI and a fabulous artist. Ernestine is survived by a son, William A. Dodl; granddaughter, Carmen Dodl; her sister, Elizabeth M. Burford, as well as several nieces and nephews.

Ernestine was born in Richmond, Va. in the Church Hill area. She was a graduate of E.C. Glass Highschool, a member of the National Honor Society and a graduate of Virginia Commercial College in Richmond. She held administrative assistant positions at the law firm of Perrow & Rosenberger (including State Senator Mosby Perrow), and substitute secretary and library assistant at public schools in Lynchburg. In later years she worked as the assistant to Lynchburg College's Dean of Nursing and retired from Randolph College as administrative assistant to the Director of Development. Ernestine could type 130 words per minute!

One of Ernestine's many interests was tailoring clothes for herself, family, and friends. She was recognized for these skills in the local Lynchburg paper. She was a member of the Inglewood Garden Club bringing home many blue ribbons, the Poplar Forest and Commonwealth Chapters of the Daughters of the American Revolution, and the Lynchburg Woman's Club.

Ernestine was an active member of Centenary Methodist Church in Lynchburg, Va. for 60 plus years and was greatly influenced by the fellowship worship and music through the years. She also attended the Trinity Methodist Church of Richmond Va. In her later years.

Those who knew Ernestine will remember that she always dressed to the nines, her outfits matching the shoes and earrings, necklaces, etc. Ernestine also was known for her positive spirit, rarely complaining about anything, living in the moment, and a charming southern drawl and laugh. She easily and joyfully engaged with a room full of people whether she knew them or not.

A small graveside service will be held on Saturday, July 24, 2021, at 11 a.m. at the Virginia Memorial Park, 11490 Forest Road, Forest, VA 24551. Memorials may be made to Centenary United Methodist Church, 1501 Rivermont Avenue, Lynchburg, VA 24503. In lieu of flowers please make donations to your preferred cancer charity.

220 Breezewood Drive, Lynchburg, VA 24502
Published by The News & Advance on Jul. 21, 2021.
To plant trees in memory, please visit the Sympathy Store.
MEMORIAL EVENTS
Jul
24
Graveside service
11:00a.m.
Virginia Memorial Park
11490 Forest Road, Forest, VA
Funeral services provided by:
Tharp Funeral Home
MAKE A DONATION
MEMORIES & CONDOLENCES
Sponsored by Tharp Funeral Home.
6 Entries
So sorry for your loss. I will miss seeing Ernestine "dressed to the nines." She and my mother, Dorothy, were cousins and friends and although they did not see each other often in their later years, they remained close. Ernestine and I had a common interest in the genealogy of our families and she provided me with very good information as well as encouragement in my search for family history. I am happy to have known and spent time with such a lovely lady.
Cecile Reynolds Myers
Family
July 26, 2021
Billy & Family, We loved Ernestine & her sense of style, warmth & easy smile! She was an incredible Nursing Department Administrative Assistant, too! She could climb three flights of stairs in Hopwood Hall, wearing her 3-inch spikes and never miss a step. She always greeted students, faculty & visitors with such genuine warmth. Centenary members never forgot her stylish hats & missed them, after her move to Richmond. Our deepest sympathy... Love, Dawn & Barry Arrington
Dawn & Barry Arrington
July 22, 2021
The Commonwealth Chapter of the DAR sends condolences for the loss of Mrs. Dodl. She was a cherished member of the Commonwealth chapter and will be missed.
Commonwealth Chapter DAR
Other
July 22, 2021
I send my sympathies to her family. I met Ernestine through her husband, Conrad, when I worked at Wiley & Wilson, 1969-1975. Both were lovely people, and it was a treat working with Conrad all those years ago. May both of their memories be a blessing to their families.
Kathryn Johnson-Drury
Work
July 22, 2021
Sad to hear of Mrs Dodl's passing. She was a truly gracious and lovely person inside and out. A great friend to my mom and dad. I have many childhood memories of her and Mr Dodl. They are both traveling with my parents and the Lord now. Prayers for Billy and family.
Liz Unger Underhill
July 21, 2021
Ernestine exemplified love and acceptance. She would light up a room. I shall never forget how attentive she was to my mother. They shared a special bond. A life well lived!
Jo Ann Ware
Family
July 21, 2021
Showing 1 - 6 of 6 results