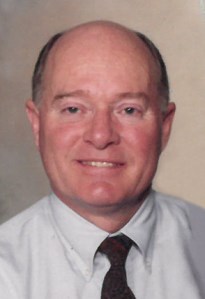 John William "Bill" Howell was born in Bedford, on July 25, 1942, to the late Hessie Vivian Payne and Jeter Carl Howell; and grandparents, the late Johnnie and Elberry Mitchell Payne and William Bailey and Lura Plymall Howell.

Bill grew up in Huddleston on his parent's dairy farm. He graduated from Huddleston High School in 1960. He attended Ferrum College and received his BA from BYU and his MBA from University of Lynchburg.

John worked his entire career as a Computer Systems Analyst, beginning in 1966 with McDonald Douglas in St. Louis, Mo. retiring from Grief in 2008.

John was a member of The Church of Jesus Christ of Latter-day Saints. John held many administrative positions in the church through the years. He and Evelyn served a twelve-month (2010-2011) mission in Missouri at the Independence Visitors Center and the Historic Liberty Jail. He enjoyed traveling and especially researching his family history and dancing at New London and Glenwood with his wife.

A celebration of John's life will be held at 2 p.m. on Saturday, January 16, 2021, at The Church of Jesus Christ Latter-day Saints with Bishop Rudy Wolf presiding.

To plant trees in memory, please visit our Sympathy Store.
Published by The News & Advance on Jan. 15, 2021.
MEMORIAL EVENTS
Jan
16
Celebration of Life
2:00p.m.
The Church of Jesus Christ Latter-day Saints
Funeral services provided by:
Tharp Funeral Home
GUEST BOOK
5 Entries
Dear Evelyn, So sorry i just heard of John´s passing yesterday. Please let me know if you need me or the assistance of Chapter 16. We love your support and look forward to seeing you in the future
Judy Toler
January 23, 2021
Evelyn sorry for your loss we will be praying for you an d your family
Frank Smith
Friend
January 16, 2021
Evelyn so sorry to hear about John. I know he will be missed. Praying for you and family.
Patty Pollard
January 15, 2021
Dear Evelynn and family we are sad and shocked reading this message and sending our condoleances and praying that you will experience Gods comfort
TEUS AND NEL BOUTESTEIJN
January 15, 2021
Enjoyed working with John at Greif. So sorry for your loss.
Dick and Connie Ward
January 15, 2021