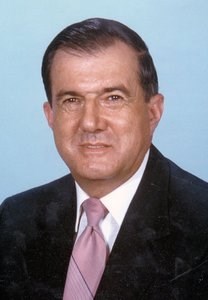 Robert Lanter Jr. was born on July 6, 1930 in the Green Valley area of Grayson County Virginia just outside of Fries, Virginia to the late George Robert Lanter and Nellie Boyles Lanter.

He married Juanita Anders on January 13, 1945. She was his loyal and faithful wife as they moved to different churches in The Church of God of Prophecy denomination. The delight of their life was when their only daughter Phylis Ann was born August 1948. Robert was educated at Stevens Creek Elementary School, Fries High School and Tomlinson Bible College. He gave his life to Christ in 1954 at Pine Mountain Pentecostal Holiness Church. A year later he joined the Fries Church of God of Prophecy Church where he felt the call to become a minister. In 1959 he was ordained as a Deacon by M.A. Tomlinson, General Overseer of the COGOP. He became a full-time pastor in January 1960. He has pastored churches in Grubb's Chapel, Ivanhoe, Buena Vista, Glade Springs, Collinsville, Altavista, Popular Camp, Java, and Galax Virginia. While pastoring in Altavista, he was ordained a Bishop.

For 18 years, the Rev. Lanter was a member of Rescue Squads in different cities where he pastored churches. He became an EMT while serving the Altavista Rescue Squad. He loved helping people that were hurting whether it be physically or spiritually. He was always available to help anyone in need. He semi-retired in 2012 in Hurt Virginia. Until his death, he filled He will be missed by his family, his church and his many friends.

Funeral services will be conducted at 11 a.m. on Sunday, November 22, 2020 at Church of God of Prophecy Altavista by the Rev. Whit Mayton, Bishop Wayne Murphy, and Bishop Jerry Schall. Burial will be held at 1 p.m. on Monday, November 23, 2020 at Felts Memorial Cemetery in Galax.

The family suggests memorial contributions be made to Church of God of Prophecy Altavista, P.O. Box 278, Altavista, VA 24517.

Colbert-Moran Funeral Home, Gretna is assisting the family. Condolences may be sent to the family by visiting www.colbertmoran.com.

To plant trees in memory, please visit our Sympathy Store.
Published by The News & Advance on Nov. 21, 2020.
MEMORIAL EVENTS
Nov
22
Funeral service
11:00a.m.
Church of God of Prophecy Altavista
, Altavista, Virginia
Nov
23
Burial
1:00p.m.
Felts Memorial Cemetery
, Galax, Virginia
Funeral services provided by:
Colbert-Moran Funeral Home, Inc. - Gretna
GUEST BOOK
11 Entries
Deepest Sympathy from the Poplar Camp Church of God of Prophecy
Darlene Jones
November 25, 2020
My rememberance of a wonderful kind man. Always the same in kindness. He has received the words of the LORD "WELL DONE" His ministry was an asset to the many people he ministered to as a faithful pastor. GOD bless those left to Cherish his memory.
Mary Rash
November 22, 2020
Bishop Lanter, will truly be missed at COGOP in Altavista. He was a dear child of GOD.
Sarah Moore
Friend
November 22, 2020
This amazing man of God blessed not only those in his ministry settings, but to those outside of them. He was a special part of our family’s lives for 50 + years. My grandpa Dr Reverend Lenard Atkins and he we’re best friends for a long time. We are praying for our friends and the family!
Joshua 1:9 (NIV)
“9 Have I not commanded you? Be strong and courageous. Do not be afraid; do not be discouraged, for the Lord your God will be with you wherever you go.”
Angela & Samantha Todd
Friend
November 22, 2020
Sympathy to the family. You are in our prayers. Bro. Lanter was such a wonderful and godly man. He will be missed.
Kenneth and Glenda Ogden
Friend
November 21, 2020
Pastor Lanter was a sweet, humble, compassionate and gentle man. I always enjoyed our conversations at the Hair Show. No doubt he is happy, reunited with his beloved wife and present with his Lord!
To know him was to love him!
Debbie Crews
November 21, 2020
May God grant Comfort and Peace.
Evangelist Mark Kearns
Friend
November 21, 2020
preacher was a great friwnd to my father, Jimmy brewer, for many many years. He will be missed!
melinda s brewer monk
November 21, 2020
So sorry to hear about Rev. Lanter. He was such a kind, gentle man. Sending prayers of peace and comfort to his family.
Ruth Hall
Friend
November 20, 2020
Robert has been a special friend of our family for 50 years!!! I’m sure he’s happy to be with Jesus, Juanita, Dad & Mother!! We will miss him!!!
Mark & Imelda Lampley
Friend
November 20, 2020
May He Rest in Peace
dorothy mitchell
Friend
November 20, 2020