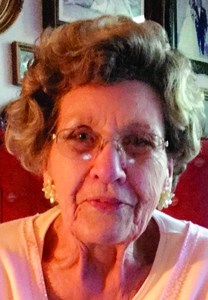 Ruby Burton Jennings, 93, of Gladys, passed away on Thursday, April 29, 2021, at Centra Lynchburg General Hospital. She was the wife of the late William Gerald Jennings Sr.

Ruby was born in Halifax County, on March 30, 1928, a daughter of the late Robert Lee Burton and Mary Gold Rudder Burton. She was a life-long member of Ebenezer Baptist Church, where she served as a choir member, Sunday school teacher, pianist, and was a member of the Hazel Moon Circle. Ruby owned and operated Burton-Jennings Florist and Gifts for 55 years. She was also a member of numerous organizations; past president of Brookneal Woman's Club, former vice regent for the Red Hill Chapter of the DAR, Brookneal Lions Club, receiving the 2009 Citizen of the Year award, American Legion Ladies Auxiliary, past member of the Brookneal Rebekah Lodge, past secretary for the Brookneal Chamber of Commerce, and was the Grand Marshall in the 2003 Brookneal Christmas parade.

A funeral service will be conducted at 1 p.m. on Tuesday, May 4, 2021, at Ebenezer Baptist Church by the Rev. Jamie Adams and the Rev. Johnny Roberts. Interment will follow in the church cemetery. The family will receive friends at her home other times.

Following the CDC guidelines for COVID 19 those attending the service will be required to wear a mask.

Condolences may be sent by visiting www.hendersonfuneral.net.

To plant trees in memory, please visit our Sympathy Store.
Published by The News & Advance on May 2, 2021.
MEMORIAL EVENTS
May
4
Funeral service
1:00p.m.
Ebenezer Baptist Church
Funeral services provided by:
Henderson Funeral Home
MEMORIES & CONDOLENCES
Sponsored by Henderson Funeral Home and Cremation Service.
5 Entries
Ruby was one of the kindest people I have ever met. Always a smile and never forgot to ask how you are doing or how your family is. She will be missed. Prayers for the family, RIP dear Ruby
Paul & Jackie Anctil
May 4, 2021
Our thoughts and prayers are with you all. Ruby was a wonderful and kind lady. You have our deepest sympathy, she will be missed.
A. J. and Andrea Neighbors
May 4, 2021
I´m so sorry to hear about sweet Ruby. I will miss visiting her at the shop and hearing her call me doodlebug. She was a woman of character, strength & grace. Praying for you all.
Tracey Wallace
May 3, 2021
Jerry & Anther So sorry to hear about Ruby's passing. God bless and prayers for the family.
Wayne Burton
May 3, 2021
I wanted to share my condolences to all the family and to let you all know that it was always a great pleasure in knowing her in my lifetime. She,as you all know, was the exceptional nicest lady anyone could ever be and she has gone to be with her savior now. I know that she will definitely be rewarded with her earnings. God bless.
Kevin Shorter
May 2, 2021