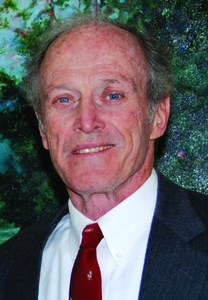 Born in Roanoke, Virginia, on September 5, 1931, Stuart was the eldest of two sons of the late Stuart "Monty" Horsley Harris and Annie Frank Preston Harris. Stuart and his brother Billy grew up on Pershing Avenue in Lynchburg, and as a young boy Stuart loved playing soldiers with friends in the neighborhood where they staged epic battles. He attended Garland Rhodes School, E.C. Glass High School and graduated in 1949 from Virginia Episcopal School, where he was an honor student and center on the football team.

In 1953, he graduated from the University of Virginia and was elected Phi Beta Kappa. While at UVA, Stuart excelled in athletics and academics. Stuart was an excellent wrestler for UVA and was proud of his accomplishments, such as a second place in the Virginia state championship for his weight class. An All-State center on the football team, he received the Keller-George Award as the outstanding offensive lineman, the 1952 Cavalier Daily Award for The Most Valuable Football Player and the Outstanding Student Athlete Award for 1952-53. He was a member of Sigma Alpha Epsilon fraternity, the IMP Society, the Raven Society, and the Z Society. He also served on the student council his senior year. Following in the footsteps of his beloved grandfather, Dr. John William Preston, Stuart sought to become a doctor. He often said that he so admired and respected his grandfather that if Dr. Preston had been a bank robber, he would have become one, too. In 1957, Stuart received a medical degree from UVA, where he was a member of the Alpha Omega Alpha honorary medical society. As remembered by lifelong friend Dr. Warren Koontz, "Stuart had a unique ability to focus on whatever task was at hand. It did not matter if it was a football practice, a game, or an upcoming test or exam. His ability to concentrate and focus was one of the keys to his success athletically, academically and in his long career as a surgeon."

One week after receiving his medical degree he married the love of his life, Marie Woody of Danville, Virginia. They moved to Boston as Stuart began his surgical training under the renowned Dr. Frances Moore at Peter Bent Brigham Hospital and Children's Hospital (now Brigham and Women's Hospital) and Marie taught school. Stuart put his English major to good use when he adapted The Wizard of Oz into a play for Marie's young elementary school students to perform. Stuart worked as a surgeon in the U.S. Army Medical Corps, stationed in Munich, Germany from 1958-1960. Marie and Stuart loved their time in Germany and loved returning to some of their favorite haunts in Europe on later trips. They returned to Boston after his military service to further his surgical training in surgery and orthopedics. Dr. Moore encouraged Stuart to stay in Boston to practice but Stuart had decided to return to Lynchburg. Moore asked him why he wanted to go back to the sticks and Stuart replied, "Because I'm from the sticks!"

His love for the University of Virginia was fulfilled when he returned to Charlottesville to complete his training in general, thoracic and vascular surgery. He and Marie moved to Lynchburg in 1965 where he and his partners founded Seven Hills Surgical Associates. He practiced general, vascular and thoracic surgery with deep devotion to the care of his patients for 39 years. During his long and distinguished career, Stuart was active in many medical organizations, serving on the board of the Lynchburg Academy of Medicine and as President of the Virginia Surgical Society. He was a Fellow of the American College of Surgeons, the Southeastern Surgical Congress, the Southern Thoracic Society, and the Society of Thoracic Surgeons. Chairman of the Credentials Committee of the American College of Surgeons for the state of Virginia for 10 years, he also served on the Board of Trustees of the Virginia Baptist Hospital and the Board of the Virginia Episcopal School. In 1969, he spent two months as a volunteer surgeon on the hospital ship U.S. HOPE in Tunis, Tunisia. Always the athlete, Stuart continued to enjoy squash, tennis, and golf - so much so that he and his medical partners built a squash court in the basement of their office building. Marie and Stuart were members of First Presbyterian Church where Stuart was both a deacon and an elder.

Stuart loved spending time with his family (whom he referred to as his "team") and his many friends. He never missed a UVA football game to gather with former teammates unless a patient needed care. Trips to Disney World were a highlight. He never tired of riding through the Haunted House with daughter Hope or braving Space Mountain with son Monty. Stuart loved tropical fish. After an intense day of work or night on call, he relaxed by watching the fish swim in their tank in the den. Stuart shared his passion for undersea life with his family on the many scuba vacations they took and on visits to Brown's Pet Shop, where his son Monty held snakes while Stuart picked out angelfish for his tank. Stuart and Marie were founding members of "The Anniversary Eight," four couples who married the same year. They vacationed as a group exploring destinations in Europe, Alaska, and the Caribbean to name a few. He delighted in his grandchildren who brought great joy to his later years.

He and his family wish to express deep gratitude to his beloved caretaker and former scrub nurse Sheila Waller and to the caring, committed staff at Westminster Canterbury.

In lieu of flowers, please consider a donation to the charity of your choice.

A memorial service will take place post pandemic.
To plant trees in memory, please visit our Sympathy Store.
Published by The News & Advance on Feb. 21, 2021.
MEMORIAL EVENTS
No memorial events are currently scheduled.
To offer your sympathy during this difficult time, you can now have memorial trees planted in a National Forest in memory of your loved one.
GUEST BOOK
14 Entries
I am so sorry to hear about the loss of Dr. Harris. An extraordinary man and surgeon. I am honored to have known him and an assisted him with many patients over the years when he was on call for ER patients. My deepest condolences for his family, friends and colleagues.
Robin Clark Guthrie
February 23, 2021
Thoughts and prayers are with you during this difficult time! I have fond memories of Dr Harris. I remember the first time I saw him was at the old Memorial Hospital on Grace Street, which was back in the late sixties! He was so kind to his patients and listen to them without being hurried! He was a wonderful physician! May God bless you all!
Dianne Pillow
February 22, 2021
It is with great sadness we say good bye to a wonderful Lynchburg surgeon. I shall never forget a quote he shared with me: " It is easier to give bad news to a farmer than to an engineer because the farmer knows who is in charge." May God bring comfort and healing to his family and friends. Rest In Peace. Dianne T. Nash
Dianne Nash
February 21, 2021
A great doctor and person. Thanks for saving my life
Marian novak
February 21, 2021
I am so sorry to learn of his passing. Dr. Harris was a wonderful surgeon. I had the pleasure of working with him and learning from him for many years.
Betty Lane
February 21, 2021
I worked at VBH in the 80s through mid 90s and had the privilege to are for many of Dr Harris´ patients. He was a wonderful, talented, kind physician and person. It was an honor to work with him.
Laura Glover, RN
February 21, 2021
My deepest symphaty, he was my favorite Dr. Very caring!
Wilhelmina Crickenberger
February 21, 2021
To the Harris family I extend my deepest sympathies to you,Thank you for allowing me to care for Dr. Harris , it was with joy and pleasure.
Sheila M. Waller
February 21, 2021
Mr. Harris (Billy) and Elizabeth, my thoughts and prayers are with you.
Tricia Davidson.
February 21, 2021
My prayers and condolences to the family. Dr.Harris was a great surgeon and one of the kindest people I have worked with.
Katie Walker Ross
February 21, 2021
What a great obituary of a great man.I had such great respect for your husband and dad. He did surgery on my leg in the early 1970s & I was a great admirer after that. My condolences go out to you, Marie, as well as to his children!
Anne Cooper
February 21, 2021
So Sorry for your loss. You are on my mind and in my prayers.
Debra McCabe( The Columns)
February 20, 2021
I´m so sorry for the loss of such a great man. I worked with Dr. Harris for many years in the OR. He was such a wonderful surgeon and so good to his patients. He treated the nursing staff so well. I will always cherish my memories of him.
Lisa Woodall
February 19, 2021
My thoughts and prayers are for the family during this time. I have very fond memories of Mr. Harris coming together with his beautiful wife (Marie) to the salon. I so enjoyed their smiles and wonderful personalities. He will be greatly missed. Sincerely, Jane Bailey, WC Beauty Salon Manager
Jane Bailey, Manager WC Beauty Salon
February 19, 2021