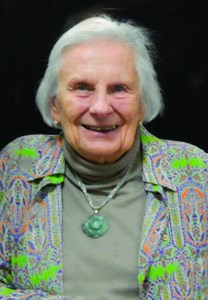 She was born on November 19, 1925, in South River, N.J., the daughter of Francis and John Politica. She was married to John "Jack" McMurray. After meeting at a USO dance during World War II they celebrated 60 years of marriage.

Jean was the 1st woman draftsman and architect for GE in the1940's, in New York City, and worked for the military as an aeronautical draftsman. In 1969, she designed the plans for the new St. John The Evangelist Church in Mahopac, N.Y. She was head of the Board of Elections for 10 years in Putnam County, N.Y. Jean had many talents and hobbies as a seamstress, collector of antiques, and her love of the Mahopac Garden Club where she was President. She was a Master Flower Show Judge and had received countless blue ribbons and awards. She volunteered endlessly at the Mahopac Historical Society, 4H Club, and St. John The Evangelist Church in Mahopac, N.Y.

In addition to her parents and husband, she was predeceased by a brother, Robert Politica.

Final burial will be made at St. Lawrence O'Toole Cemetery, Brewster, N.Y., at a later date.

In lieu of flowers, donations may be made in Jean's name to The American Foundation for the Blind.

To plant trees in memory, please visit our Sympathy Store.
Published by The News & Advance on Jan. 17, 2021.
MEMORIAL EVENTS
Jan
29
Mass of Christian Burial
10:00a.m.
Holy Cross Catholic Church
710 Clay Street, Lynchburg, Virginia
Funeral services provided by:
Tharp Funeral Home
GUEST BOOK
3 Entries
Aunt Jean was a very special and loving Aunt. My fondest memories were always sharing beautiful holidays and visits at the family home with holidays and and visits. May God forever watch over her and Uncle Jack amD My dear cousins and their families Forever grateful and eternal Peace. God Bless you and thank you for your sweetness and Love. Love, Susan xo
Susan Hanrahan - Niece
January 27, 2021
I am so sorry to hear of Jean´s passing. I thoroughly enjoyed our conversations during the few years that I styled her hair. You all are in my thoughts and prayers.
Cindy Vormittag
January 18, 2021
So sorry for you loss,Prayers forall
Holly Marsh Malone
January 17, 2021