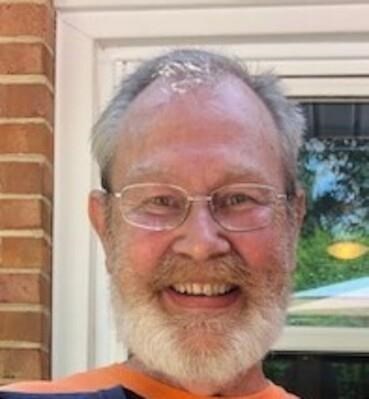 Passing through this earthly life far too soon on Wednesday April 7, 2021 was John William Artley, much loved husband, father and grandfather. He also left behind faithful friends far and wide, who appreciated his wit and humor as much as his hospitality and Bar-B-Que.

John was born June 24, 1951 to Ramona and Bill Artley in Elkhart, Indiana. As a Midwestern boy growing up in the Fifties, he loved water-skiing and tinkering on old cars. One of those "classic" automobiles, a 1958 Studebaker Hawk, won the heart of his future bride, Nancy Holderman, on their first date in 1969.

As a young married couple, John and Nancy moved from Florida to Indiana, raising children, pets and sometimes their financial situation. His time with Nibco led him to a passion for computers and code-writing. More time in Atlanta prepared him for the final move to the Shenandoah Valley. John always claimed "…the best decision we ever made." Once in the Valley, John joined Adelphia Cable, first at the local level contributing to their success, then at corporate to guide his team as coach and mentor.

Later, he and Nancy became local business owners within the Staunton community.

John is predeceased by his father, William A. Artley and beloved step-father, A. Verl Thompson, a nephew, Joseph Artley and most recently, by his mother, Ramona V. Thompson.

Adding to this list is a large gaggle of nieces and nephews that will remember stories of a sweet old curmudgeon with the deep voice and a lovely white beard who could herd cats, talk to the birds and quote Mark Twain.

The arrangements provided by Cremation Society of Virginia and a private celebration of life will be at a later date.

"Whenever you find yourself on the side of the majority, it is time to reform (or pause and reflect)." --Mark Twain, 1904

Theresa VB
Theresa
Coworker
April 16, 2021
If everyone, was like my brother

The world’d be different, cause he’s like no other

He never said no, to adopting a stray
Whether it was a friend or a cat, all could stay

If you asked him a question about something complex,
He’d know the answer,
off the top of his head

His wit was sharp, his laugh was grand,
He wasn’t afraid to make a political stand

He wasn’t too fond of corporate games,
He found such things, exceedingly lame

He was genuine and loyal, and usually frank,
So if you asked for his opinion, you might not say thanks

But his love for his family, was never in doubt,
For us the world was better, with him than without

We miss you, brother!

Alan
Brother
April 16, 2021
You have so many memories of the special man that was. May those memories keep you strong.
Graham and Donnette
Friend
April 15, 2021
I enjoyed working with John at the Frontier Culture Museum. We had many discussions from politics to recipes, grandchildren, birds, nature and always what Mark Twain would say. I’m so sorry for his passing. He was a great guy. My heartfelt condolences to Nancy and family.
Josephine King
Coworker
April 15, 2021
Nancy, please know that I am thinking of you. I am sorry for your loss and wish you the best in this new chapter of your life, Marney Gibbs

Marney Gibbs
Friend
April 15, 2021
John was a good man and friend. I worked with him and got to admire his wit and wisdom on a daily basis. Job changes and the world changes but John was a staple. I'm going to miss him. Prayers to Nancy and the rest of the family on their loss. He will be missed by all that knew him.
Barry Rutland
Friend
April 15, 2021
Showing 1 - 14 of 14 results