Andrew Moore Harrington, a talented endurance athlete, dedicated coach and community volunteer, passed away in the evening on Oct. 28, 2020 at age 40. Drew leaves behind a spirit of civic duty, not only in regards to the trails he groomed, maintained, skied, ran, hiked and walked his dogs on, but also in his career at the state of Alaska Department of Natural Resources where he worked as a water resources specialist.
Drew grew up in Washington, D.C., and spent summers at his family's cottage in upstate New York. He was a competitive swimmer through high school and then college at Alfred University in New York state. He arrived in Alaska in summer of 2003 to do a year's service with AmeriCorps; he found his home in Fairbanks and never left. In 2011, Drew completed a Master's of Science in natural resources management from UAF while also working for Camp Fire Alaska and serving as Youth Sports Director at Fort Wainwright.
Drew refused to allow a diagnosis of brain cancer in 2014 define his life. He carried his illness with quiet grace and a good dose of defiance. He continued to pursue his love of the outdoors and community, running four Equinox Marathons, as well as participating in AlaskAcross, the Wilderness Classic and the White Mountains 100 after his diagnosis. Always more than a participant, Drew founded the Angel Creek 50 Miler in 2015. He was involved in directing several local races including the Tanana River Challenge and the Northern Trail Running Series. He was voted the 2010 Running Club North Race Director of the Year for organizing the Northern Trail Running Series.
Drew finished some of Alaska's toughest endurance events including Crow Pass Crossing, Kesugi Ridge Traverse, Chena River to Ridge, Alaska Endurance Trail Run, the Frosty Bottom, and others. He was known for encouraging beginners and inviting participants of all abilities and ages. In the past three years, he dedicated personal resources and time to repairing the shelter cabin on the Chena Dome Trail. Before his death, the cabin was dedicated in his honor as the Drew Harrington Shelter Cabin.
Drew also found time to volunteer as a swim coach for the Lathrop/Hutchison/Monroe swim team. He was a photographer, a reader and a dog-lover. He loved working in his yard, pulling dandelions, and cutting wood. He dedicated many winter hours to grooming the Rosie Creek trails near his home, an activity he especially enjoyed with his new Skandic snowmachine. Drew was always kind and he kept his sense of humor and humility until the end.
The last seven years of his life, Drew shared with Molly Yazwinski who he married in 2015. Together they ran, skied and hiked the trails of Alaska, journeyed to New Zealand and enjoyed Molly's good cooking with friends. Drew is survived by his wife, Molly, mother, Candy Harrington, brother, sister-in-law and nieces, Rob, Stacie, Maddie and Abby Harrington and his dog, Kelsie.
For those wishing to remember Drew, Molly requests they make a donation to a local trails, sporting or outdoor group to encourage and enable others to pursue the activities that Drew so loved. For some suggestions, please see: tinyurl.com/yyrxkotj. There will be an outdoor celebration of Drew's life in summer 2021.
Published by Daily News-Miner on Nov. 8, 2020.
To plant trees in memory, please visit the Sympathy Store.
MEMORIAL EVENTS
To offer your sympathy during this difficult time, you can now have memorial trees planted in a National Forest in memory of your loved one.
MAKE A DONATION
MEMORIES & CONDOLENCES
6 Entries
November 12,
I remember meeting Drew the first time when he came to Cleveland with Molly to visit her grandmother, "Grand Mary".
Drew was always the gentleman who was kind and conscious to everyone who required his attention. He was a good listener and gave a gentle smile and a head nod to affirm you.
I always thought Molly was so blessed to have found him. He was a rare treasure.
My heart goes out to all who love him and are missing him. One thing is certain.... he will live on in our thoughts, tears , shared jokes , laughter, memories and even favorite shared songs .
Betty Ann
Friend
November 12, 2020
This photo is from 2015 when we had a Tuesday night running group reunion when Maria and I were back in Fairbanks for a visit. The last time we saw Drew. I first met Drew in 2009 and soon realized he was a passionate trail runner and loved everything about the trails, the people and the land we use. I remember Drew as a caring person, trail passionate and an organizer. I have done just a few races with Drew - like the Equinox marathon and Run for the refuge. This was "shorter, flat stuff", as I think he would have put it. The trails up by Ester Dome/Goldstream were much used by him, and I particularly remember him lively telling about the black bear he and his dog literally more or less ran into on the trails there. Fairbanks will be different next time we visit. Happy trails running buddy!
Stian Stensland
Friend
November 11, 2020 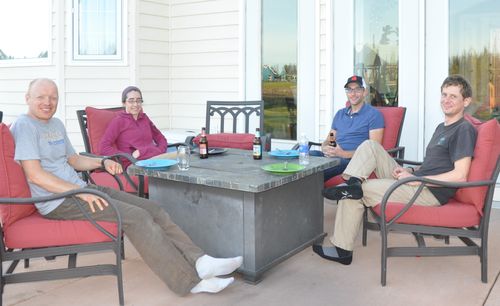 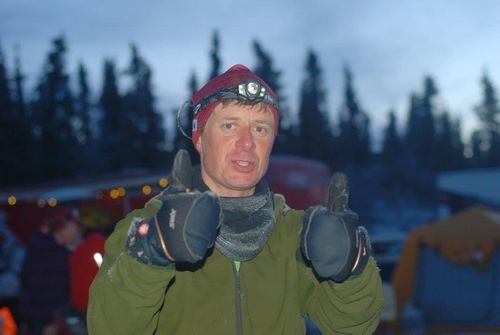 Drew was an amazing person to know and work with. I thought of him as a little brother. My heart is broken for his wife and family. He will surely be missed.....
Christine Ballard
Coworker
November 9, 2020
Drew was such an incredible guy. He welcomed Johanna and I into his community after we arrived in Fairbanks in 2009. I remember him as incredibly humble, good natured, and a true inspiration. His commitment to backcountry adventures felt unbridled and incredibly impressive. I remember when he had started dating Molly and it was obvious that they were great together. I am so sorry to hear of his passing. Molly and Drew's family will be in my thoughts.
Chas Jones
Friend
November 8, 2020
Thank you for all you did for Fairbanks, Drew. We are a better community, better people, because of your work.
Ken Gieser
Acquaintance
November 8, 2020
Showing 1 - 6 of 6 results