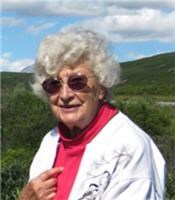 BORN
1925
DIED
2021
1925-2021
Betty W. (Leis) Pearson passed away the evening of Labor Day, Sept. 6, 2021, in Wasilla, Alaska. She was 96 years old and had lived a full life, full of family, travel, reading and volunteer service.
Born Feb. 1, 1925, in St. Anthony, Idaho, to Jacob H. and Amalia Leis, she spent her early years in southern Idaho. In 1950, she married Alfred B. Pearson, Jr., an Air Force officer. In the next decade, they lived overseas where her first two children were born, Bill in Taiwan and Mike in Iran, and after returning stateside, two younger children, Greg and Janet, were born in New Jersey. In 1961, Betty and Alfred moved their family to the Fairbanks area so Alfred could work at Clear AFB. Alfred passed away in 1978.
Betty lived with her family in the Anderson and Fairbanks areas for over 50 years. She travelled a lot during her time as a widow, with sisters and children, worked for Play-n-Learn in Fairbanks, gardened, read and did volunteer work for a few charities in Fairbanks. An avid reader, she was a self-taught expert on literature about women living in the frontiers of Alaska and Canada, and a collector of books on this subject.
In 2012, she moved to the Palmer area to be closer to Bill and Janet and their families. She maintained an independent life in her own apartment until long-term illness finally required she have nursing home care for the last few weeks of her life. She passed away peacefully, ready to go home to her Lord.
Betty was predeceased by her parents; her husband, Alfred; and her son; Michael Pearson (2007). She is survived by her other three children, Bill (Kathy) of Anchorage, Greg (Denise) of Washington state, and Janet (Kelly) Blalock of Palmer, Alaska. She has five grandchildren (Cody, Abby, Emily, McKenzie and Marshell Pearson) and six great-grandchildren. She was also preceded in death by eight siblings.
Per her request, there will be no funeral services. In lieu of flowers, get a library card, and patronize and support your local library.
Published by Daily News-Miner on Sep. 14, 2021.
To plant trees in memory, please visit the Sympathy Store.
MEMORIAL EVENTS
To offer your sympathy during this difficult time, you can now have memorial trees planted in a National Forest in memory of your loved one.
MAKE A DONATION
MEMORIES & CONDOLENCES
4 Entries
My condolences to the Pearson & Blalock families on the passing of a great lady. Karen Southwood Anderson, AK
Karen (Shields) Southwood
September 18, 2021
I am sure going to miss my Aunt Betty.
Gloria Derby
Family
September 16, 2021
Long ago, when Play 'n' Learn Day Care was really young with a very tight budget. Betty was the cook, who wisely bought and carefully cooked really good and interesting meals for students and teachers. She was also a thoughtful and caring woman and I have never forgotten how much of herself she gave to the enterprise. My thoughts are with you and your families.
Elizabeth Cook
Other
September 15, 2021
Dearest Bill, Greg, Janet and Families, Your Mom was a wonderful lady. Doug and I will treasure our memories of her and offer your family our deepest condolences. Hugs and love to you all.
Doug & Kathy Maydole
Friend
September 14, 2021
Showing 1 - 4 of 4 results