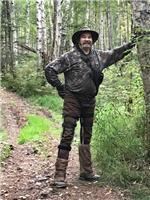 BORN
1960
DIED
2021
FUNERAL HOME
Chapel of Chimes Funeral Home
415 Illinois St.
Fairbanks, AK
Blain S. Abbott, 60, of Two Rivers, passed away at home June 7, 2021, of natural causes.
Blain was born on Aug. 10, 1960, in Henderson, Nevada, to Lem and Barbara Abbott. He later moved to Fairbanks, where he lived for 45 years. Blain served in the United States Army and the Air National Guard, from which he retired as a SSGT/EF crew chief. Blain was a member of the Church of Jesus Christ of Latter-Day Saints and was a part of the Single Action Shooting Society (SASS) and Golden Hearts Shootist Society. Blain was an avid fisherman, hunter and trapper. He enjoyed all shooting sports. He was a cat lover and treated his cats better than he treated most people.
Blain was preceded in death by his parents, Lem and Barbara Abbott, and his brother, Kurt Abbott.
Blain is survived by his siblings, Brian Abbott of Payson, Utah; Michele Abbott of Las Vegas, Nevada; Russell Abbott of Fairbanks, Alaska; Shalayne Abbot of Las Vegas, Nevada; and Blair Abbott of Payson, Utah.
A memorial service will be held for Blain at the LDS Church located at 304 Lazelle Road, Fairbanks, AK, 99712, on Thursday, June 24, 2021, at 6 p.m.
We regret the passing of our dear brother Blain, who was beloved by all. He will be truly missed. Arrangements have been entrusted to Chapel of Chimes Funeral Home.
To plant trees in memory, please visit our Sympathy Store.
Published by Daily News-Miner on Jun. 24, 2021.
MEMORIAL EVENTS
Jun
24
Memorial service
6:00p.m.
LDS Church
304 Lazelle Road, Fairbanks, AK
Funeral services provided by:
Chapel of Chimes Funeral Home
MEMORIES & CONDOLENCES
Sponsored by Chapel of Chimes Funeral Home.
1 Entry
Sorry to hear. I worked with Blain at the 168th Air Guard.
Tim Berg
Work
June 24, 2021
Showing 1 - 1 of 1 results