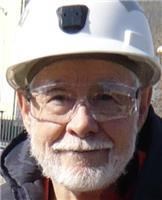 BORN
1934
DIED
2021
Don Murray Triplehorn "Trip" passed away on Dec. 25, 2020. He was born July 24, 1934, in Bluffton, Ohio, where he had, in his words, a "pure Americana" childhood with his two brothers and sister, living on Main Street, camping with the Boy Scouts, playing football and baseball, and helping his father distribute fuel oil, bucket by bucket, to local farms. During this humble beginnings, he developed a exceptional inquisitiveness that was the driving force throughout his life.
Trip started observing nature, bird watching and collecting rocks at an early age. In his own words, he was a geologist before he even knew what the word meant. Keen for learning, he was valedictorian of Bluffton High School's class of 1951 and jokingly talked about how he evaded giving the commencement speech.
After graduation, he received a scholarship to Ohio Wesleyan University majoring in geology and participating in ROTC. Not surprisingly, he met his wife of 62 years on a university geology field trip. After graduating in 1956, he attended Indiana University and received a Master's degree in geology in one year. Then he served six months in the Air Force at Clinton County Air Force Base, Wilmington, Ohio. Military service didn't distract him from his love of science, and when he was finishing his service, the base commander commented that Trip was a geologist when he arrived and a geologist when he left.
During his undergraduate years, his summers were spent working for SOHIO in various locations: Ohio, Colorado, Texas and Utah. He received his Ph.D. from the University of Illinois in 1961with his dissertation on glauconite. Subsequently, he taught for one year at Wooster College in Ohio and then joined Sinclair Oil's Research Lab in Tulsa, Oklahoma. This led to a number of years doing exploration in Alaska.
When the laboratory closed in 1969, he accepted a faculty position at the University of Alaska Fairbanks. He packed his family and two dogs into an International Travelall and journeyed north on the Alcan Highway. At the university, he enjoyed teaching and challenging students with real-life examples from his field experiences. He pursued research on Alaska coals, contributed to evidence for the Cretaceous-Tertiary boundary meteorite impact through his discovery of shock quartz, and investigated micrometeorites during his retirement. Ever curious he always was pursuing pet interest such amber, meteorites and coprolites (dinosaur feces).
Active in shaping the world around him, Trip served on the state of Alaska Oil and Gas Royalty Advisory Board, as head of the UAF Geology Department, and president of the Goldstream Valley Lions Club.
His constant observation of the world led him to make lists of funny street names in Fairbanks, marvel at different designs for bicycle racks and to hypothesize about the bullet holes in street signs on Goldstream Road. He would proudly compete with his wife to see who collected more nickels and dimes during spring breakup. His interests took him around the world exploring in the Sahara, rafting down the Colorado River and pursuing dinosaur bones on the North Slope. He traveled to Argentina and Ethiopia, climbed Kilimanjaro, and visited mines in South Africa. After his visit to the estate of his hero Charles Darwin, he celebrated Darwin's birthday every year with students and colleagues at the university.
He enjoyed walking his English springer spaniels and was a regular participant in the Equinox Marathon and Midnight Sun Runs, the Audubon Christmas Bird Count and the Goldstream Lions Spring Cleanup.
His passion for sharing ideas and challenging people to be critical thinkers shone in his teaching and his facilitating of community book reading groups. In 2017, the Noel Wien Library Foundation recognized his more than 30 years leading the Great Books and Science Book Discussion Groups. Nothing pleased him more than sharing a good book with someone.
He is survived by his wife, Julia (Judie)Triplehorn, and four children, Clay Triplehorn (Debbie) and Carl Triplehorn, who reside in Fairbanks, Alaska; Joel Triplehorn of Eugene, Oregon; and Stella Furr of Hillsboro, Indiana. He is also survived by his brothers, Chuck Triplehorn (Linda) and John Triplehorn; his sister, Lora (Jim) Roberts; grandchildren, Jared and Mikayla Triplehorn, and Josie and Alex Furr; and his springer spaniel dogs, Chocolate, Diamond, Frosty and Katie.
To plant trees in memory, please visit our Sympathy Store.
Published by Daily News-Miner on May 9, 2021.
MEMORIAL EVENTS
No memorial events are currently scheduled.
To offer your sympathy during this difficult time, you can now have memorial trees planted in a National Forest in memory of your loved one.
MEMORIES & CONDOLENCES
10 Entries
Dr. T,

Our condolences to you and your family. We are very sorry to know that your father has passed away and pray that God give you and family comfort and strength. God bless you and may all the wonderful moments and memories of him, make your heart smile. We are truly sorry for his passing. Catherine & Maria
Catherine
Friend
May 30, 2021
Judie and Family~We were so sorry to hear of Don's passing over the Christmas holidays. What an adventurous and full life he and your family have had together! Our family has been blessed to have crossed paths with yours.
The Santora and Hostina Family
Friend
May 19, 2021
My condolences to the family . May you find comfort in your treasured memories and Gods promise to return our loved ones . 1st Thessalonians 4 : 13 & 14 .
R W
May 13, 2021
Many fond memories of Trip and all the Triplehorn family, our neighbors in Fairbanks. I am very sorry for your loss but also encouraged by Don’s example of a life well lived. I remember him as a enthusiastic supporter of our boy scout troop and I had many fun scouting events with his sons Clay, Carl and Joel. My deepest condolences.
Kevin Kaltenbach
Neighbor
May 11, 2021
Sorry for you loss Dr. Clay Triplehorn.God Bless
Leonard Thiltgen
May 10, 2021
Dr. Clay Triplehorn So sorry for your loss. God Bless
Leonard Thiltgen
May 10, 2021
My condolances to the family. Don was an interesting fellow scout!
Bob Van Veldhuizen
Acquaintance
May 9, 2021
Judie, we will keep Trip in our memories and look forward to the time we can see you again in person.
Mary Farrell
Friend
May 9, 2021
He was a wonderful Geology Professor.
Nan Suddath
May 9, 2021
Judy and family, I’m so very sorry for your loss. Fond memories of Don at the UAF pool and even more fun memories as a babysitter when the kids were little. I hope that soon your sadness is outweighed by warm memories.
Yonni Fischer
May 9, 2021
Showing 1 - 10 of 10 results