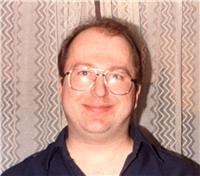 BORN
1961
DIED
2021
Ernest Cholwell Burggraf, known to family and friends as "Ernie," passed away in the early morning hours of March 19 due to hypothermia. From what information can be gathered, he apparently couldn't start his car at the end of his work shift at the Fairbanks Resource Agency (FRA) and decided to walk the three to four miles to his home. He was dressed warmly with a heavy coat and warm boots. It appears, though, that he was unable to find the footbridge that had been constructed for pedestrian traffic across the Chena River while the University Avenue Bridge is being rebuilt. He then made the fateful decision to walk across the river to the other side. Somewhere along the way, he fell through the ice into the frigid water.
He was able to pull himself out but later succumbed to the cold as he stopped to rest near the embankment at the south side of the bridge. He was 60 years old.
To family and friends, his kindness and affable nature will be missed.
A funeral service will be held at the Cowles Street Chapel of the Church of Jesus Christ of Latter-day Saints on Saturday, July 10, at 1 p.m. A reception will follow, after which a dedicatory prayer will be offered at the grave site at Northern Lights Memorial Park. All are welcome.
Born on February 17, 1961, at the old St. Joseph's Hospital, Ernie grew up in Fairbanks, graduating from West Valley High School in 1979. He served a brief stint in the Army and was honorably discharged in 1981. He then went on to take courses at the Alaska Vocational Technical Center in Seward and obtained a certificate for work in the food industry in 1984. Deciding not to pursue restaurant work, he became a janitor with FRA.
Around the time that he left the Army, Ernie began to seek out deeper meaning in life. He joined the Church of Jesus Christ of Latter-day Saints in January 1982 and went on to serve a mission in the San Bernardino, California, area from 1985 to 1987. He continued to be active in his ward at church and was usually one of the first faces people would see on Sunday as he greeted them and gave them a program for that day's worship service.
Ernie was a gentle soul and never took offense at the actions of others. His laughter and his smile brightened up family dinners which he regularly attended every Sunday at his mother's house.
Ernie is survived by his mother, Malle Burggraf; his father, Roger Burggraf (DeLois); his younger brother, Indrek (Elisa) and their daughter, Mari; as well as his other younger brother Karl's daughters, Jasmine Couch (Brenden) and Lindsay Jones (Brian) and their families. Ernie's brother Karl preceded him in death in 2017.
To plant trees in memory, please visit our Sympathy Store.
Published by Daily News-Miner on Jul. 7, 2021.
MEMORIAL EVENTS
Jul
10
Calling hours
Cowles Street Chapel of the Church of Jesus Christ of Latter-day Saints
, AK
Jul
10
Funeral service
1:00p.m.
Cowles Street Chapel of the Church of Jesus Christ of Latter-day Saints
, AK
MEMORIES & CONDOLENCES
2 Entries
Our deepest condolences to the Burggraf family from Jeff and Julie Keener.
Jeff Keener
July 14, 2021
Ernie was an angel living among us. His many kindnesses will be remembered for a long time to come. I am so sorry for your loss.
Renée Kappen
Friend
July 9, 2021
Showing 1 - 2 of 2 results