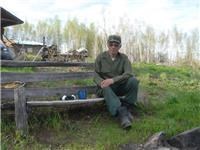 BORN
1919
DIED
2018
Our beloved father, uncle, grandfather and friend, Frederick Thomas, passed away at home in the early hours of Wednesday, Jan. 10, 2018.
He was born in Fort Yukon on May 11, 1919, to Jacob L. Thomas and Margaret (Schaeffer) Thomas. His father Jacob, originally from Wisconsin, arrived in the Yukon in the early 1900s, working on a steam boat taking miners to the Klondike Gold Rush, where he eventually met his future wife, Margaret Schaeffer, in Circle City.
Fred's parents first lived in Fort Yukon before traveling up to the Black River, 20 miles below the mouth of the Grayling River. Fred was the oldest of ten children, three of which passed away at a young age. Raised on the Black River, he learned to survive by trapping, fishing, hunting, gardening and harvesting wild berries. These skills were passed on by Fred to many in his 98 years. Fred will always be known as the most notorious lynx trapper around.
He was a ferocious reader of books and magazines of all subjects. He learned how to create a fishnet by reading a book while gathering his strength back from being ill from tuberculosis. He retired as a civil servant after working at the air force base in Fort Yukon (1958-1976) and then had plenty of time for full-time trapping.
He married Charlotte William from Old Rampart/Chalkyitsik. They and their seven children lived and traveled between the Black River, Grayling and mainly Fort Yukon when the children were old enough to go to school.
He was known as a hard worker and his last moose hunt was at the age of 95. In his last years, he loved to sit around the campfire with family and friends, telling stories.
As Fred got older and older, he would always tell us how thankful he was to be alive. He would say that after he was diagnosed with TB and was sick for three years before recovering, he never thought he would live very long. He wished that he could live until he was 50 years old and he would be happy with that. Grandpa Fred, your family is so happy that God gave you an extra 48 years with us.
Fred is survived by his children, Shirley Thomas, Freda James (Arthur), Jimmy Thomas, Judy Thomas-Cradock (Chris), Michael Thomas, Mimi Thomas; his grandchildren, Hans, Kris, Bobbie, Vanessa (Paul), Courtney, Kayla, Jesse, Simon, Ruby, Peggy; and his great-grandchildren, Frederick, Sapphire, Jerricho, Raynee, Troy and Elise; his brother, Albert Thomas; and many nieces, nephews and godchildren.
He is preceded in death by his wife, Charlotte; their daughter, Rita Marie; and his siblings, Margaret Kate, Jimmy, Joseph, Bill, John, Harry, Emil and Charlie.
Funeral services for our beloved dad, uncle, grandfather, friend and elder, was held at 2 p.m. Jan. 13 at the St. Stephens Church in Fort Yukon. A potluck followed at the tribal hall in thanksgiving and celebration of his life.
His storytelling, smiles and inspirational, hard work ethic will be missed. In the end, Dad said, "Everything will be all right."
Published by Daily News-Miner on Jan. 16, 2018.
To plant trees in memory, please visit the Sympathy Store.
MEMORIAL EVENTS
To offer your sympathy during this difficult time, you can now have memorial trees planted in a National Forest in memory of your loved one.
MAKE A DONATION
MEMORIES & CONDOLENCES
3 Entries
My condolences to the Thomas family. May the God of comfort give you strength during this difficult time.
January 17, 2018
I'm sorry for your loss act 24:15
January 16, 2018
Memories of the very best lynx trapper EVER! Time to let someone else break trail Fred. Rest easy.
Pete Buist
January 16, 2018
Showing 1 - 3 of 3 results