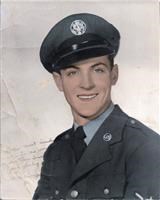 BORN
1935
DIED
2021
LaVerne (Lennie) Hartman passed away on Feb. 26, 2021, after a brief battle with COVID-19 at MatSu Regional Hospital, Alaska.
A celebration of life will be held later in 2021 at Kenny Lake Chapel cemetery in the Copper River Valley.
Mr. Hartman was born on July 28, 1935, in Millersville, Pennsylvania. He joined the Air Force in 1955 and attended school after basic training in Biloxi, Mississippi, to become an Airborne electronics repairman. While in Mississippi, he met his wife of 65 years, Thelma Donahoe.
They married in June 1955. He was stationed at Elmendorf Air Force Base in Anchorage, Alaska. After being honorably discharged from the Air Force Reserves in 1962, he held a variety of jobs until he was hired by the state of Alaska, Department of Transportation, as a heavy equipment operator in 1972. He worked at the Thompson Pass, Ernestine, Chitina and Deadhorse airport stations, retiring in 1990 as the airport manager.
They homesteaded in the Copper River Valley in 1963 and raised four children, then moved to Fairbanks in 1983. They lived in Anchorage from 1990 to 2005. Moving to North Pole, they lived there until 2019. Lennie attended Alaska Bible College and graduated with a Bachelor's of Christian education and was ordained in 1971. He earned his Master's Degree in servant leadership from Azusa Pacific in 2002.
He is survived by his wife Thelma, son, Michael, and daughter, Lara, and nine grandchildren and two great-grandchildren. He was proceeded in death by two of his children, LaVerne Jr. (Buddy) Hartman and Peggy Hartman.
To plant trees in memory, please visit our Sympathy Store.
Published by Daily News-Miner on Mar. 3, 2021.
MEMORIAL EVENTS
No memorial events are currently scheduled.
To offer your sympathy during this difficult time, you can now have memorial trees planted in a National Forest in memory of your loved one.
MEMORIES & CONDOLENCES
5 Entries
Loved him like my own Dad. Truly blessed to have been a small part of his family's lives.
Lois Ramocki
Friend
March 25, 2021
A fine man----I'm lucky enough to have been his niece. He's the only one of my father's brothers whom I could confidently talk to about sensitive family matters. I appreciated his insight and honesty when it came to speaking freely. Thank you for having a profound , positive influence on my brother, Carl Jr.
Donna Hartman
Family
March 11, 2021
Dear Thelma,
We are sorry to hear of your loss. So thankful that Lennie was serving his Lord. "Precious in the sight of the Lord is the death of his saints." (Psalm 116:15)
With our love and prayers for you and your family, David & Kay Henry

David Henry
Friend
March 9, 2021
My condolences to the family . May you find comfort in your treasured memories
and Gods promise to return our loved ones . 1st Thessalonians 4 : 13 & 14 .
March 4, 2021
I appreciated Mr. Lennie as a friend. He loved God, his family, and other people. He was honest, funny, hard working, and loyal
Dan Henry
Friend
March 3, 2021
Showing 1 - 5 of 5 results