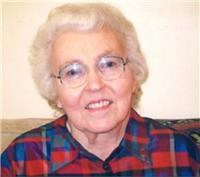 BORN
1927
DIED
2021
Sept. 29, 1927 - July 19, 2021
Louise Knutson Maakestad, age 93, died on July 19, 2021, at Bethany Life in Story City, Iowa. Formerly a resident of the Anchorage Pioneer Home of Alaska (2008-2019), Louise moved to Iowa in the fall of 2019 to be near her youngest daughter and family.
Christened Louise Marcele Knutson, she was born on Sept. 29,1927, in the Scandinavian farming community of Oslo, Texas. Her parents were Cora Geneva Stedje Knutson and Emil Knutson. Louise was the second of five children. Her father was an industrious farmer and rancher. Her mother, Cora, was the bookkeeper for the Knutson farming business. Soon, Emil was successful enough to have the "Knutson Grain Elevator" where wheat and maize were stored from local farmers. Louise loved growing up on the prairie of the Texas panhandle.
Louise and her siblings learned to play the piano and organ and often played at the Oslo Lutheran Church. Louise graduated from Gruver High School at age 16. She attended St. Olaf College in Northfield, Minnesota, from 1944 to 1946. Louise then attended West Texas State Teachers College, Canyon, Texas, and graduated in the spring of 1948 with a teaching degree. Louise met a handsome young pastor, John Maakestad, at her sister Leona's wedding to Joel Stavlo on April 4, 1948. John was a close friend of the groom. A romance began and a courtship developed through letters. John and Louise were married on Sept. 5, 1948. Louise became a pastor's wife and the couple settled in the parsonage at Freeborn Lutheran Church in Stanwood, Washington.
Alaska beckoned and John received a call to serve as pastor to the Lutheran Church in Fairbanks, Alaska. Moving in May 1950, their first child, Laura, was born, followed by sons Walter and Gene (deceased). In 1954, they answered the call to serve in Shishmaref, Alaska (an Inupiat village on a barrier island in the Chukchi Sea), where their daughter Ellen was born. Just prior to statehood, the family moved to Nome, where they served Our Savior's Lutheran Church in 1958. Daughter Muriel was born there in 1959. All the while, Louise and John and their children grew to love Alaska and the Inupiat people of the Seward Peninsula.
In 1962-63 the family moved to Berkley, California, as John attended Clinical Pastoral Education. In December of 1963, the family of seven drove the AlCan Highway from Texas to Anchorage, where John began to serve as chaplain of Alaska Psychiatric Institute in January 1964. Daughter Carol was born the following year. The family joined Lutheran Church of Hope and Louise remained a dearly loved member there through to her final days.
John and Louise enjoyed their years in Anchorage, watching their children grow up to adulthood. They enjoyed berry picking, crosscountry skiing, camping, fishing, boating with their family and friends, and eventually building a cabin on Lake Kashwitna. They found many opportunities to continue their relationships and ministry alongside the growing Inupiat community in Anchorage, with their close ties to Shishmaref, Brevig Mission, Teller, Wales, Nome and Fairbanks. Louise would play piano for services, accompany the Native outreach choirs, and organized the children's Christmas Eve program for many years. They felt it a privilege to be a part of the formation of the outreach that became the Alaska Native Lutheran Church, a faith community they both dearly loved.
Louise was a devoted wife, mother, grandmother, aunt, sister and friend. She had a wonderful sense of humor, a genuine interest in others, and loved people of all walks of life. She loved birdwatching, scenic drives, good books and good conversation. She was brave, adventurous, and a pioneer. Her faith and trust in Jesus has been her guide and strength her whole life through.
Louise is preceded in death by her son, Gene (Aug. 22, 1976 - hang gliding accident), and her husband, John Maakestad (Dec. 31, 2014). She is survived by daughter Laura Sullivan (John Sullivan, deceased Jan. 23, 2015) of Monroe, Washington; her son Walter (Molly) Maakestad of Lake Minchumina; daughters Ellen Maakestad and Muriel Maakestad of Anchorage; daughter Carol (and Steve) Anderson; grandchildren Ingrid, Joshua and Ethan Anderson of Ames, Iowa, and granddaughter Kari Maakestad Gimbel of Lake Minchumina; and great-grandchildren Molly Jean, Piper Lee, and Henry Jon Gimbel of Lake Minchumina; and grandson Jon Bernard Maakestad of Fairbanks, Alaska.
The funeral will be held on Monday, July 26, 2021, at Central Lutheran Church, Anchorage, Alaska.
The visitation will begin at 12:30-1:45 p.m. The funeral will be at 2 p.m.
Published by Daily News-Miner on Jul. 29, 2021.
To plant trees in memory, please visit the Sympathy Store.
MEMORIAL EVENTS
Jul
26
Service
12:30p.m. - 1:45p.m.
Central Lutheran Church
1420 Cordova Street, Anchorage, AK
Jul
26
Funeral service
2:00p.m.
Central Lutheran Church
1420 Cordova Street, Anchorage, AK
MAKE A DONATION
MEMORIES & CONDOLENCES
1 Entry
My deepest condolences to the Maakestad family and especially to Ellen, with whom I went to high school.
Anne Sudkamp
Other
July 30, 2021
Showing 1 - 1 of 1 results