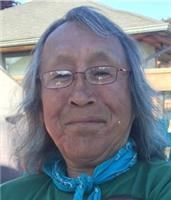 BORN
1951
DIED
2021
Our beloved, Peter Carl Esmailka, went to be with the Lord on July 31, 2021, in Fairbanks.
Peter was born, April 5, 1951, in Nulato to Thecla Marina McGinty and Berchman Joseph Esmailka Sr., both of Nulato. He was named after his grandfather, Peter Esmailka, and was known as "Big Pete" to many of his friends across Alaska.
Peter was raised in a subsistence lifestyle with his siblings. In the winter, he traveled to winter camp in the Kaiyuh Flats. In the summer, he spent his time at several fish camps surrounding Nulato. Some of his greatest moments were living the traditional Athabascan lifestyle. He always spoke about how he loved that way of life and how he enjoyed trapping and hunting with his dad at Eagle Island. He spoke often of all the wonderful Native food he grew up on and how he was never hungry. As he grew older, Peter spoke often of going back to that lifestyle. It was a simple and fulfilling lifestyle for him.
Peter was also an enthusiastic dog musher and loved playing baseball in his younger days. He was a great storyteller and could make just about anyone laugh.
Peter attended Mt. Edgecumbe High School in Sitka, eventually transferring to Tanana High School, where he graduated. He worked many jobs all over Alaska and the Lower 48 throughout his life, including working on the Alaska pipeline, laborer, trapper, fisherman, carpenter and wildland firefighter. He married Wendy Rosen, and they had two daughters. His greatest joy was his kids, and he was a very proud and loving father. He was overjoyed when he became a grandfather and was excited to see his grandchildren every chance that he could. He will be missed sorely by everyone who had the pleasure of knowing him.
Peter is survived by his daughters, Eve and Lauren (Cheryl Williams) Esmailka; grandchildren, Samantha, Blake, Treva, Henley, Keagen and Lainey; siblings, Mabel Generous, Karen (Emil) Sam, Harold Sommer, Tom (Norma Williams) Esmailka, Lawrence Esmailka, Rose (Dion Alexander) Demoski, Tina (James) Martin and Charlene Demoski; many nephews and nieces across Alaska and the Lower 48; his very special friend that he considered a brother, Percy Silas; and numerous extended family and friends.
He was preceded in death by his parents, Thecla and Berchman Esmailka Sr.; siblings, Francis Esmailka, Berchman Esmailka Jr., Geraldine Shank-Solomon and Robert Esmailka; brother-in-law, Peter Solomon; numerous extended family and friends.
Funeral services will be held in Nulato at 11?a.m. Friday, Aug. 6, 2021. Peter will be laid to rest at the Nulato Cemetery followed by a traditional potlatch later that evening.
Published by Daily News-Miner on Aug. 5, 2021.
To plant trees in memory, please visit the Sympathy Store.
MEMORIAL EVENTS
Aug
6
Funeral service
11:00a.m.
Nulato , AK
MAKE A DONATION
MEMORIES & CONDOLENCES
4 Entries
We came to love Big Pete when stayed with my family as a Boarding Home Program Student while he was attending high school in Tanana. He was a good student, and a great addition to our family. I am proud to have been his temporary "mom" -- and am sad that he has left us so soon! R.I.P. Big Pete!
Mary Moses Edwin
August 17, 2021
Rest easy cuzzin Pete, may you watch over all of us here.
Evelyn Ekada
August 11, 2021
Rest in peace Big Pete:)
Tonya Herrera
Other
August 7, 2021
Peter was kind & joyful - he always brought an extra smile with him. The presence (& presents) of his stories will be much missed.
Hannah Hill
August 6, 2021
Showing 1 - 4 of 4 results