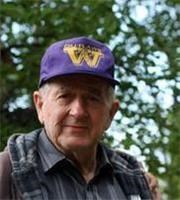 BORN
1934
DIED
2020
Raymond Paul Nelson, 86, of Weleetka, Oklahoma, went home to be with the Lord Saturday, Oct. 24, 2020.
Raymond was born Jan. 19, 1934, in Dustin, Oklahoma, to Virgil Desco Nelson and Gladys "Chastain" Nelson. While living in Hurlong, California, Raymond met Mary Jane McDaniel. They were married in Reno, Nevada, on Nov. 21, 1952. Raymond remained in the Army and he and Jane, as she preferred to be called, were married 59 years until her death in March 2011. They were blessed with seven children, 18 grandchildren and 32 great-grandchildren.
Raymond spent 20 years serving his country in the U.S. Army. He served a tour of duty during the Korean War and two tours during the Vietnam War. While serving in the Army, Raymond was awarded a Purple Heart, Vietnam Service Medal, a Bronze star, National Defense Service Medal and the Vietnam Campaign Medal. Of all the places Raymond and Jane lived and served, Alaska was the place they called home.
Raymond retired in Fairbanks, Alaska, after his 20 years with the U.S. Army. After retiring he spent two years as a police officer with the Fairbanks Police Department. He then went to work for Civil Service at Eielson Air Force Base just south of Fairbanks. In 1973 he heard God's call and he served as pastor of the First Baptist Church in Delta Junction, Alaska, from 1974 to 1979. After leaving the church in Delta he continued pastoring throughout Alaska and spent missionary tours in Africa and Germany.
Raymond was an avid hunter and fisherman. He spent many happy years hunting and fishing with family and friends all over Alaska. But his real love was flying. He worked hard to obtain his license and loved spending time in the air. It was a sad day when he could no longer get in his plane and take to the skies.
After Jane's death he met Ruby Bernice Boling, and they married on Dec. 10, 2011. They were married until her death in August 2020. With his marriage to Bernice he was blessed with three more adult children, two adult grandchildren and four great-grandchildren.
Raymond was preceded in death by his father, Virgil; mother, Gladys; brother, Junior Lee; wife, Jane; wife, Bernice; and grandson, Joshua Marchuk.
As a father, grandfather and great-grandfather. he was much loved and will be greatly missed.
To plant trees in memory, please visit our Sympathy Store.
Published by Daily News-Miner on Jul. 6, 2021.
MEMORIAL EVENTS
No memorial events are currently scheduled.
To offer your sympathy during this difficult time, you can now have memorial trees planted in a National Forest in memory of your loved one.
MEMORIES & CONDOLENCES
0 Entries
Be the first to post a memory or condolences.