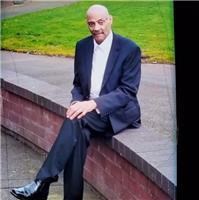 BORN
1948
DIED
2021
FUNERAL HOME
Serenity Seattle Funeral Home & Cremation
451 SW 10th St., Suite 111
Renton, WA
Sunrise: March 25, 1948. Sunset: June 10, 2021.
Ronald Stephen Lenear was born in Detroit, Michigan, to Maxine Beatrice Key and Gus Lenear. He attended St. Clair Elementary school, Hutchinson Middle School and Northern High School. Ronald was known to be a jokester and loved to torment his friends and family. His sisters described him as a mischievous teenager who got lots of spankings. Ronald loved to laugh and share stories of his life. He loved God and was highly active within the church, Fairbanks Christian Center. Ronald attended church every Sunday up to two weeks prior to God calling him home.
Ronald's hobbies and interest were cars, motorcycles, movies, photography, BBQ, fishing, camping. He was known as a handyman who helped all who would ask of him. He enjoyed spending time with his kids camping, fishing or just being together at a family gathering.
Ronald was drafted in the Army Jan. 29, 1968, and received an honorable discharge Jan. 28, 1970. He was stationed at Fort Wainwright in Fairbanks Alaska, where he went on to receive a National Defense Service Medal and a Good Conduct Medal. After his discharge from the military, Ronald resided in Fairbanks, Alaska, where he started a family and remained there for over 40 years. He began his career with the city of Fairbanks and retired after being employed there 30 years.
Preceded in death are his parents, Maxine Beatrice Key Lenear and Gus Lenear; brother, Sydney Lenear; and nephew, Kinte Veney.
He is survived by his loving wife, Gloria Roberts-Lenear, siblings, Julie Lenear, Janet Lenear, Jackie Roston, Joyce Lenear, first wife Theressa Lenear and children, Bobby Lenear, Loren Lenear, Beatrice Lenear-Enser, Ronald Lenear II, Hakeem Lenear, Terron Lenear, Sharrone Ingram, daughter from Detroit, sister-in-law Cheryl Coleman-Veney and his nephew Kenyatta Veney, who he saw as a son. He had a host of nieces, nephews, grandchildren and great-grandchildren. Ronald will also be missed by all of his lifelong friends.
Funeral arrangements entrusted to Serenity Funeral Home of Renton, Washington.
Published by Daily News-Miner on Jun. 16, 2021.
To plant trees in memory, please visit the Sympathy Store.
MEMORIAL EVENTS
Jun
18
Visitation
10:00a.m. - 10:55a.m.
New Beginnings Christian Fellowship
19300 108th Ave SE, Renton, WA
Jun
18
Funeral service
11:00a.m.
New Beginnings Christian Fellowship
19300 108th Ave SE, Renton, WA
Jun
21
Graveside service
9:00a.m.
Tahoma National Cemetery
18600 SE 240th St., Kent, WA
Funeral services provided by:
Serenity Seattle Funeral Home & Cremation
MAKE A DONATION
MEMORIES & CONDOLENCES
Sponsored by Serenity Seattle Funeral Home & Cremation.
5 Entries
So sorry to read of the passing on Ron Lenear. I have many fond memories of working with Ron at City of Fairbanks Public Works. May God rest his soul and bring comfort to his family.
Don Fielder
July 28, 2021
I worked with Ronald in 1970 for the city of Fairbanks. He was a real nice person, a good worker and a good friend. My condolences to his family.
Charles Donahue
Work
June 28, 2021
Beatrice, We were sadden to hear of your dad's homegoing. We pray that the love of family and friends will help sustain and comfort you and the entire family during this time. We are praying for everyone.
Love to all.
Issac, Brenda, Irma & Tim Tolliver
Brenda Tolliver
Friend
June 17, 2021
Ron, my friend. Throughout the years you have been in my thoughts, usually accompanied with a smile. You will remain in my thoughts until we will meet again .... your friend Dave
David Lorentson
Friend
June 15, 2021
So sad to hear about Ron. I met him about 45 years ago in Fairbanks, Alaska. We both worked for City of Fairbanks, Public Works. We watched our families grow. We have remained friends all this time. God bless you all. Love and prayers
shirley Solomon
Work
June 15, 2021
Showing 1 - 5 of 5 results