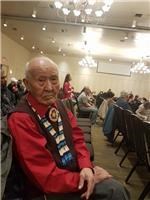 BORN
1924
DIED
2017
Simon Francis Sr., traditional chief of Fort Yukon, woodsman, trapper, river-boatman and craftsman extraordinaire, entered the gates of heaven June 10, 2017. He was a dad, uncle, grandpa, great-grandpa and friend. He was a most honorable and generous man, a trustworthy friend to all and a prominent bearer of Gwitch'in culture and tradition.
Simon was born to Bella and Adam Francis on Feb. 20, 1924, in Whitehorse, Canada. He was raised at Old Village (John Herbert's Village) and spent much of his life on the Porcupine River, which no one knew better than Simon. He had 13 brothers and one sister and was the last of his Canadian family.
On July 4, 1947, Simon married Bella Strom. It was a marriage arranged by their parents and probably heaven, too, because they remained close partners in their subsistence lifestyle, raising a family and through Bella's illness. They lived at Old Village for 11 years and had six children, Jose, Linda, Charles, Aleta, Simon Jr. and Thomas Gabriel.
Among Simon's great stories was how each spring he would load the 32-foot plank boat he had made up to the gunwales with the kids, their dog team, the winter's fur and provisions for hunting rats on the trip to Fort Yukon. There he would work, unloading steamboats, cutting wood and fighting fires until late summer when they would again journey upriver. That seasonal cycle continued until 1957, when they began staying in Fort Yukon so Josie could attend school.
In 1962, Simon brought the family to Canyon village. In 1967, they moved to Chalkyitsik, from which Simon and his sons traveled to Old Village for trapping. Later, Simon and Belle returned to Fort Yukon and then moved to Fairbanks so Belle could be near the hospital. As he became renowned for his subsistence skills, traditional knowledge and his snowshoe and sled making, he began spending more time teaching the young people. He taught about old ways and how they could serve the future. He also worked at the Riverboat Discovery for 15 years.
For a while, he and Belle served as Elders in Residence at the University of Alaska, teaching skills and cultural traditions. Over the years, Simon has helped and taught and influenced many people. He leaves a lasting legacy.
Simon was cared for by his loving daughter, Aleta, who was always by his side, to the end.
Simon is preceded in death by his loving wife, Bella; parents, 13 brothers, one sister, son Charles, daughter Linda Silas and grandsons, Adam B. Francis and Andrew John.
Simon is survived by his daughters, Aleta, and son-in-law Stan; and Josie John; and his sons, Simon Jr. and daughter-in-law Norma and Thomas Gabriel; his grandchildren, Henry, and his partner, Kim, and their four children, Joshua and his two children, Crystal, Chad, Johnny, Bonnie, Bobby and his three children, Roxanne and her four children, Charlie, Rosebud and her two children, Christopher, Kristin and her two children, Anita and her two children, Lysandra and her child, and Grafton and his four children.
Services will be held in Fairbanks and Fort Yukon. Visitation will be at 1 p.m. followed by services at 2 p.m. today at St. Matthew's Episcopal Church in Fairbanks.
Visitation will be at 1 p.m. followed by services at 2 p.m. Wednesday, June 14, at St. Stephen's Episcopal Church in Fort Yukon. Potlatch will be held at the Tribal Hall.
Please visit www.legacy.com/obituaries/newsminer to sign an online guest book.
Published by Daily News-Miner on Jun. 13, 2017.
To plant trees in memory, please visit the Sympathy Store.
MEMORIAL EVENTS
Jun
14
Visitation
1:00p.m.
AK
Jun
14
Service
2:00p.m.
St. Matthew's Episcopal Church in Fairbanks.
AK
MAKE A DONATION
MEMORIES & CONDOLENCES
5 Entries
There is nothing easy about coping with the death of a loved one . I hope God's loving words at John 6:40 will bring you comfort like it has for me .
Kiki
Kiki
June 14, 2017
He was a very good dancer & dressed nice. Rest In Peace, Simon. You will be missed by everyone. May your memories give you peace and comfort.
Margaret Craft
June 13, 2017
He was a very good jig dancer and always dressed nice. RIP Simon, you will be missed by many.
Margaret Craft
June 13, 2017
Condolences to all the family. A wonderful leader who will be very much missed. You are in my prayers.
Jenny Daalaii Bell
June 13, 2017
Condolences to the family... Simon will be missed. always puts out his hand to say Nanjit Doonchyaa...always busy, loading his boat up to go out on the river or with a loaded toboggan. such a hard worker up to the last of his strength.
Evelyn James
June 13, 2017
Showing 1 - 5 of 5 results