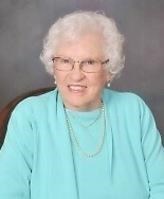 BORN
1928
DIED
2021
FUNERAL HOME
Salem Funerals & Cremations - Downtown
120 South Main Street
Winston-Salem, NC
Carolyn Anne Sharp Hale
October 1, 1928 - March 3, 2021
Winston-Salem, North Carolina - Carolyn Anne Sharp Hale was born on October 1, 1928 in Elizabethton, TN and died on March 3, 2020 in Winston-Salem, NC. She was educated at Ward-Belmont College (Belmont University) in Nashville, TN and East Tennessee State University in Johnson City, TN. Second only to her love for her family and friends, her passions for music, education, and gardening influenced the course of her life.
As an organist at St. Thomas Episcopal Church in Elizabethton, TN, she met her future husband the Reverend George Blodgett Stuart Hale and they were married at St. John's Episcopal Church in Johnson City, TN on September 5, 1947. After their marriage, Mrs. Hale began her lifelong career in education, teaching kindergarten at Grace-St. Luke's School in Memphis, TN while Fr. Hale served as a priest.
Fr. and Mrs. Hale moved to Raleigh, NC in 1956 and together they founded St. Timothy's School in September of 1958. St. Timothy's School was the first private day school in the state of North Carolina to be accredited both by the state of NC and by the Southern Association of Colleges and Schools. Mrs. Hale served as the first kindergarten teacher at St. Timothy's School and continued in that capacity for 18 years before becoming the Director of Admissions in 1978, a role she held until her retirement in 1993. After many years of rapid growth to the eleventh grade, Fr. and Mrs. Hale began the upper school on White Oak Road in Raleigh, NC. The parents petitioned the new high school to be named Fr. Hale High School, which remained its name until 2003. For St. Timothy's 45th anniversary in May of 2003, she and Fr. Hale were honored and awarded the Order of the Long Leaf Pine by the Governor of NC, given for extraordinary service to the state of North Carolina. Outside of her commitment to education, she also served on the Raleigh Community Hospital Board from December 1978 through December of 1983 and was the first president of the Evening Garden Club in Hidden Valley neighborhood. During her retirement, Mrs. Hale traveled the world with her husband and spent time with him creating a beautiful, meandering natural garden in the woods surrounding their home, filling it with spring flowers.
She is preceded in death by her husband, the Rev. George Blodgett Stuart Hale; by her parents, Dr. Luther Franklin Sharp and Mrs. Etta Rogers Sharp; and by her brother, Luther Franklin Sharp, Jr. She is survived by her daughter, Dr. Marcia Hale Russell and her husband, Dr. Wilson Glover Russell both of Winston-Salem, NC; by her two grandchildren, Virginia Wilson Russell of Dallas, TX and Stuart Hale Russell, his wife, Marley Finch Russell, and their children Stuart Hale Russell, Jr. and Helen Kathryn Russell, all of Winston-Salem, NC; as well as by many nieces and nephews. A private family memorial service will be held at St. Timothy's Episcopal Church in Raleigh, NC and her family invite you to remember Carolyn with them through her favorite hymns: I Sing a Song of the Saints of God, My Faith Looks Up to Thee, and The Church's One Foundation. The family requests that any donations in Carolyn's honor be given to St. Timothy's School at 4523 Six Forks Rd, Raleigh, NC, 27619 or a charity of your choice. Condolences may be made online at www.salemfh.com.

Published by The News & Observer on Mar. 7, 2021.
To plant trees in memory, please visit the Sympathy Store.
MEMORIAL EVENTS
To offer your sympathy during this difficult time, you can now have memorial trees planted in a National Forest in memory of your loved one.
Funeral services provided by:
Salem Funerals & Cremations - Downtown
MAKE A DONATION
Please consider a donation as requested by the family.
MEMORIES & CONDOLENCES
Sponsored by Salem Funerals & Cremations - Downtown.
2 Entries
The Sharp - Hale family has my deepest condolences for their loss of Carolyn. A sweet and loving women - and yes - I know that after meeting her but one time. My family went to visit Carolyn and George for the 1st time to meet them at their home. They were nephew and niece to my Grandmother , Mary Stuart Hale - Weyer. They invited us in and shared their home and their memories of "Mai". Then we had a lovely walk of the spectacular family gardens. It was a truly memorable visit and one that I reflect upon. As is the case so often nowadays, our rushed to the max lives and a whirlwind of competing priorities, it was not long enough and but one time. I am sorry for that. My heart and prayers go out to the Sharp - Hale family but, I am certain that the memories from Carolyn will warm and help guide you and be with you forever. Sincerely, Matthew
Matthew Hale Tittmann
April 5, 2021
I am one of the many students whose life Carolyn Hale enriched from kindergarten throughout grade school. I can picture her still with Father Hale on the St. Timothy´s campus and remember well her energy and her smile. Deepest sympathies to Mrs. Hale´s family and loved ones. May they find comfort that her memory lives in every student whose life she touched, and her legacy endures with every St. Timothy´s student to come.
Joe Diab
March 7, 2021
Showing 1 - 2 of 2 results