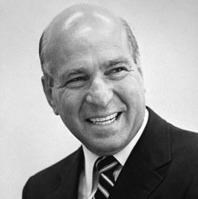 Charles "Charlie" L. Fulton peacefully died November 29, 2018, surrounded by the love of his family, colleagues, and numerous friends who so enriched Charlie's life—and to whom Charlie offered so much. Charlie was born in Franklin, NC, on December 11, 1927, to Marian and Mac Fulton. Life was hard in the mountains of Appalachia and became even more difficult when Charlie's father abandoned his young family. Charlie and his two brothers moved in with their grandparents, and although resources were scarce, education was emphasized, which launched Charlie on a lifelong love of learning.

From a young age, Charlie demonstrated a great aptitude for academic achievement. He enrolled in his beloved University of North Carolina-Chapel Hill at age 15 in 1943. After graduation with a BS in math and political science, Charlie continued his education in the law school at UNC, where he graduated second in his class in 1950.

Following law school, military service called. Charlie served as a Lieutenant in the US Navy from 1950–54, where he mentored many a young sailor. After his Navy career, Charlie moved to Raleigh, and together with Howard Manning, founded Manning & Fulton law firm, later to become Manning, Fulton & Skinner.

During his Navy career, Charlie befriended another officer, Tom Oates, and his wife Marilyn. After Tom was tragically killed in a military plane crash, Charlie fell in love with Marilyn, married her on June 29, 1958, and inherited an instant family, including four children and a dog. Four years later, Charlie and Marilyn lovingly welcomed their fifth child, David Charles.

Charlie was an influential leader in the legal community and was regarded as one of the state's leading authorities on real estate law until his retirement at age 80 in 2007. He was honored to serve as president of the North Carolina Bar Association from 1983-1984. Among his many accomplishments, he was particularly proud of his work to help create the North Carolina State Bar's Interest on Lawyer Trust Accounts program in 1984, which generates income from lawyers' trust accounts to fund programs for the public's benefit. He was also a strong advocate for mediation over litigation and pushed for a certification program for legal specialization in North Carolina. Charlie also rewrote the state's foreclosure law, which was enacted in 1974.

Despite his consuming law practice, Charlie still found time for hobbies, including racquetball, tennis, cribbage, and duplicate bridge. He served as a tennis umpire at the US Open, first at Forest Hills and then at Flushing Meadows, and was thrilled to accumulate 2,500 bridge masterpoints during his lifetime.

The family invites friends to remember Charlie in whatever way feels appropriate. If you wish to make a memorial donation, Charlie's favorite charities were the American Red Cross and the Raleigh Rescue Mission. A celebration of Charlie's life will be held at Grace Lutheran Church in Raleigh, NC, on December 15, 2:00 pm. Arrangements by Cremation Society of the Carolinas.
Published by The News and Observer on Dec. 9, 2018.
To plant trees in memory, please visit the Sympathy Store.
MEMORIAL EVENTS
Dec
15
Celebration of Life
2:00p.m.
Grace Lutheran Church
Raleigh, NC
Funeral services provided by:
Cremation Society of the Carolinas - Raleigh
MAKE A DONATION
MEMORIES & CONDOLENCES
Sponsored by Cremation Society of the Carolinas - Raleigh.
5 Entries
We just learned of Charlie's passing today and want you to know you are in our prayers. Love to you all.
Peggy & Jim MacDaid
December 16, 2018
Charlie did more to advance my career as a lawyer than any other person. I am but one of so many people , lawyers, clients, he profoundly served, helped, encouraged , advised, supported, and guided. Charlie's death marks the passing of an era of Legal Giants , the likes of which I pray we again might have. Accolades seem as mere cliches when attempting to describe him. As far as I am concerned, there never was anyone better than Charles Fulton.
John Hill Parker
December 15, 2018
My thoughts are with my favorite family as they mourn but celebrate a life well lived and a man well loved. susie Jones brady
Susie Brady
December 12, 2018
As someone who worked professionally with Charlie over many years,I always found him to be a true professional and, after he got used to "that lawyer from Atlanta", also a friend united in the best interests for our mutual client. I missed our interaction when he retired, but knew he well earned his retirement. May he rest in peace.

Elliott Cohen
Elliott Cohen
December 11, 2018
You are not alone during this time of sorrow and pain. May God give your family strength and comfort to help you endure this loss. As you remember your beloved little one, the God of peace will give you comfort and peace in every way. May you find Strength from the love and care that surrounds you and comfort in the memories that you shared. Please accept my sincere condolences. IS 41:10
kk
December 9, 2018
Showing 1 - 5 of 5 results