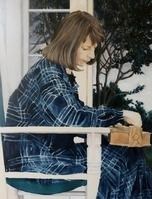 Dale Volberg Reed, 77, died peacefully, surrounded by her family, on Friday, October 19, at her home in Chapel Hill. She faced death with calm acceptance.

The daughter of Frank Marshall Volberg and Phyllis Roberts Volberg of Kingsport, Tennessee, she went to Duke University as an Angier B. Duke Scholar and studied piano with Lauren Withers. She subsequently received a master's degree from Harvard University and was graduated from the Westchester Conservatory of Music.

She married John Shelton Reed, also of Kingsport, in 1964. The Reeds moved to Chapel Hill in 1969 and lived there ever since, except for occasional years and semesters away in Jerusalem, London, Palo Alto, and elsewhere. They have two daughters, Elisabeth Marshall Reed, a musician in Oakland, California, and Sarah Greene Reed, an artist in Austin, Texas.

Dale Reed was a talented musician who taught piano privately for many years. She also played the guitar, mountain dulcimer, and harpsichord (she built her own), and she sang alto for 48 years in the choir of the Chapel of the Cross. With her husband, she wrote 1001 Things Everyone Should Know about the South and Holy Smoke, an award-winning book about North Carolina barbecue. She fearlessly attacked and mastered exotic recipes, watercolor painting, quilting, and handicrafts of all kinds.

In retirement she trained herself as a genealogist and photographer, and enjoyed cross-country blue-highway road trips to see her granddaughters. She also liked crossing the North Atlantic on the Queen Mary 2 and church-crawling in English villages.

She is survived by her husband and daughters, and also by sons-in-law Andrew Luchansky and Christopher Bean; granddaughters Leah Reed Luchansky and Lucinda (Luca) Bennett Bean; her brother Frank Marshall Volberg of Purcellville, Virginia; and her uncle Joseph Linton Roberts, of Lincolnton, Georgia.

There will be a Funeral Eucharist at the Chapel of the Cross in Chapel Hill at 10:00 a.m. on Saturday, November 10, followed by burial in the churchyard.

In lieu of flowers, donations may be made to support the music program at the Chapel of the Cross. (To donate online, go to thechapelofthecross.org, click "Sustaining Our Church," then "Make a One-Time Gift," then select "Memorials Fund," and note that the gift is in memory of Dale Reed.}
Published by The News and Observer & Herald Sun on Oct. 21, 2018.
To plant trees in memory, please visit the Sympathy Store.
MEMORIAL EVENTS
Nov
10
Funeral
10:00a.m.
Chapel of the Cross in Chapel Hill
NC
Funeral services provided by:
Cremation Society of the Carolinas - Raleigh
MAKE A DONATION
MEMORIES & CONDOLENCES
Sponsored by Cremation Society of the Carolinas - Raleigh.
12 Entries
I have nothing really new to add, except that I think of both Dale and John often as I watch the continuing transformation of The South in general, and Chapel Hill in particular. We are all on our way to a better regional and societal place, to which The Reeds have most assuredly enduringly contributed.
Fred Hall
October 30, 2021
Dear Shelton and Family,
I can't remember in what connection I met Shelton. Was it when I was Director of Academic Programs in the Reagan Administration and we were looking for outstanding individuals like him to be Fulbright scholars? Or was it through NEH? Whatever that fleeting occasion was, I recognized a superior individual and have "kept up" with him through the years by reading his and his wife's works. What an outstanding couple! How well suited and complementary to each other. I am sorry that Mrs. Reed is gone--at least from her earthly abode. Her knowledge and talent are cherished by her family, of course, but also by the many who admired her work.
Sincerely,
Jeanne J. Smoot
Professor Emerita
NC State University
Jeanne Smoot
Acquaintance
June 12, 2019
As the days and weeks pass, and as you return to life's routine, may you continue to feel comforted by the love and support of family and friends.
October 31, 2018
I was saddened to learn of Dale's passing from a mutual friend. On behalf of my wife LaWanda and myself, let me say that we will always treasure the memory of being graciously invited to dinner by John and Dale. The two of them epitomize the better things the South has to offer!
Fred Hall
October 31, 2018
Fred Hall
October 31, 2018
With the vast array of All Things Exquisite that your daughter, Elisabeth, travels the Earth with, I now see from your signature radiance where she got some of her earliest modeling. I am so very happy you were all able to find your way to each other for that last magnificent Aria together. With Love and exceeding Grace to you, your continued heart's journey and that of all your loved ones. It has been such a gift to read about your life, legacy and loves. Erika Ebbeson
ERIKA EBBESON
October 24, 2018
Our hearts and prayers to Dale and family. May she rest in that Peace which has created this world.
Mike and Cindy McCammon
October 22, 2018
Dear Friends,
Please do not send flowers. And if you'd like to leave a message for us, please go to https://www.caringbridge.org/visit/dalereed/ We will not be checking this site regularly.
Thank you for your concern and sympathy.
John
October 21, 2018
To the family of, Dale
Please accept my sincerest condolences. Know that the God of comfort feels your pain and sorrow. Isaiah 61:1,2.
MHS
October 21, 2018
I have many happy memories of Dale. She was wildly talented and funny, funny.
John, I am so sorry.
Tish Wimberly-Wolfe
Tish Wimberly-Wolfe
Friend
October 21, 2018
We are deeply saddened to learn of the passing of Dale Reed. Our condolences to John and her family. Karl & Rita Rodabaugh
October 21, 2018
My sincere condolences for your great loss. May the God who "binds up the brokenhearted " and "comforts all who mourn", sustain your family during this challenging time. Isaiah 61:1,2.
October 21, 2018
Showing 1 - 12 of 12 results