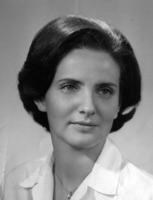 It is with profound sadness that her grieving family announce the death of their beloved mother and grandmother JoAnn Pizer-Fox.

During a period of great personal loss, Jewish tradition cites the famous ode attributed to King Solomon, "Eishet Chayil," which begins, "A woman of valor, who can find? For her worth is far above rubies."

Those who knew JoAnn will agree that these ancient words exemplify the woman she was-- a person of unfailing integrity and grace, who departed this life as she had lived it, peacefully and with loving family nearby.

Her life and generous spirit, always used in the service of others, are greatly valued, and her loss, an incalculable one for her many friends and family members, will be mourned for years to come.

Born November 5, 1930, in Chicago, Illinois, JoAnn was the third daughter and youngest child of Ella Goldman Kousnetz and Dr. Selig B. Kousnetz.

She attended von Steuben High School (Class of 1946), graduated from Northwestern University's Medill School of Journalism in 1950, and later studied graduate English Literature at the University of Chicago.

In 1951, she met and married Wilfred Halperin, a Chicago businessman and patron of the arts, with whom JoAnn spent many happy evenings in the halls of Chicago's resident theater and music companies. They lived in Europe for a few years and, upon returning to Chicago, in time became the parents of Carl (b. 1959) and Michele (b. 1960).

After Wilfred's untimely death in 1962, JoAnn was introduced, by a college friend living in Raleigh, NC, to a local pediatrician, Dr. Morton E. Pizer.

In 1966, she married him, moving south with her children to take up a stimulating new life, a happy union which produced William (b. 1968) and Ellen (b. 1973). Alongside her second husband, she quickly became integrated in the city of his birth, forging friendships in every walk of life and becoming a fixture in town.

They were indisputably a local "power couple," long before that expression entered popular culture, and they are highly regarded still, long after Morton's death in 1989.

Not long after, JoAnn renewed acquaintance with Stanley H. Fox of Oxford, NC, a man who had also recently lost his spouse of many years, and in 1992, they married.

She and Stan had 27 joyous years

together, traveling and enjoying their blended family, and ultimately relocating to the Cypress of Raleigh, where Stan passed away in 2019.

JoAnn's interests were varied and sustained her throughout times of both great happiness and great sorrow. As a child in Chicago, she began studying the piano, a lifelong pursuit, and her children will always remember her playing of the music of Mozart, Chopin, Kuhlau, and Clementi throughout their formative years.

She wrote classical music criticism for the News and Observer during the 1970s, and remained a life-long supporter of the arts, attending local performances as was her custom from her earliest days in Chicago.

Making like-minded friends, she joined women's arts groups, including MusArts in Chicago and, later, as a longtime member of Raleigh Fine Arts, she often judged the group's yearly literary competitions.

JoAnn was an avid needlepointer, miniature enthusiast, and dedicated tennis player. She served a term as president of Beth Meyer Synagogue's Sisterhood, where she proved invaluable in the commissioning of art works to enhance the beauty of the building and its sanctuary.

Her faith was central to her identity as a cherished 54-year member of the Beth Meyer Synagogue family. Her presence at religious events there was marked with grateful deference in thanks for her many contributions to Raleigh's Jewish life. Once inside, she was always to be found seated in the same spot, known to synagogue members young and old, many of whom made a point of stopping there, greeting her warmly.

As a former member of the Board of Trustees of the North Carolina Museum of Art, she was a founding co-chair of the Friends of the Judaic Art Gallery, the museum's permanent installation of Jewish ceremonial art objects, one of only two such collections in the nation.

Along with her late husband, Stan Fox, JoAnn was presented with the state of North Carolina's highest civilian honor -- membership in the Order of the Long Leaf Pine -- awarded by Governor Bev Perdue in 2012.

JoAnn reveled in her book club meetings, going to the movies, volunteering her time for local charities, and enjoying long, competitive games of Scrabble with her children, all of whom, in her later years, received the priceless gift of time to know their mother as both friend and confidante.

Possessed of a true zest for life, a great sense of humor along with an infectious laugh, JoAnn had an abiding love of people: once you were her friend, you were a friend for life. She rarely failed to remember a birthday or an anniversary with a card, a gift, or a call.

As children, their mother taught JoAnn and her sisters to care for and to accept others as they are, and to face life's adversities with resolve and, above all, with humor whenever possible. JoAnn never forgot this sage advice, imparting it to her own children.

This is who JoAnn Pizer-Fox was: a shining jewel whose value proved priceless to all who were fortunate enough to know her.

As important as her friendships were, her most loving devotion was, however, reserved for her large extended family.

JoAnn also leaves behind 27 devoted nieces and nephews, great-grandchildren from her third marriage, several first cousins, and her dearly-loved sister, Marian K. Kaufman, of Skokie, IL. She was predeceased by her sister, Carol K. Sterkin, of Northridge, CA.

JoAnn's grateful children wish to thank their mother's kind and dedicated caretakers, Rosa Herrera and Dulcina Assumane, along with Marita and Alicia from the Cypress of Raleigh. Additional heartfelt thanks are extended to Dr. Alan Kritz and to Lisa Ginsburg of Transitions Lifecare for their loving compassion.

Private burial at Raleigh Hebrew Cemetery will be followed by a public Celebration of Life service at a later date.

Condolences for the family along with memories of JoAnn may be shared at www.BrownWynneEastMillbrook.com

MAY JOANN'S MEMORY BE FOR A BLESSING!

Published by The News and Observer on Sep. 6, 2020.
To plant trees in memory, please visit the Sympathy Store.
MEMORIAL EVENTS
To offer your sympathy during this difficult time, you can now have memorial trees planted in a National Forest in memory of your loved one.
Funeral services provided by:
Brown-Wynne Funeral Home
MAKE A DONATION
MEMORIES & CONDOLENCES
Sponsored by Brown-Wynne Funeral Home.
1 Entry
JoAnn was a long-time great friend of my parents, and she was there for them at difficult times and at celebratory times. Sincere condolences.
Barbara Ruby, Greensboro, NC
Barbara Ruby
September 7, 2020
Showing 1 - 1 of 1 results