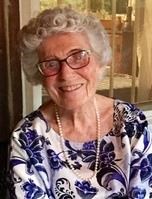 June Skinner (Cowperthwaite, Stanley) Peacock passed quietly and peacefully in the early morning hours of August 12, 2019, in the loving care of Transitions Hospice Home and surrounded by family.

June was born in NYC on June 16, 1921. Her life was filled with constant reflections on poetry, written by herself and others, which brought her the strength to carry on through the many life challenges she was called to meet with a vigor that reflected her character.

Her mother, Helen Peocock Skinner, died from Diphtheria when June was a child of 10. Her father, Robert Black Skinner, raised her and her brother, James Skinner, who was a year her senior.

June graduated from the University of Michigan with a degree in Social Work. During WWII she married William Gardner Cowperthwaite, who later earned a Ph.D. in Horticulture and was the father of Bob, Steve, and Ann Cowperthwaite. Bill was killed in an airplane accident in 1964 when the children were 15, 14 and 11 years old. Four months after his death, she packed the family of four and set off on an 11,000 mile camping trip (self-pity was not her style) around the U.S.

Returning from this trip, June began her professional life working at the University of Florida as a hostess to dignitaries visiting the university, while also developing the thriving University of Florida Cicerones, a student ambassador organization that just this past year celebrated their 50th anniversary and is ranked the #1 student ambassador club in the country.

Once this was accomplished, June was solicited by Merrill Lynch to be trained as a stockbroker, as they needed a "mature female" in the all-male ranks. Passing all stockbroker exams for certification, she focused her attentions on educating women in the field of finance. Some years later she became a C.F.P.

She was a member of P.E.O. and one of the first female Vestry members at Holy Trinity Episcopal Church in Gainesville.

In 1972, June married D. K. "Dutch" Stanley, Dean of the Athletic Department at the University of Florida. Dutch was instrumental in helping to build June's home in the mountains of Western North Carolina, in between their many travels abroad. Dutch died of cancer in 1983.

In 1990 June married the Rev. Heber Peacock, this being her last and longest marriage, lasting until his death in 2010.

June became an accomplished basket-weaver, oil painter, and finally, a writer, self-publishing her beautiful memoir, "Window in the Wall" which she began at the age of 89, and completed 2 years later.

In addition to her children, her loving family includes a son-in-law, two daughters-in-law, 9 grandchildren, and 6 great-grandchildren. There will be a reception at Christ Episcopal Church, Raleigh beginning at 1:00 pm on Saturday, August 24, 2019, followed by the funeral service at 2:00 pm.

As "Gram" goes to her Great Reward (as she and her family light-heartedly refer to death) we close this last chapter of her life with the words with which she closed her book, in response to the question, "What will you hope your last words will be?" June's answer was, "Thank You."
Published by The News and Observer on Aug. 16, 2019.
To plant trees in memory, please visit the Sympathy Store.
MEMORIAL EVENTS
Aug
24
Visitation
1:00p.m. - 2:00p.m.
Christ Episcopal Church
Raleigh, NC
Aug
24
Funeral service
2:00p.m.
Christ Episcopal Church
Raleigh, NC
Funeral services provided by:
Hall-Wynne Funeral Service & Crematory
MAKE A DONATION
MEMORIES & CONDOLENCES
Sponsored by Hall-Wynne Funeral Service & Crematory.
3 Entries
What a dear-heart who will sorely be missed. Her legacy is an inspiration. I'm grateful for her daughter Ann, a living angel in my life. Thank you, June, for your many gifts to this world!
Dana
August 19, 2019
My deepest condolences to Bob, Steve and Ann on the loss of your Mother. I will always be gratefully to your Mother for inviting me to spend time with the family on the Skinner Farm and will always remember the croquet games and the fun times we had on the farm.
Ron Speicher
August 17, 2019
I was fortunate enough to meet June and spend almost a year getting to know her. She was one of the sweetest souls I have ever had the pleasure of knowing. She was truly a blessing to me. Most of all, I will miss her positive attitude and beautiful smile.
Sharon Keeter
August 16, 2019
Showing 1 - 3 of 3 results