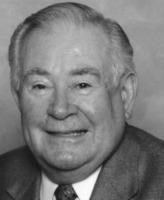 BORN
1928
DIED
2021
FUNERAL HOME
Brown-Wynne Funeral Home
1701 East Millbrook Road
Raleigh, NC
Richard "Dick" Leo Quinlan
September 3, 1928 - October 10, 2021
Raleigh, North Carolina - On Sunday October 10, 2021, Richard Leo "Dick" Quinlan passed away at the age of 93. Dick was born on September 3, 1928 in Rantoul, Illinois to Raymond and Kathleen (Brown) Quinlan. Dick graduated from the University of Illinois Urbana-Champagne in 1950 with a BS in Management & Marketing. Following college, Dick enlisted in the Army Corps of Engineers and was stationed in California and Oregon. After serving his country he returned to Illinois and began his career with International Harvester touring the country as a part of the Farmall Show team. He married Eunice Marie Perszyk in 1955, and they became the loving parents of three sons, Michael, Richard, and Timothy. Dick's career with International Harvester took his family to live all over the world, including South Africa, England, Belgium, the Philippines, France, and finally Raleigh, North Carolina in 1981. In 1985 Case took over International Harvester and Dick retired from its Agricultural division. Not one to sit at home Dick continued his career with the North Carolina Equipment Association and then as the Director of International Trade for the North Carolina Department of Commerce, from which he retired in 1994. Following Eunice's death in 1997, Dick married Pamela Strauss in 2000 and she remained his loving wife until his death. Dick was a devoted parishioner of Saint Raphael Catholic Church in Raleigh, where he volunteered for several years in service of the columbarium. In his retirement, Dick enjoyed frequent golf with his friends and the simple joys of being at home with his family and beloved dogs Papi and Paddy. Dick was preceded in death by his brothers Joe and Terry, his wife Eunice, and his sons Timothy and Michael. He is survived by his wife Pamela of Raleigh, son Richard and wife Barbara Oslund of Pittsboro, daughters-in-law Susan Augenstein and Debra Quinlan, and his two grandchildren Adah Pearl and Oliver Leo Quinlan.
A funeral mass will be held on Tuesday, October 19, 2021 at 12:30 at St. Raphael Catholic Church, 5801 Falls of Neuse Rd., Raleigh, NC. Flowers are welcome, or you may wish to make a donation in Dick's honor to a charity of your choice.
Arrangements are held with Brown-Wynne Funeral Home, 1701 E. Millbrook Rd. Raleigh, NC 27609