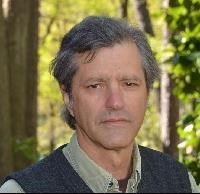 Steven Bennett Wing, 64, died from cancer on November 9, 2016 surrounded by his family in his home in rural Chatham County. He was born in New Orleans, LA where he grew up with his parents, Lucie Lee Wing and Cliff Wing, both deceased, and his brother, Scott Wing, currently of Arlington, VA. The family moved to Durham when Steve was 12 and North Carolina became his permanent home.

Steve met his wife, Betsy, in 1975 while they were undergraduates at Vassar College in New York. A year later Steve returned to NC with Betsy where they made Chatham County their home. There they built a house and raised two daughters, Ann and Marion. Ann, her husband Sam Garrett, and twins Loa and Miles live close by; Marion lives in Durham.

Steve was a man of many talents and was admired by and an inspiration to all who knew him in one or more of his roles as a friend, musician, mentor, academic and community activist.

He was an associate professor of epidemiology at UNC's School of Public Health where he had been a member of the faculty since 1985. Steve was recognized locally, nationally and internationally, first for his early work in occupational health and later for his work in environmental justice. In the many tributes made to Steve before his death, repeated references were made to his passionate advocacy for social justice and tenacity in the face of injustice. He was revered by students, colleagues and community members alike for leading by example and demonstrating unwavering respect, integrity and courage.

Steve was also a talented musician. His passion for music began as a young child, both by watching traditional jazz funeral marches in his neighborhood in New Orleans and growing up in a home with a mother who played piano and composed music. For decades he played keyboard with various bands in the triangle area and continued to do so until a few weeks before his death.

The place where Steve was most at peace was at home in the woods with his family. He enjoyed living a life that reflected his love of nature and appreciation for living simply. He spent many hours walking in the woods around the family home, was a conscientious steward of the land, and always looked forward to clear fall days when he would cut and split wood in anticipation of cold winter nights sitting by an open fire. Steve enjoyed preparing and sharing food with others, especially meals cooked in his home-built cooking shack. You could often find him on the weekends grilling fresh food from the farmer's market and enjoying music in the company of friends and family.

Steve Wing was a strong, just and kind man whose humility and dedication touched all those who knew him. An event celebrating Steve's life will be announced at a later date.

In lieu of flowers, donations can be made in Steve's name to the North Carolina Environmental Justice Network, P.O. Box 68, Rocky Mount, NC 27802 or at http://www.ncejn.org/.
Published by The News and Observer on Nov. 13, 2016.
To plant trees in memory, please visit the Sympathy Store.
MEMORIAL EVENTS
To offer your sympathy during this difficult time, you can now have memorial trees planted in a National Forest in memory of your loved one.
MAKE A DONATION
MEMORIES & CONDOLENCES
21 Entries
Steve,

You are still deeply missed but you are still inspiring public health advocates. I am at the American Public Health Association conference this week and your leadership is spoken of.

- Rob
Robert Hale
Coworker
November 3, 2019
Even in illness, Prof Wing generously shared insight and truth while demonstrating courageous strength to those like me who sought his guidance while battling a harmful practice. I do not know his friends or family, but promise my prayers for you all. I never met Prof Wing in person, but he was available for my calls and questions as I sought self-education. I will be forever grateful to his selfless sharing of knowledge.
Sludge Victims
December 13, 2016
Steve Wing simply was one of the finest people I have ever met. His courage in tackling issues of serious environmental and health concern was unparalleled. These often involved facing off against opponents with far greater economic and political resources. Despite this, Steve always took the high road, even when it was an extraordinarily difficult path. He was a calm, but firm force in turbulent situations. You could always rely on him. He applied the best science, with the highest of motivations, despite the costs.

I was honored to call Steve my friend and colleague. While regrettably too short, I am extremely grateful for the time I spent with him. Steve was a beacon of light in an all too often bleak landscape. He is sorely missed.

Rob Hale, Professor Virginia Institute of Marine Science, College of William & Mary
Rob Hale
December 2, 2016
Very tough to hear. I attended Vassar with Steve. Though we were not close I enjoyed his friendship and playing music with him. He was unique, artistic and multi dimensional. Way too young to be lost.
Mark McKenna
November 21, 2016
Steve was a courageous and decent man who cared about all people, but especially those victimized by industrial animal agriculture. There are not many people like him and he will be sorely missed.
Bob Martin
November 18, 2016
Very sad...We only have excellent memories of dear Steve! A very nice human being!
Angela Branco
November 17, 2016
I am so saddened by the loss of this quiet spoken and ever giving gracious man! He was a saving grace for so many! Respect and condolences to his family for he loved you all dearly!! Thank you too for allowing him to share his great kindness and love for others!
Mary Carwile
November 15, 2016
My sincere condolences and sympathies to his family. I recall Marion talking about his work and his impressive experiences working on social justice issues and environmental conditions. I know that his memory and integrity will live on in his children and spirit.
Jennifer Lipton
November 14, 2016
goto 3m27s

https://www.youtube.com/watch?v=EmJcHrjtJSU
Mike holland
Friend
November 14, 2016
I'm so saddened to hear of Steve's passing. He was a great guy. We played music together back in the 80's. We once played with Eddie Van Halen at the Radisson in Raleigh!!! Steve always had a smile for you and was a real pleasure to be around. My condolences to his family and friends. Steve, you wont be forgotten-
Ben Seawell
November 14, 2016
Steve was a true champion for justice and used his expertise and knowledge to advance environmental justice policy. I was saddened to hear of his passing.
Lisa Finaldi
November 14, 2016
I am deeply saddened to learn of Steve's passing. I knew him, his brother, mother and father during the years I lived in Durham. My deepest condolences to Betsy and the entire family.
-Carol Sloane
-Boston
Carol Sloane
November 13, 2016
This year the world lost Steve Wing. Last year we lost Marilyn H. Snipes, board president for the West End Revitalization Association (WERA) in Mebane, NC. We are blessed that both shared their hands, Hearts, and minds with so many to make their lives better. The pain of missing Steve and Marilyn will and still renew our purpose.
Omega and Brenda of WERA Wilson
November 13, 2016
So sorry to hear about Steven. I know his memories will last forever in all your hearts. May the words at Psalms 116:15.
November 13, 2016
I'm here this week in N Carolina doing the good work you taught me so much about. I know that's exactly what you'd want me to do under the circumstances and I'll do my level best. My vey best to Betsy, Ann, and Marion and family. Thinking of you all every mile I trek.

Kendall Thu
November 12, 2016
Steve was a courageous researcher in the face of constant criticism from people who want radiation to cause no harm because that will help nuclear power flourish. There aren't a lot more like him still living.
John Miller
Acquaintance
November 11, 2016
Steve and Betsy were such friendly neighbors and I regret we didn't do more things together while Steve was here with us. Know that we are praying for you all during this time. Tanya and Lex
Tanya and Lex Alvord
Neighbor
November 11, 2016
I only knew him for a brief time, but Steve was such a beacon for joy, especially when he was playing piano. I wish peace for his warm, wonderful family.
Sarah Davis
Acquaintance
November 11, 2016
I greatly appreciate Steve's work on public health & the environment. We'll miss him.
Bill Holman
Friend
November 10, 2016
Showing 1 - 21 of 21 results