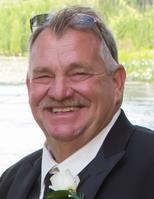 FUNERAL HOME
Cornell Memorial Home Inc
247 White St
Danbury, CT
Daniel F. Falls
Daniel F. Falls, 64, of New Milford, beloved husband of Betty (Page) Falls, who was his soul mate and true love, passed away at 1:15 a.m., Thursday, August 24, 2017, due to injuries as a result of a motorcycle accident. Danny was born on June 2, 1953, in Danbury, son of Frank Falls of Bethel and the late Dolores Falls. He was a graduate of Bethel High School, where he also played football.
After working with his father for a few years he decided it was time to expand his father's and grandfather's business and in that came F & D Falls Excavating Co, which was Incorporated in 1981. The operation turned into a successful business. Six years ago he started a home heating oil company known as Falls Fuel LLC. He volunteered as a coach for the Bethel Pop Warner football league during his son's childhood and never missed one of his son's Pop Warner or high school games. Danny loved the ocean and would enjoy nothing more than being on a boat. His motto was work hard and play hard, and that's what he did. Danny loved the New York Giants and Yankees. His other favorite sport goes hand in hand with his love of country music and that was Nascar. He attended the Dayton 500 on several occasions. Throughout his younger years he had the classics, a 70 Chevelle & 1957 Chevy, and a few others. Danny loved to joke around others. He was a tough guy but had such a big heart. He was always thinking of others, and would do anything for anyone. He enjoyed spending time with his family and friends. He loved his dog Balou and Betty's dog Wiley. Danny became a grandfather on May 11, 2016 and that was a very special day for him as he was so proud of his son. Another special day for him was the day he was married to his wife Betty. On August 16, 2014 they were married in Antigua and had an amazing time as they were so happy. When Danny and Betty could manage to get away they would often visit Cape Cod and Florida where they shared many memories together, as well as with other family and friends. Danny will be missed and never forgotten as the ocean will never be the same without him.
In addition to his wife, Betty, and his father, Frank, he will be sadly missed by his son, Christopher Falls and wife Kimberley; his granddaughter, Mya Falls; three sisters, Nancy Falls DeSocio, Doreen Vanvalkenburgh and husband Paul, Donna Ferrante and husband Orlando; four stepchildren, Adrienne, Chris, Bill & Kevin Wakeman; six nephews, Brandon & Ryan DeSocio, Orlando, Dillion, Zach & Austin Ferrante.
A Mass of Christian Burial will be celebrated on Friday, September 1 at 11:00 a.m. at the Church of St. Mary, 26 Dodgingtown Road, Bethel. Burial will follow in St. Mary Cemetery. Calling hours will be Thursday, Aug. 31, from 3 p.m. to 7 p.m. at the Church of St. Mary.
In lieu of flowers, contributions in memory of Danny may be made toward Betty's continued care and support during her rehabilitation, either directly to the family or through https://www.gofundme.com/Danny-BettyMedicalFund
To read more about Danny's life or to leave a condolence please visit www.CornellMemorial.com.

To plant trees in memory, please visit our Sympathy Store.
Published by Danbury News Times on Aug. 30, 2017.
MEMORIAL EVENTS
No memorial events are currently scheduled.
To offer your sympathy during this difficult time, you can now have memorial trees planted in a National Forest in memory of your loved one.
Funeral services provided by:
Cornell Memorial Home Inc
MEMORIES & CONDOLENCES
56 Entries
Danny was a great friend at Bethel High School. We played football and baseball together. Danny was a very talented athlete, especially as a football player. He was always upbeat and friendly. Saw him about seven years ago in New Fairfield. He was the same old friendly guy with a big smile. So sorry to lose him so young. My sincere condolences to his family.
Walter Keenan
Friend
October 3, 2017
I am so sorry to hear of Danny's passing. I just made a donation to the medical fund after checking in to see how Danny and Betty were. Now I just read the obituary. Danny did several projects for me and was a always fair, honest, hard working, and extremely helpful and enthusiastic on a wide array of jobs. He had a joyous approach to life and we both enjoyed chewing the fat when the opportunity arose. My prayers for Betty and Chris and the entire Falls family.
Wayne Jervis
Friend
September 22, 2017
Danny you were one nicest Bosses I have ever had taught me alot you will be missed Peace be with your wife and Frank so sorry Rest in Peace
Michael Ferrer
September 10, 2017
We are so sorry to hear of Danny's passing. Our prayer go out to the entire family.
Fred and Lisa Calogero
September 7, 2017
My prayers for the entire Falls family. May the Lord be your greatest source of comfort during this time. May you remember to celebrate his life rather than mourning his all to sudden departure. Nancy reminded me of that. He was really a great guy and it's easy to recall his hearty laughter; it was contagious! I will continue to pray for all of you.
Kathleen Carley Smith
September 7, 2017
Dear Betty, Adrienne, and family,
We are so sorry for your loss. You are always in our hearts and prayers. Rest in peace, Danny.
Lisa and Craig Pease
September 2, 2017
May you rest in peace.
gina potenziani
September 2, 2017
I remembered Danny as a kind and gentle soul from my High School years and growing up in Bethel. He was so proud of that Chevelle. May he rest in peace. Prayers for his wife's recovery. Nancy Scalzo McNeill
Nancy McNeill
September 1, 2017
Sorry for the loss of a great guy rsp
Robinsin
Friend
September 1, 2017
Frank, Doreen and Paul, and all the Falls families;
We were shocked and saddened to hear of Dan's passing. So sorry for your loss.
Darry & Barb Spain
September 1, 2017
Chris - I am so sorry for your loss. May your memories bring a smile to your face during this difficult time..
jan maria Jagush
August 31, 2017
Not knowing that wou one that-ld be my last conversation w/Dan 4 days before the accident - it was an awesome conversation - one that I'll never forget ... Thank you Dan and Family for the memories...
TAmmy Zinick
August 31, 2017
Our deepest sympathy and condolences to Betty Falls and family. Although we didn't have the pleasure of knowing him longer, his friendship will be sincerely missed. With all of our love and prayers.
Joe Flamini
August 31, 2017
Much love and tight hugs to the entire Falls and extended family! May Danny's angel wings carry him to heights he would never have imagined!
Jan Poklemba Johnsen
August 31, 2017
We are so sorry to hear of Danny's passing. Our condolences and prayers go to the entire Falls family. May he rest in peace.
Chrsitine Bonansinga
Friend
August 31, 2017
God bless you , rest in peace my friend ❤
Joann Matos
August 31, 2017
I am so sorry for your loss. My thoughts and prayers are with the family.
Joni Montesi-Stankaitis
August 31, 2017
I am sorry for the lost of your dear love one. May the God of peace and comfort be with the family at this most difficult time. 2 Corinthains 1:3,4.