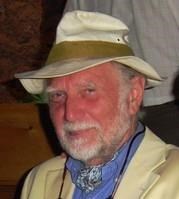 BORN
1936
DIED
2021
FUNERAL HOME
Honan Funeral Home
58 Main Street
Newtown, CT
David Egee
David Egee 1936 – 2021
David Egee of London England and Southbury CT passed away peacefully on May 30th, 2021 at The Danbury Regional Hospice after a short illness.
David was born in Bridgeport, CT, on December 26th, 1936, son of Dr. Benton and Gladys Egee. David grew up in Newtown, attending Newtown schools until leaving home for Rumsey Hall, The Loomis School and graduating from the Wooster School in Danbury, CT. David graduated from Boston University. He then worked with the International Red Cross in Alaska, eventually receiving a graduate degree from Columbia University.
Soon afterward David reconnected with, and married the love of his life, Dale Richardson. They were married in 1967 and enjoyed an amazing life together for almost 50 years, until her death in 2017. David and Dale's life was something out of a movie. While pursuing their careers in hospital administration and art, they lived in Lebanon, Libya, Rome, Dubai, eventually settling in London with summers in their beloved Chateau de Olmet in the south of France. This amazing life was shared with a group of friends, assembled over many years from near and far. No gathering was too small for David to turn it into a real event.
David's career as a hospital administrator for the Hospital Corporation of America, owner of DaleCare Nursing Homes and business director of ASN were important to him, but his life was truly lived through his adventures, family, friends and outside interests. David worked on a dairy farm as a youngster. As an adult he negotiated with Yasser Arafat, escaped the civil war in Beruit, learned to fly, became a jockey and raced horses, rode a unicycle, ran a jazz club, wrote his autobiography and most recently drove his 1929 Model A Ford from Massachusetts to California.
David spent much of his life overcoming obstacles, including a number of near fatal diseases and learning disabilities. He lived by the motto "wake up running", so none of these problems slowed him down for long. David's was truly a "life well lived". Even at his death, his calendar was filled for months to come. A more detailed story of David's life is available in his book "Wake Up Running".
In addition to his parents and his wife, David was predeceased by his brother John Egee. He is survived by his siblings Elaine Pratt, Leslie Woolery and Paul Egee, as well as his children Corinna Lewis, Adam Lewis, Tony Lewis and Eliza Dash Egee. He is also survived by 3 grandchildren, along with many nieces and nephews.
A private burial will take place at the family's convenience. Honan Funeral Home, Newtown is serving the family. To leave an online condolence, visit www.honanfh.com

Published by Danbury News Times on Jun. 1, 2021.
To plant trees in memory, please visit the Sympathy Store.
MEMORIAL EVENTS
To offer your sympathy during this difficult time, you can now have memorial trees planted in a National Forest in memory of your loved one.
Funeral services provided by:
Honan Funeral Home
MAKE A DONATION
MEMORIES & CONDOLENCES
Sponsored by Honan Funeral Home.
1 Entry
So sorry to hear of David's passing. A lovely man and a life well lived. My daughter Sharon was a Matron at Dalecare Newbury.
Mary Keast
Other
July 9, 2021
Showing 1 - 1 of 1 results