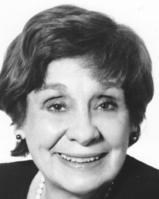 FUNERAL HOME
Jowdy-Kane Funeral Home Inc
9 Granville Ave
Danbury, CT
Bennett, Myril Axelrod
Myril Axelrod Bennett, a former Danbury resident , helped break barriers for women on Madison Avenue and popularize the use of focus groups in advertising, died early Tuesday at her home in Newton, MA. She was 93. The cause of death was heart failure, according to the family.
Mrs. Axelrod, as she was professionally known, was a staff reporter for the New York City daily PM in the 1940s, an era when few women worked in America's newsrooms. After the paper and a short-lived successor folded, she continued writing on a free-lance basis for a variety of national publications.
But it was her second career in advertising, during the Mad Men era of the 1960s, where Mrs. Axelrod made a particular name for herself, helping build the qualitative research departments at two firms and becoming one of the first female vice presidents at advertising colossus Young & Rubicam.
Bringing a journalist's ear and interpretative skills to Madison Avenue, Mrs. Axelrod's probing research helped clients understand the whims, desires, and experiences of their customers; her research informed creative work on products as varied as hair spray and automobiles, and shaped campaigns for iconic brands such as Jell-O, Birds Eye, and Maxwell House.
Mrs. Axelrod retired from Y & R in 1983, but later conducted pioneering research on behalf of the senior housing industry. Her central finding, that today's seniors and aging Baby Boomers preferred to be closer to family than move to sunnier climes, helped reorient where builders developed retirement communities.
Born April 4, 1920, in Weehawken, N.J., Myril Jessica Davidson grew up in nearby Jersey City, the second of three children born to Louis and Gertrude Davidson. Her father, who fled the Russian pogroms as a teenager, became a dentist with a Hoboken practice that counted a young Frank Sinatra as a patient. Her mother, the child of immigrants, was a teacher and homemaker.
Following older brother Bill, a noted writer, into the journalism program at New York University, Ms. Davidson won the department's David James Burrell Prize for outstanding student work, and served as editor of the NYU newspaper. After stints at a trade publication and a weekly newspaper, she set journalism aside at 22 to follow her first husband, psychologist Joseph Axelrod, while he served stateside with the US Army. They married in 1943, and she worked with doctors and psychologists in the Army Air Corps writing surveys of mental health work in Army hospitals.
After the war, Mrs. Axelrod reentered journalism on the staff of PM, the liberal-leaning, advertising-free daily financed by Marshall Field III. Starting as an assistant, she worked as a "leg man" for Albert Deutsch, the journalist and social historian, on PM's science and welfare coverage. Mrs. Axelrod also helped I.F. Stone prepare his work "Underground to Palestine," a landmark account of the efforts of Jewish "displaced persons" in Europe to reach what was then British Mandatory Palestine after World War II. Mr. Stone's book began as a series in PM.
At a time when women in newsrooms were often relegated to society coverage, Mrs. Axelrod rose to City Desk reporter, writing about labor, law enforcement, and breaking news, with a stint covering education. After PM folded in 1948, she stayed on with its successor, the New York Star, before spending most of the 1950s freelancing pieces for national magazines.
Her 1955 Reader's Digest story "Our Starving Children" - about the nutritional woes plaguing a nation of teenagers filling up on junk food- was reprinted in leaflet form and again in a Reader's Digest book about health.
Pivoting to advertising, Mrs. Axelrod began freelancing for Maxon and other firms before joining Compton Advertising in 1958, supervising what was then known as "depth research," an emerging tool on Madison Avenue. In 1966, she joined Y&R, initially as assistant director for qualitative research, rising to vice president in 1973.
In a piece on "Mad Men" for The Boston Globe in 2010, Mrs. Axelrod wrote that the characters in the AMC drama were crueler than the friends she cherished from her agency days, the sex, cigarette smoking, and drinking all amplified. But the struggle for women to be recognized was real, and she wrote of colleagues who were locked into stereotypical secretarial roles or passed over for promotions to creative positions, despite their talents.
But as a qualitative specialist, Mrs. Axelrod felt her real battle was not gender discrimination. "I was committed to selling the importance of an emotional message to agency executives used to viewing everything in terms of numbers," she wrote. "My contributions in exploring and interpreting what our products meant in consumers' lives helped me become an executive. My boss believed in what I had to sell. I was uniquely fortunate."
Divorced in 1968, Mrs. Axelrod in 1970 married Abner Bennett, a marketing executive. Together, they restored a quirky 18th-century weekend home in Danbury, filling it with antiques from across the decades, Shaker rocking chairs, Victorian lamps, someone else's ancestral oil painting; an icebox served as a liquor cabinet. Mr. Bennett died in 1986.
Mrs. Axelrod lived the last six as a resident of the Lasell Village independent living community in Newton, MA. While there, and into her 90s, Mrs. Axelrod wrote popular profiles of her neighbors for the Boston Globe website.
Mrs. Axelrod is survived by a son, David, of Chicago, the former senior adviser to President Obama; a daughter, Joan, of Arlington MA, an educational consultant; and five grandchildren.
Funeral services were held at 11 a.m. Thursday in the Jowdy-Kane Funeral Home, 9-11 Granville Avenue, Danbury with Rabbi Vivian Mayer officiating.
Burial followed in United Jewish Center Cemetery, Brookfield.
Contributions in Myril Axelrod Bennett's memory may be made to CURE, a non-profit research organization, 430 West Eerie, Suite 210, Chicago, IL 60654 or www.cureepilepsy.org and click the "get involved" tab and then the donate tab.

To plant trees in memory, please visit our Sympathy Store.
Published by Danbury News Times from Jan. 22 to Jan. 24, 2014.
MEMORIAL EVENTS
No memorial events are currently scheduled.
To offer your sympathy during this difficult time, you can now have memorial trees planted in a National Forest in memory of your loved one.
Funeral services provided by:
Jowdy-Kane Funeral Home Inc
MAKE A DONATION
MEMORIES & CONDOLENCES
4 Entries
Myril,Our dear and long loving friend for more then 60 years will always be in our hearts and lovingly remembered. Condolences to Joan and David and their families.
Charles Miller
January 23, 2014
My late husband, Dr. Philip Fenster and I were long time friends of Myril;s. Her warmth and charm will be missed by all who knew her. My sincere condolences to her family.
Ruth Fenster
January 22, 2014
Condolences to the Axelrod and Bennett families. Myril was a friend of my parents Ruth and my late father Dr. Philip Fenster. I loved the historic home that she used to own with Abner. Myril was a very classy lady who will be missed by those who knew her. Mike Fenster and Family
Mike Fenster
January 22, 2014
Condolences to Myril's family. My parents, Leonard and Marion Burkat, were great friends of Myril's before their deaths. I am sorry to read this.
Caroline Burkat Hall
January 22, 2014
Showing 1 - 4 of 4 results