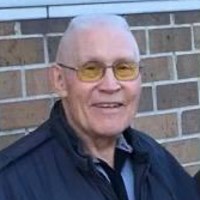 BORN
1937
DIED
2021
FUNERAL HOME
Beil-Didier Funeral Home - Clintonville
299 S. Main Street
Clintonville, WI
Eugene "Gene" Bassetti
Born: June 24, 1937 in Oglesby, IL
Died: November 21, 2021 in Clintonville, WI
Eugene "Gene" Bassetti, age 84 of Menasha, Wisconsin, passed away Sunday, November 21, 2021, at Greentree Heath & Rehabilitation Center, Clintonville, WI.
Eugene Louis Bassetti was born on June 24, 1937 in Oglesby, Illinois, to Louis and Marie (Caletti) Bassetti. He grew up in Oglesby and graduated from LaSalle-Peru Township High School in LaSalle. Gene went on to the local community college and then to Kansas State University. He was always super athletic in several sports but was an All-American on the football team from 1958-1959.
Gene was united in marriage on September 2, 1962, to Esther Liss in LaSalle, Illinois, and the couple were blessed with two children. He was a heavy equipment operator for over 20 years at Illinois Cement Company in LaSalle, retiring in 2000. Gene moved north to Wisconsin because he was an avid outdoorsman who enjoyed fishing and hunting.
Survivors include one daughter, Theresa (Norm) Stiefel of Fort Collins, CO; one grandson, Austin (Samantha) Stewart of LaSalle; and his former wife, Esther Bassetti of Peru. He is further survived by a brother, Donald (Mary Ann) Bassetti of Spring Valley, IL; and nieces, nephews, other relatives and friends.
Gene was preceded in death by his parents; a daughter, Christine Bassetti; and one brother, Mario (Dorothy) Bassetti.
A Gathering for Family and Friends will be held at a later date. Beil-Didier Funeral Home, Clintonville, is assisting with the arrangements. Please go to www.beil-didier.com to sign the online guestbook or to send a card.
Published by News Tribune from Nov. 23 to Nov. 24, 2021.
To plant trees in memory, please visit the Sympathy Store.
MEMORIAL EVENTS
To offer your sympathy during this difficult time, you can now have memorial trees planted in a National Forest in memory of your loved one.
Funeral services provided by:
Beil-Didier Funeral Home - Clintonville
MAKE A DONATION
MEMORIES & CONDOLENCES
Sponsored by Beil-Didier Funeral Home - Clintonville.
1 Entry
I am very sorry for you and extend my condolences. A football story- As a kid at 10 years old who loved football, getting to the LP football practice field after school was a very high priority. Many late afternoons were spent there watching the LP and LPO Jr. College football teams practice. Great fun. Learned a few things about football and learned names and positions of many of the players. "Angus" Geno Bassetti was very memorable. Saw a lot of the JC home games-
one of which was played in a hellacious snowstorm and seeing Angus run over the opposition was a cool thing. I remember him at practice and games and the fun all those guys were having- could not wait for my turn. His nickname was great- read an article in the local paper about him being named a JC All American. Somewhere I saw a picture or model of a small black Angus honoring Gene- not sure where- maybe the paper- maybe the trophy case at the school- can't remember for sure. I looked up to him and admired his football skills. Read about him going to Kansas State. Lost track but wondered a bit about him. Football was instilled and later became a football coach who was definitely influenced by the many hours having fun watching him and those teams back in 1956-7-8. Found Genes name on the list of All Americans on the NJCAA website 4 days ago. Super memories here. John Reardon
John Reardon
Acquaintance
December 3, 2021
Showing 1 - 1 of 1 results