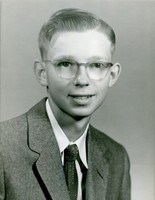 BORN
1942
DIED
2021
FUNERAL HOME
Hurst Funeral Home - Tonica
103 E Elm St
Tonica, IL
Kenneth Ray Alleman
Born: June 18, 1942 in Tonica, IL
Died: October 11, 2021 in Park Ridge, IL
Kenneth Ray Alleman, age 79, of Tonica, passed away Monday, October 11, 2021 at Sunrise Assisted Living of Park Ridge.
A Christian graveside service will be held 11:00 AM Saturday, October 16 at Fairview Cemetery in Tonica. The Hurst Funeral Home in Tonica is assisting the family with arrangements.
Kenneth was born June 18, 1942, the youngest son of Roy Senior and Leona (Wolfe) Alleman in Tonica. He graduated from Tonica High School and continued his education at Iowa State University graduating with a bachelor's degree in landscape architecture and horticulture. Kenneth spent a majority of his professional life designing landscapes for area homeowners and local businesses as part of the family owned Tonica Nurseries. With the passing of his parents, he took over the responsibility of the Tonica Nurseries until his retirement.
He truly enjoyed preparing designs, working late into the night while listening to classical music. As a landscape architect, his designs were planted throughout the local area where they are still enjoyed today. He taught landscaping design at IVCC and donated trees that are planted around the campus. He was very fond of Ginkgo trees and often used them in his designs.
He loved to played the clarinet in college and marched alongside his father in local parades as a young man. He greatly enjoyed giving his nieces and nephews a ride in his 1967 corvette convertible and going to movies with them.
He was a devoted son to his parents Roy and Leona Alleman and was the primary caretaker of his older sister Virginia (Chuck) Jones. His parents, sister and brothers have all proceeded him in death. Ken's brothers were John (Theresa) Alleman, Donald (Joan) Alleman, and Roy Alleman.
He is survived by many nieces and nephew, Sue (John) Buntrock, Barbara (Don) Mathieu, Bill Alleman, Laurie (Reto) Weber, Linda Alleman, Cindy (Chris) Snyder. We will always remember the good times we spent with him and as our cool uncle.
In lieu of flowers, memorials can be directed to Alzheimer's research.
Online condolences may be viewed and remembrances shared at www.hurstfuneralhomes.com.
Published by News Tribune from Oct. 12 to Oct. 13, 2021.
To plant trees in memory, please visit the Sympathy Store.
MEMORIAL EVENTS
Oct
16
Graveside service
11:00a.m.
Fairview Cemetery, Tonica
Funeral services provided by:
Hurst Funeral Home - Tonica
MAKE A DONATION
MEMORIES & CONDOLENCES
Sponsored by Hurst Funeral Home - Tonica.
1 Entry
What a knowledgable person Kenny was. We always purchased our plants and trees from his place of business. He was always kind and helpful. You just knew that he loved what he did. Condolences to the family.
Betty Lou Willand
October 14, 2021
Showing 1 - 1 of 1 results