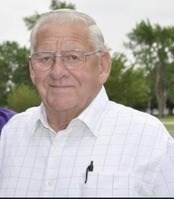 BORN
1935
DIED
2021
FUNERAL HOME
Merritt Funeral Home
800 Monroe Street
Mendota, IL
Richard Bettner
Born: June 21, 1935 in Waterman, IL
Died: September 8, 2021 in Tavares, FL
Richard Harold Bettner, 86 of Salt Springs, Florida and formerly of Paw Paw passed away September 8, 2021 at Advent Health Waterman Hospital, Tavares, Florida.
Funeral services will be Saturday, September 18, 2021 at 11:00 a.m. at Immanuel Lutheran Church, Compton with Rev. Jeff Schlesinger officiating. Burial will be in the church cemetery with military honors by Mendota VFW Post 4079. Visitation will be Friday from 5-7 p.m. in the Merritt Funeral Home, Mendota.
Richard (Dick) Bettner was born in Waterman on June 21, 1935 to Harold and Minnie (Hampton) Bettner. He married Mary Engelhardt December 8, 1956 at Immanuel Lutheran Church.
He served in the United States Army, where he was a Duck Mechanic and received the Expert Marksman honor. After his time in the military, he was a deputy for the Lee County Sheriff's Department and police officer for the Village of Paw Paw. In the 1970's, he helped start what was the Ambulance Service in Princeton and served as an EMT. He farmed, owned and operated Bettner Tiling and Paw Paw Realty for many years. Richard and Mary made their home in Paw Paw where they raised 5 children. He was always willing to help anyone in need, even if he didn't know them. His humor was not for the faint of heart, but to his family it was one of his best qualities. He was a firearms enthusiast and enjoyed wildlife in the Ocala Forest, including seeing the bears in his yard. He could frequently be found with his dog Minnie by his side, whether at home or driving around town.
He was preceded in death by his parents, son David, wife Mary 2010, brother Bill, and sister Delores Mershon.
He is survived by his children, Dwight of North Carolina, Doug (Tina) of Silver Springs, FL, Duane of Salt Springs, FL, Dawn (Jason) Foster of Paw Paw, Mike Rauh of Salt Springs, FL, Jeffrey of Colorado and Jake of Illinois. Grandchildren, Wendy Kay of Sycamore, Justin Bettner and Jennifer Bettner both of Odum, GA, Samantha Niehaus of Silver Springs, FL, Danielle Abbey of Ocala, FL, Kaitlyn Broughton of Loves Park, Kristyn Bettner of Princeton, Tylar Foster of Petersburg, Taryn Foster of Nashville, GA and Trysta Foster of Russellville, AR. Great grandchildren, Elizabeth Lampson, Nikita Hardesty, Natasha Hardesty, Tucker Bettner, Cooper Bettner, Grayson Bettner, Raina Lou Niehaus, Sirus Niehaus, Emberlyn Abbey, Keira Hollenback and Jonah Barnes and his sister Sandra Beardin of Arizona.
Memorials will be to the donor's choice. Online condolences may be left at www.merrittfh.com

Published by News Tribune from Sep. 14 to Sep. 15, 2021.
To plant trees in memory, please visit the Sympathy Store.
MEMORIAL EVENTS
Sep
17
Visitation
5:00p.m. - 7:00p.m.
Merritt Funeral Home
800 Monroe Street, Mendota, IL
Sep
18
Funeral service
11:00a.m.
Immanuel Lutheran Church
Compton , IL
Sep
18
Burial
Immanuel Lutheran Church Cemetery
Compton , IL
Funeral services provided by:
Merritt Funeral Home
MAKE A DONATION
MEMORIES & CONDOLENCES
Sponsored by Merritt Funeral Home.
5 Entries
Lots of hugs and prayers to the family
Rhonda. Bettner Gross
Family
September 17, 2021
So sorry to hear of the loss of your dad and grandfather. He was certainly a character! I know how much you loved him! May your memories comfort you in the days ahead.
april kaiser
Friend
September 15, 2021
May your hearts soon be filled with wonderful memories of joyful times together as you celebrate a life well lived.
John Jay Collier
Friend
September 14, 2021
My deepest condolences for your loss.
John(Jay) Collier
Friend
September 14, 2021
Thinking of you and your family. I have so many wonderful memories of your dad and him teasing me. Such a great man!
Sue Beetenshaw
Friend
September 14, 2021
Showing 1 - 5 of 5 results