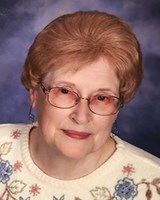 BORN
1928
DIED
2021
FUNERAL HOME
Dysart-Cofoid Funeral Chapel
208 S Mccoy
Granville, IL
Shirley Mae Hawthorne Barnes
Born: October 5, 1928
Died: September 8, 2021
Shirley Mae Barnes, aged 92, of Granville, IL died Wednesday, September 08, 2021, at St. Margaret's Hospital, Peru, due to complications after suffering a severe heart attack.
Shirley Mae Hawthorne was born on October 5, 1928, the younger daughter of Olive Susan Wood and Edward Everett Hawthorne of Granville. She attended Granville public schools graduating from Hopkins Township High School in 1946. After high school, she worked as a switchboard operator for the Granville Telephone Co. until her marriage. She married James Thomas Barnes of rural Granville on January 16, 1949. After a Southern California honeymoon, they lived on the family farm south of Standard where they raised their two children, James and Sue. They were divorced after 38 years of marriage. She never remarried. In 1962, she started working part-time for her father, publisher of the Putnam County Record, as a composer/proofreader and continued there until 1976 when he retired and the business was sold. Beginning in 1989, she worked at Anderson Microfilm Co. of Granville until 2003. During this time, she also worked evenings for three years for H. & R. Block in La Salle-Peru as a tax preparer and checker. She built a new home in Granville and moved from the farm in 1994 where she spent the rest of her life.
Shirley Mae was a lifelong, faithful member of the Granville United Church of Christ, formerly known as First Congregational. She served on several boards and committees and was a member of the adult choir. Shirley Mae was a charter member of Psi Omega, a young women's club in Granville, and was active through all the years of its existence. Gardening and sewing were her avocations. At the farm, she had a large plot in vegetables and tomatoes, freezing and canning all summer long. As a seamstress, she made most of hers and her daughter's clothes including tailored outfits. She would work well into the wee small hours of the morning listening to Franklin MacCormick on WGN radio as she sewed.
She is survived by her children, James Edward Barnes and Priscilla Sue (Trent) Tevis, both of Granville; her grandchildren, Ethan Michael (Julie) Tevis of Bloomington, IL and Cheryl Lynn (Dustin) Olson of Littleton, CO; her great-grandchildren, Lily Mae Tevis, Irandira Lynn Olson, Maria Angelica Olson, Clara Maria Olson, and Adaleigh Ember Olson. She is also survived by her nieces, Penelope Engelbrecht and Heidi (Jerry) Sobkowiak, both of Granville.
She was preceded in death by her parents, her husband, and her sister, Helen Marie Engelbrecht.
Arrangements have been made through the Dysart-Cofoid Funeral Home of Granville (www.dcfunerals.com). Visitation was Friday, Sept. 10, 2021 at the funeral home. Funeral services will be at the Granville United Church of Christ at 11:00 AM on Saturday, Sept. 11, 2021, with the Rev. Dr. Ron McNeill officiating. Pallbearers will be Ethan Tevis, Jerry Sobkowiak, Kirk Hawthorne, Ed Ferrari, Ron Salsman, and Rob Struthers.
Memorial gifts may be given to the Granville United Church of Christ or the donor's choice.
Published by News Tribune from Sep. 9 to Sep. 11, 2021.
To plant trees in memory, please visit the Sympathy Store.
MEMORIAL EVENTS
To offer your sympathy during this difficult time, you can now have memorial trees planted in a National Forest in memory of your loved one.
Funeral services provided by:
Dysart-Cofoid Funeral Chapel
MAKE A DONATION
MEMORIES & CONDOLENCES
Sponsored by Dysart-Cofoid Funeral Chapel.
0 Entries
Be the first to post a memory or condolences.