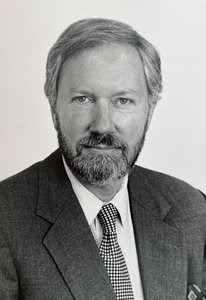 Born in Evanston, Illinois, in 1936 to Eunice Campbell Rhett (Emery) and Haskell Smith Rhett, he grew up in Long Beach, Indiana, and attended The Governor's Academy in Massachusetts on a full scholarship. He earned a BA in English at Hamilton College.

Upon graduation, he served as a Naval Flight Officer, flying A-3's off of the USS Forrestal. In 1961, he married his first wife, Roberta Teel Oliver, with whom he had two children, Kathryn Emery Rhett and Cecily Coffin Rhett.

After his naval service, Dr. Rhett was Assistant Dean of Admissions for Hamilton College before earning his Ph.D. in philosophy at Cornell University, and as a fellow at the London Institute for Education. In 1970 he became Director of Program Development at the Educational Testing Service in Princeton, New Jersey. A champion of equitable education for all, in 1973 he became Assistant Chancellor of Higher Education for the State of New Jersey, and then, in 1985, Vice President for the College Board. In 1990, he assumed the role of President of the Woodrow Wilson National Fellowship Foundation.

A trustee of The Governor's Academy and Dominican University of California, he also served as chair of the board of trustees of The College of New Jersey. He was on the board of directors for the Trenton After School Program, and a facilitator for the nation's longest-running career transition group, JobSeekers. He held fellowships at Harvard University's Kennedy School of Government and the Eliot-Winant Fellowship to lecture at British universities.

Dr. Rhett was an avid sailor, crewing on the Newport Bermuda Race, and a competitive tennis player. A longtime member of Trinity Church, in Princeton, New Jersey, he served as senior warden and three-time vestryman.

While in New Jersey, he met his beloved wife of the past 25 years, Janet Lee Rollings. Devoted supporters of the U.S. Olympic Rowing Team, they housed athletes and coaches in their home during training at Princeton's Carnegie Lake. Their love of nature, and Janet's work as a United Airlines captain, led them to live in Virginia's Blue Ridge Mountains, near Dulles International Airport. They traveled the world together, including Antarctica.

A memorial service and celebration of Haskell's life will be held later this year at Trinity Church in Princeton. In lieu of flowers, it was Haskell's wish for donations to The Governor's Academy or Trinity Church.
Published by The News Virginian on Jan. 14, 2022.
To plant trees in memory, please visit the Sympathy Store.
MEMORIAL EVENTS
To offer your sympathy during this difficult time, you can now have memorial trees planted in a National Forest in memory of your loved one.
MAKE A DONATION
MEMORIES & CONDOLENCES
Sponsored by Kathryn Rhett.
1 Entry
So sorry for your loss of such an incredible man of many achievements. I enjoyed knowing him as well as Janet while I was his care giver several years ago
Sharon Proffitt
Work
January 14, 2022
Showing 1 - 1 of 1 results