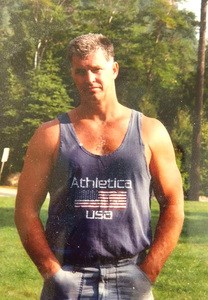 Jeff was born in Framingham, Massachusetts to Richard L. Shaw and Constance R. (Johnson) Shaw on April 16, 1960, and grew up in both Cape Cod, Massachusetts and Lebanon, Maine. After college, on May 15, 1983, he married his high school sweetheart, Kimberly Ballard Shaw, in White Hall, Virginia. Together, Jeff and Kim set about the creation of their family-owned business, their beautiful family of six, and their lifetime of love.

Jeff was preceded in death by his father, Richard L. Shaw.

A private celebration of life with family and friends will be held.

Throughout his childhood and adolescent years, he learned many skills from his father, which ignited his passion for a lifetime of woodworking and building. From crafting furniture to constructing homes, he was a creator. He and his wife opened their family business, Kimco for the Home, in 1982.

Jeff loved to be on the go, whether he was hitchhiking in his teens, traveling for business, hiking the Appalachian trail, or vacationing with family, and life was always an adventure to him. He was a simple man, and found much happiness when he engaged with the innocence and simplicity of nature and its wildlife.

Jeff was a strong believer in the healing qualities of the ocean, the cleansing air of the New England Mountains, and embracing the connection we have with nature by getting away from material things. He took pride in his family as he watched their skills develop, their imagination at work, their knowledge expand, and their own families grow. Jeff was firm in his belief that the strongest family is the one that works as a team and never grows distant in either physical or emotional senses. He believed in togetherness.

Although he gratefully indulged in time with his family, friends, and the simple things in life; he was the hardest worker you'd ever meet. Through the nights, days, weekends, and pains of his later health conditions, he fought through it all to be the best provider and protector for his family. In his eyes, nothing mattered more than ensuring the best life for those around him. With the biggest heart of all, it almost seemed as if it was his sole purpose in life to support and help other people in any way he could. His intentions were always pure, selfless, and nurturing.

If you knew Jeff, you would know that he was quick with a joke, always on your side when you're down, had the answer to every question you asked, and was quick to stop in his tracks if you needed him. No matter who he was surrounded by, they got the one and only version of Jeff. Although he was a man of few endearing words, we could all see that his actions always expressed his sentiments. He firmly believed and lived by the phrase, "actions speak louder than words," and proved that every day. As these amazing qualities are some of the most outstanding to us, we hope that they are the same for you as you remember Jeff.

He will be with us every day and we will miss him beyond measure...

In lieu of flowers, the family requests donations be made to St. Jude Children's Research Hospital, or plant a tree in his memory.

Arrangements have been entrusted to Charlton and Groome Funeral Home and Crematory.

Share a memory and condolences by visiting www.charltonandgroomefuneralhome.com.
Published by The News Virginian on Sep. 19, 2021.
To plant trees in memory, please visit the Sympathy Store.
MEMORIAL EVENTS
To offer your sympathy during this difficult time, you can now have memorial trees planted in a National Forest in memory of your loved one.
Funeral services provided by:
Charlton & Groome Funeral Home & Crematory Inc
MAKE A DONATION
Please consider a donation as requested by the family.
MEMORIES & CONDOLENCES
Sponsored by Charlton & Groome Funeral Home & Crematory Inc.
0 Entries
Be the first to post a memory or condolences.