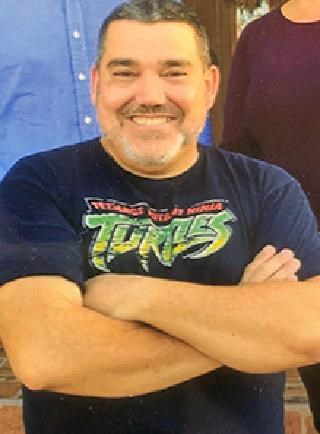 ABOUT
Clewiston High School
FUNERAL HOME
Akin-Davis Funeral Home - Clewiston
438 E. Sugarland Hwy.
Clewiston, FL
Roberto A. Silva Jr.
Roberto A. Silva Jr. was born in Pinar Del Rio, Cuba on September 14, 1962. Roberto came to Clewiston when he was 4 years old, accompanied by his parents and his brother Rolando. His sister Carmen would be born 4 years later. Roberto was Cuban by birth and American by choice. Roberto was proud of his heritage but never had the desire to return to a communist country. The family had a good life in Clewiston until an accident at work would eventually paralyze his father leading Roberto to help take care of him from a young age. Roberto graduated from Clewiston High School in 1982 and was given a scholarship to Carnegie Mellon for art school however, due to family obligations he was not able to attend. His father passed away the year before and he was needed at home. Not attending art school was always one of his biggest regrets. Just a few short years later he went to work for Bell's Radio Shack and working there became one of his greatest loves. He enjoyed managing Bell's and came to an understanding of music like no other. Anyone looking for a certain song or album knew if they came to see Roberto, he had it or would get it for them. He eventually met the love of his life, Darenda, went he went to work for Royal's Furniture store. They were married in Las Vegas in 1998. He worked in banking over 20 years, where he worked in the areas of management, loans, collections, and eventually as vice president of the loan dept. Roberto loved working with people, loved his job and worked until he became disabled. His coworkers loved him through this time, and he worked as a teller just a few hours a week to give him something to do. Roberto was an avid collector, artistic, loving, funny, a joker, and just a big kid at heart. If he was your friend, you were friends for life. He was an avid fan of the Miami Hurricanes and the Pittsburgh Steelers. Roberto attended Glades Bible Church and prospered greatly over the last year under the guidance of his Pastor David Royal.
He is survived by his wife, Darenda of nearly 23 years; his daughter, Miranda; his son, Kevin (Brandy); and one of his greatest joys in life, Conner, his grandson, Caleb Redish grandson, and Carlie Redish granddaughter. He is survived by his brother, Rolando Silva (Lisa); his sister, Carmen Whitehead (Tim); brothers and sisters-in-laws, Les McMillan (Rachel), and Mary Beth Rodriguez (Santiago); and his nieces and nephews whom he always loved as if they were his own, Michael Silva, Christina Torres (Timothy), Angelina Whitehead, Christian Whitehead, Adrianna Whitehead, Heidi Ward (Kendrick) and Kayla Rodriguez. He is also survived by his cousin, Sergio Rubio (Suzi); his godson, Carlos (Nani), Alex (Natasha), Alexis, and Natalie; and by his loving fur babies, Kiki, and Mama. Roberto wass preceded in death by his parents, Roberto and Carmen Silva; his loving aunt, Daisy (Yeye); and his little cousin, Sergio.
Celebration of Roberto's Life will be held at 10 a.m. today, Wednesday, August 18, 2021 at Glades Bible Church located at 705 S. Olympia Street, Clewiston, Florida. Visitation was Tuesday, August 17, 2021 from 6-8 p.m. at Akin-Davis Funeral Home in Clewiston. Burial will take place in Ridgelawn Cemetery.
Arrangements by Akin-Davis Funeral Home - Clewiston.

Published by Lake Okeechobee News and SouthCentralLife.com on Aug. 18, 2021.
To plant trees in memory, please visit the Sympathy Store.
MEMORIAL EVENTS
To offer your sympathy during this difficult time, you can now have memorial trees planted in a National Forest in memory of your loved one.
Funeral services provided by:
Akin-Davis Funeral Home - Clewiston
MAKE A DONATION
MEMORIES & CONDOLENCES
3 Entries
One of many fond memory, was at our church youth group trip to Fish Eating Creek. There were two teams and each team were in a canoe. The team that rowed to the finish line first was the winner. Martica was at the front of the canoe, me in the middle, and Robert in the back. They were in charge of paddling. The race began and we were in the lead. For whatever reason Martica pulled her ore out of the water and all of the sudden the canoe capsized . We all hit the water. Martica and Robert being older than me were concerned for my safety. They weren't sure if I could swim, and were shocked at how fast I swam to shore. Mind you, prior to the race, Robert had said that there were big Alligators lurking in the creek and for me to be careful. I was terrified about the alligators but didn't express my fears. When it was all said and done, all we could do was laugh. Then Robert asked me why did I swim so fast. I said, "you told me there were big Alligators...so I had to swim fast! I didn't want be eaten. To my surprise, he laughed even louder with tears in his eyes and said, "Ester, I was just joking"! You believed me? I said, "Yes"!! Me being the younger of the two and obviously very gullible. Years later, we still laughed about it. Our brother in Christ, you will be truly missed. May your hearts soon be filled with wonderful memories of joyful times together as you celebrate a life well lived.
Ester Rodriguez and Maria Suarez
August 18, 2021
Honey. We are so sorry for your lost. Best neighbor ever. Praying for and your family in this time of sorrow.
Tom and Claire
August 17, 2021
Sending Hugs and Prayers to the Silva Family. May you be comforted during this difficult time.
Diane Smith (Carhart)
August 16, 2021
Showing 1 - 3 of 3 results