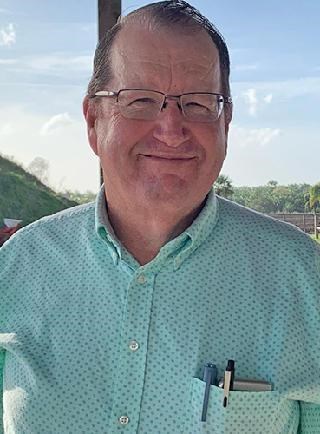 BORN
1965
DIED
2021
FUNERAL HOME
Akin-Davis Funeral Home - Clewiston
438 E. Sugarland Hwy.
Clewiston, FL
Roger Keith Tatum
Roger Keith Tatum went to his Heavenly home September 25, 2021 in Loxahatchee, Florida. He was born November 10, 1965 in Clewiston, Florida, to the late Lamar and Darlene Tatum. Roger remained a life-long resident of Clewiston where he worked for Hendry County as a heavy equipment operator for 31 years.
Roger was dedicated to his Lord, his family, his church and his community. He attended Clewiston Church of God where he served faithfully and donated his time and talents. Roger was quite the grill-master and cooked many a Boston Butt through the years. He also participated in mission trips to Guatemala where he helped construct houses of worship and ministered to those in need. He enjoyed traveling with family and was famous for his Chicken and Dumplings.
Roger will be missed by all of his extended family and friends. Survivors include his Aunts: Bernice Davis of Pelham, GA, Peggy McGahee of Jensen Beach, FL, Barbara and Bonnie Knowles of Clewiston, Lenora Knowles of Clewiston, and a Great Aunt, Edna Tatum of Pelham, GA; and Uncles: Leroy Thompson of Louisville, KY and Keith Knowles (wife Nancy) of Tellico Plains, TN; as well as, numerous cousins. Roger was preceded in death by his Brother, Ronnie Tatum; Aunts, Lanelle Tatum Kirk Thompson and Judy Tatum Gibson; and Uncles, Donald Kirk and Richard Knowles.
Roger's Celebration of Life will be held Tuesday, October 5th at the Church of God in Clewiston with Pastors Daniel Fairbanks and Joshua Caraway officiating.
Interment will be in Ridgelawn Cemetery in Clewiston. Visitation will be held at the church at 1:00 p.m., with the service following at 2:00 p.m.
Arrangements were made by Akin-Davis Funeral Home in Clewiston.

Published by Lake Okeechobee News and SouthCentralLife.com on Sep. 29, 2021.
To plant trees in memory, please visit the Sympathy Store.
MEMORIAL EVENTS
Oct
5
Visitation
1:00p.m.
Church of God in Clewiston
FL
Oct
5
Service
2:00p.m.
Church of God in Clewiston
FL
Funeral services provided by:
Akin-Davis Funeral Home - Clewiston
MAKE A DONATION
MEMORIES & CONDOLENCES
4 Entries
May your hearts soon be filled with wonderful memories of joyful times together as you celebrate a life well lived.
John m Patacco
Family
November 11, 2021
I will miss you! Fly high
Alexia Miller
October 1, 2021
I am so sorry to hear of Roger's passing and knowing how much he'll be missed at church and around town. But knowing how much he loved The Lord, I know he'll be in a much better place.
Pj Stevens
Friend
October 1, 2021
We were so sorry to hear of Roger's passing. We are sending our sincere condolences to his family and friends. RIP Roger. Thank you for all the Pecans!!
Jim & Cindy Graham
October 1, 2021
Showing 1 - 4 of 4 results