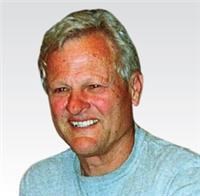 BORN
1940
DIED
2021
Ronald James Rusconi was born at Saint Agnes Hospital in Fresno, California.
The second of two sons, he was raised in San Joaquin, California by his mother, Anna Marie Giuliano, and
father, Atillio Rusconi. His mother was one of nine children born to immigrants from Foggia, Italy who
had moved to Fresno from the Chicago area of Illinois. Ron's father, Atillio had immigrated with his family
from the Italian-speaking part of Switzerland, Brione,
(Verzasca) a municipality in the district of Locarno
in the canton of Ticino.
The Rusconi family sailed from Le Harve, France on the La Lorraine and arrived in
America on January 2, 1912. Ron was proud of his Swiss-Italian roots. When he was 43, he traveled to
Locarno, Switzerland and connected with many of his Swiss-Italian family members.
Ron and his brother Phillip both attended San Joaquin Elementary School and Tranquility High School.
At an early age, Ron became interested in California history, sparked by the discoveries he made of American Indian
artifacts in the fields near his home. This began a lifelong passion which he often shared with school children during
special events in Fresno and Central Coast schools. He also had a deep interest in rocks and gems and was an active member of
the local Santa Lucia Rockhound organization.
After high school, Ron spent some time working in trucking and retail for Herb Bauer Sporting Goods in Fresno and Visalia,
California. He
loved to be active and played on volleyball teams on nights and weekends while he resided in Fresno and continued to actively
play on teams after moving to San Luis Obispo in 1985. He enjoyed winning in tournaments and
making great friends. Ron opened Rusconi's Pool Service in the late 1980's which he ran until his death. He considered his
clients
his friends, many had been in his life for more than 30 years.
Ron's love of the outdoors led him regularly to the activities of hiking, fishing, and hunting. One of his
favorite weekly activities was fishing on a friend's lake.
Ron made friends wherever he went and was extremely funny. Most of his friends describe him as being a unique character,
which is so true. His impressions of Larry the Cable Guy
and Bill Clinton were spot on. He loved dancing and listening to Marven Gay, Earth Wind and Fire, Etta
James, and George Benson. Ron had a healthy appetite and a love of sweets and fruit. He often
frequented the San Luis Obispo weekly farmer's market, visiting his favorite venders and bringing home
the "best" this-or-that to gobble up. Ron could down much of a chocolate cake or pie in one sitting, and simply worked
off the calories the next day while working or hiking. Ron always had a garden growing with plenty of
Swiss chard that he would harvest for dinners with his freshly caught fish. Ron loved to talk about
current events and politics, he was a frequent caller to the local Dave Congalton's Hometown radio talk show.

Ron's life was taken as a result of an automobile accident on January 24, 2020, while fishing and exploring near Tulare Lake,
California.

Although Ron did not leave a traditional family, he is survived by a large circle including relatives and friends whom he
considered his family. He is survived by his daughter, Dyana Hesson (Randy) and granddaughter, Sydney Hesson of Mesa,
Arizona. Nephews, Darren, Todd and Dylan Rusconi and sister-in-law Lorraine Rusconi, of Fresno, Susan Sullivan Rusconi,
Nicki Giuliano and Donna Rusconi. His best friend/fiance, Linda Billey, adopted niece, Bonita Sevedge both of Santa Maria,
California, artifact and rockhound buddy, Jason Martines, Paso Robles, California and lifelong friends, Kristie and Ernie
Dalidio, Los Osos, California.

A memorial service will be held in 2021 at the Monastery of the Risen Christ, San Luis Obispo, California.
In lieu of flowers, contributions can be made in his name to the Monastery of the Risen Christ or the Santa Lucia Rockhound
College Scholarship Fund.
Published by New Times San Luis Opisbo from Jan. 7 to Jan. 8, 2021.
To plant trees in memory, please visit the Sympathy Store.
MEMORIAL EVENTS
To offer your sympathy during this difficult time, you can now have memorial trees planted in a National Forest in memory of your loved one.
MAKE A DONATION
Please consider a donation as requested by the family.
MEMORIES & CONDOLENCES
0 Entries
Be the first to post a memory or condolences.