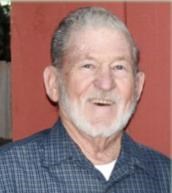 BORN
1932
DIED
2021
Sammy was born in Hollis, Oklahoma to Lola and Sam Maxwell. He had humble beginnings; it was the Great Depression and, following The Dust Bowl, his family soon left their native Oklahoma for California in search of work and a better life - his parents, eight siblings, and three of his sister's children all packed into a 1929 Model A Ford pickup truck and one other vehicle.

His father found work in the oil fields of Bakersfield, CA. It was there, where he grew up, that he fell in love with Kern County. He attended Kern County Union High School, which at the time had five thousand students and was the only high school within a 50-mile radius.

At the start of the Korean War, he enlisted in the Air Force, proudly serving his country for four years as a vehicle and equipment mechanic, quickly rising to the rank of Staff Sergeant before being honorably discharged.

A man of deep faith, he enrolled in the seminary in Little Rock, Arkansas where he would go on to pastor churches in neighboring towns for the next five years before earning his Masters in Biblical Language – both Greek and Hebrew. He then established a mission to serve non-English speaking immigrants in Corpus Christi, TX.

He would later return to California where he would become a successful general contractor and build his own houses in his beloved towns of Tehachapi, CA and Bend, Oregon. In his retirement, he would travel between Oregon, California, and Texas, in his fifth-wheel, driving cross-country as he so loved to do.

Sammy loved his family deeply, and he made friends everywhere he went. His sense of humor, good nature, big smile, and even bigger heart will be remembered by all who knew him. He never ceased to inspire and encourage others with his lifelong passion and dedication to sharing the gospel of Jesus Christ. This was Sammy's favorite hymn:

Sammy is survived by his three daughters – Roseanna, Shannon, and Salene – his grandchildren – Arianne, Austen, Cameron, Connor, Cayden, Linnea, and Barrett – and his great grandchildren – Aislinn, Clio, and Zoe. He is the last surviving sibling of Virgil, A.J., M.J., Mickey, Ophelia, Esther, Jewel, and Viola.

Sammy Maxwell was a man of faith who believed in helping his fellow man and loving his neighbor as himself. He was a loving father, grandfather, great-grandfather, and friend. He will be dearly and forever missed.
In lieu of flowers the family has asked that donations be made in Sammy's name to the Billy Graham Evangelistic Association. There will be a private viewing for the family in Houston, TX next week. There will be a celebration of life event in Summer 2021 in or near Kern County. To RSVP or reach out to the family contact [email protected]
Published by New Times San Luis Opisbo from Jan. 7 to Feb. 6, 2021.
To plant trees in memory, please visit the Sympathy Store.
MEMORIAL EVENTS
To offer your sympathy during this difficult time, you can now have memorial trees planted in a National Forest in memory of your loved one.
MAKE A DONATION
MEMORIES & CONDOLENCES
0 Entries
Be the first to post a memory or condolences.